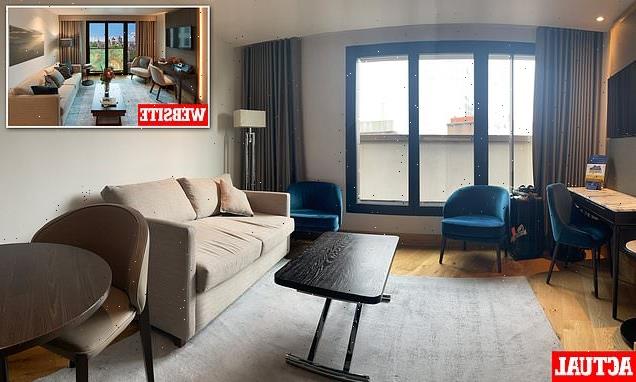 Disgruntled tourist posts a picture of his £380-a-night hotel room in London, complaining the reality ‘isn’t even close’ to the promotional image

A visitor to London has unveiled a picture that underscores how promotional images of hotel rooms can differ quite noticeably from reality.

Tourist Jerone Tan checked into the five-star-rated Tower Suites hotel in London, located mere yards from the Tower of London, expecting a ‘floor-to-ceiling outlook’ in his room, as depicted in one of the photographs displayed when he booked it.

The promo photograph showed the Tower of London beyond the windows, fresh flowers on the coffee table and desk, and patterned cushions. Mr Tan posted a photograph of the actual room to Twitter alongside a promo image, with his reality-check picture showing how an outside wall extends halfway up the windows and a total lack of Tower of London. The flowers, meanwhile, are conspicuous by their absence. 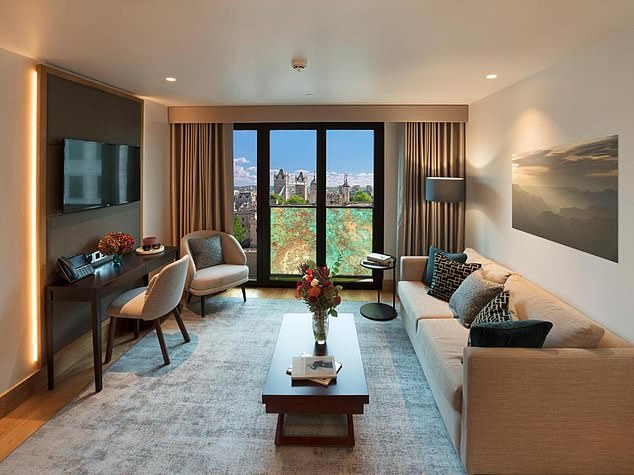 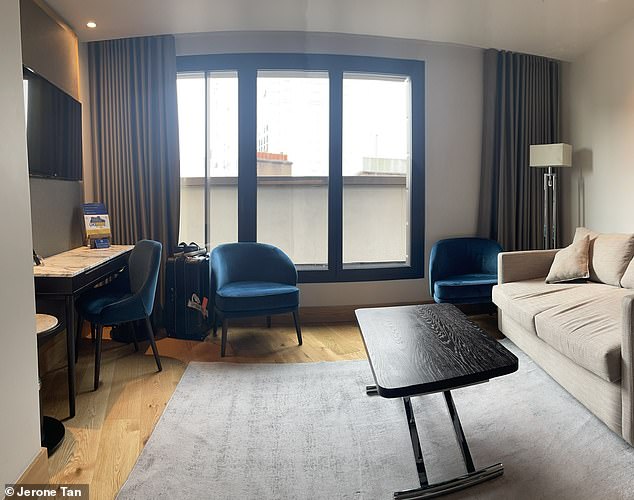 Mr Tan, 46, who lives in Singapore, told MailOnline Travel: ‘I wasn’t expecting a super view. What I expected was an outlook – floor-to-ceiling windows.

‘What we got was a wall covering most of the outlook. It felt really claustrophobic.’

The company that runs Tower Suites, Blue Orchid Hotels, tweeted to Mr Tan that ‘pictures on our website are for reference purpose only and rooms are not all identical, including the view’.

But Mr Tan argued: ‘At the end of the day, anyone will agree it is not even close to any of the pictures on the website.’

Mr Tan paid £1,138 for a three-night stay at Tower Suites in a ‘One-Bedroom Apartment’, but was upgraded one rung to a top ‘Signature Suite’ after checking in.

The booking.com page for a Tower Suites One-Bedroom Apartment that Mr Tan viewed

The Signature Suite is billed as having ‘magnificent views over the Tower of London’.

But Mr Tan stressed that his had a wall partially blocking the view.

He explained that he was moved to different rooms twice over after he checked in on Wednesday, June 22, after making complaints.

His second room – a One-Bedroom Apartment – had a ‘full view of train lines’, but was spoiled by an ‘electric buzzing noise’, which he said made sleep difficult.

Mr Tan, who works in banking, saw a return of the outside wall covering the windows in his third room – another One-Bedroom Apartment – which is the room he photographed and posted to Twitter.

Mr Tan decided to check out and stay somewhere else after just one night and was given a full refund for the two unused nights but only, he says, ‘after a whole series of complaints through social media and numerous exchanges with “Guest Relations”‘.

Mr Tan added: ‘They never apologised or admitted there was an issue.’

Tower Suites told MailOnline in a statement: ‘We regret that Mr Tan remained dissatisfied by the staff’s genuine endeavours to understand and resolve his concerns and elected to depart earlier than his scheduled date. The comfort of our guests continues to be our highest priority and we hope that Mr Tan will reengage with us to resolve his isolated concern.’

The hotel has hundreds of very positive reviews on Tripadvisor. But Mr Tan’s experience was not totally in isolation.

Tripadvisor reviewer ‘ti_boo34’ wrote on June 9 after a stay at Tower Suites: ‘We booked over the phone directly with the hotel asking to have a room with a nice view. [But] our room (724) was overlooking a very ugly building/wall. There was also a loud electric buzzing noise which was constant and very annoying at night.’

When asked if the experience had put him off visiting London in the future, Mr Tan replied: ‘London is one of my favourite cities in the world. So much energy, good and diverse food – yes, I totally believe that – and things to do. Unparalleled.

‘I would still visit London but will be very careful in choosing hotels, especially with the crazy prices at the moment. I would be careful with the local brands/chains.

‘I will likely stay in hotels that I have had a good experience in or stick with the international chains in future.’