Shoppers held back in the crucial lead-up to Christmas after splurging the previous month and as Sydney’s northern beaches were locked down amid a fresh coronavirus outbreak.

Retail trade was 4.2 per cent lower in December than in the previous month, preliminary Australian Bureau of Statistics data shows. 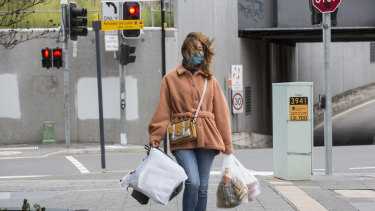 While this is a sizeable decline, Commonwealth Bank senior economist Kristina Clifton said it followed a 22 per cent lift in November, largely driven by Victoria as the state eased out of COVID-19 shutdowns.

In NSW, there was a 5 per cent fall over December, which Ms Clifton said was not surprising with the month “capturing the impacts of the lockdowns and restrictions on Sydney’s northern beaches”, which ran into early January as the state government worked to contained a cluster of cases.

“While it is disappointing to see this slowing in card spending, we see this as being temporary and expect spending growth to pick up now that restrictions have been lifted,” Ms Clifton said.

Despite the slump in the final month of 2020, trade was up 9.4 per cent over the year, the ABS data shows.

“It’s also pleasing given in-store traffic was down in CBD shopping centres due to the threat of the virus,” Mr Zahra said. “That was particularly the case in NSW after the outbreak on the northern beaches, which forced people to shop locally or online.”

“[The] data is a reminder of the bumpy nature of the recovery path for Australia,” Ms Masters said.

ABS director of quarterly economy-wide surveys Ben James said declines were recorded in five of the six retail industries measured in December, with the biggest fall in household goods after a surge in November.

Get our Coronavirus Update newsletter

Stay across the news you need to know related to the pandemic. Sent Monday and Thursday. Sign up here.