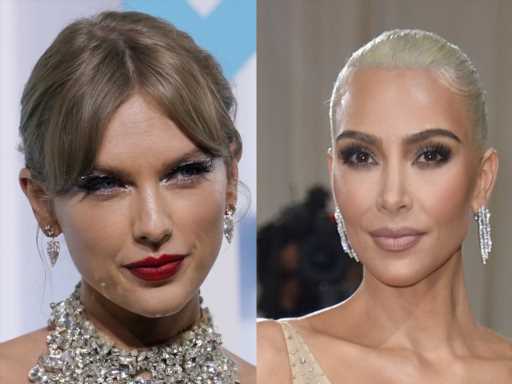 Taylor Swift’s upcoming album, Midnights, is already creating a lot of buzz, not only because she teased it at the VMAs on Sunday, but also because the date falls on Kim Kardashian’s birthday. The SKIMS founder will be turning 42 on Friday, Oct. 21, so it looks like there will be a lot of celebrating going on — although some people are wondering if that date was intentional on Swift’s part.

If anyone follows the “Love Story” singer closely, she is pretty crafty when it comes to Easter eggs, insider clues, and creative lyrics that often refer to details in her personal life. So, Swift seems to be resurrecting a 2016 feud with the reality star after Kim leaked the phone call of her then-husband Kanye West (who created his own mess when he hijacked her 2009 MTV VMAs acceptance speech) asking for permission to put a spicy lyric about her in one of his songs. “I feel like me and Taylor might still have sex,” was used even though the 32-year-old singer later said she never gave the green light — and the feud has been on the back burner simmering ever since.

If Swift is taking a swipe at Kim, let’s just say, the Swifties are definitely taking notice. “Taylor Swift at the VMAs 13 years after Kanye’s nonsense announced her 10th album is coming out on Kim Kardashian‘s birthday I’m laughing so hard I love Taylor so much,” one user tweeted. “our petty queen,” added another with an emoji of hands creating a heart shape. Another account joked, “She is so nice for giving her biggest fan such a nice birthday gift.”

There are too many signs pointing to a very deliberate power move by Swift. Oct. 21 is going to be her day, not Kim’s, this year. The headlines should be interesting — it’s only 53 days away.

Before you go, click here to see how Kim Kardashian’s life has changed over the years.