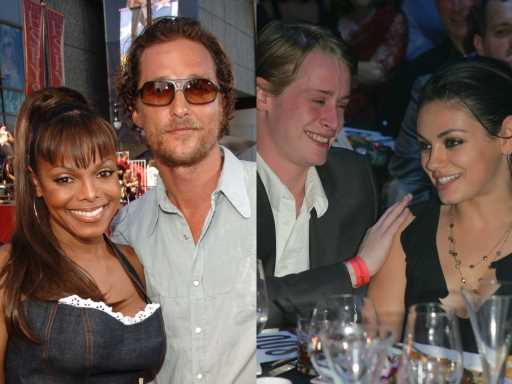 We would like to thank Cher and Val Kilmer for recently reminding us that they dated in the early 1980s. Even with a 14-year age difference, the couple fell “madly in love” and remain friends to this day. “He’s like nobody I’ve ever known,” Cher told People. “He is exasperating and hysterical. Thrilling and funny, and doesn’t do what anyone else does.”

That got us thinking, who else have we forgotten about in the archives of gossip dating history? It’s pretty common for two beautiful actors to hook up while away on set, so that’s often how these unusual couples wound up together in the first place. Do you remember Janet Jackson and Matthew McConaughey and their romance? We sure didn’t — and the two of them seem to have different versions of what exactly went down. And we completely forgot about the Cruz-Cruise relationship (aka Penelope Cruz and Tom Cruise) in the post-Kidman years.

So sit back and reminisce about the couples, who once called each other “bae” or maybe, boyfriend and girlfriend… or perhaps it was just a casual time together. Either way, Hollywood rarely forgets because the paparazzi often caught these infamous duos together. Let’s take a look at these long-forgotten famous duos.

A version of this article was originally posted on Aug. 2021.

This Holiday Cookbook With More Than 50 Recipes, Gives A Royal Insider Look at How to Create Easy Family Meals
Entertainment