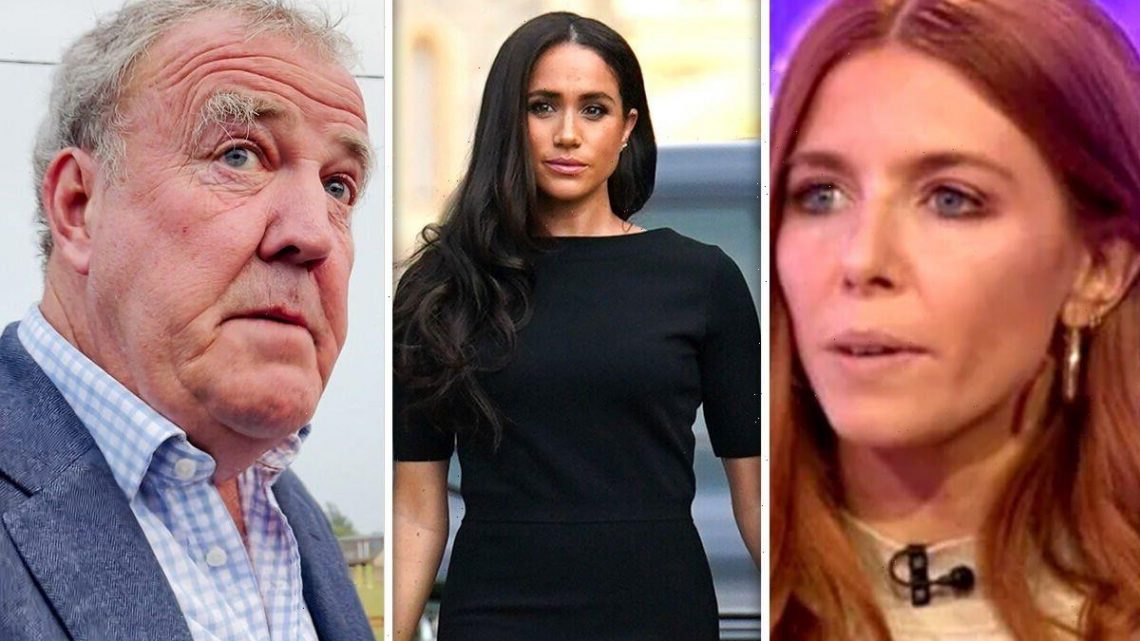 Stacey Dooley, 35, took to Instagram yesterday to break her silence on the “vile” remarks made by Jeremy Clarkson, 62, in his latest column. The former Strictly Come Dancing winner pointed out that, while she doesn’t usually like to comment on such matters in public, she felt she could not stay silent over the Clarkson’s Farm presenter’s comments.

On Sunday, Jeremy was slammed by a mixture of celebrities, high-profile figures and members of the British public after he described his hatred of Meghan Markle “on a cellular level”.

In the former Top Gear host’s latest column, he wrote: “Meghan, though, is a different story. I hate her.

“Not like I hate Nicola Sturgeon or Rose West. I hate her on a cellular level.

“At night, I’m unable to sleep as I lie there, grinding my teeth and dreaming of the day when she is made to parade naked through the streets of every town in Britain while the crowds chant, ‘Shame!’ and throw lumps of excrement at her.

“Everyone who’s my age thinks the same way,” he added in his article.

Express.co.uk contacted Meghan Markle’s representatives for comment at the time.

Jeremy’s rant was shortly met with outrage, as many celebrities took to social media to call him out for his behaviour.

Stacey is the latest celebrity to weigh in on Jeremy’s column, sharing her outrage in view of her 1.1 million Instagram followers.

“I really try not to comment or contribute to political/social commentary anymore because it always ends up misconstrued, often deliberately…” Stacey began.

“But I do feel like this is just so outrageous if you don’t call it out… What’s the point of a platform?

“Violence against women and general misogyny is a chronic problem,” she continued.

“What is wrong with [people]? They’ll dress this up as ‘not being silenced by the woke brigade’…

Prince Harry and his wife Meghan have sent shockwaves through the world with the release of their recent Netflix documentary, Harry & Meghan.

Some viewers found they sympathised with the couple, while others were left furious after the tell-all series was dropped on the streaming giant.

Nonetheless, many people seemed united this week over their condemnation of Jeremy’s article, with Carol Vorderman taking to Twitter to tell the star he should feel “shame” for what he wrote.

Carol called out Jeremy for his tirade against Meghan in view of her 513,200 followers, pointing out that it was “not ok on any level”.

She wrote: “NO Jeremy Clarkson. Not on any level, in any circumstance, is it ok to write this stuff about any woman.

“And absolutely NO to ‘everyone who’s my age thinks the same’. No no no.

“We absolutely do NOT think the same. Listen to the noise Jeremy. The crowds are chanting ‘shame on YOU’.” (sic)

Yesterday, Jeremy addressed the controversy on Twitter, writing: “Oh dear. I’ve rather put my foot in it.

“In a column I wrote about Meghan, I made a clumsy reference to a scene in Game of Thrones and this has gone down badly with a great many people.

“I’m horrified to have caused so much hurt and I shall be more careful in future.”

Emotional Kerry Katona ‘teary’ as panto keeps her away from kids