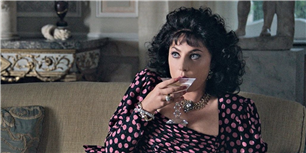 House of Gucci is arriving in time for Thanksgiving, rendering turkey completely irrelevant and giving you an amazing excuse to ignore your family in favor of Lady Gaga. Who, fun fact, went method for the role of Patrizia Reggiani.

Speaking to British Vogue, Gaga said “It is three years since I started working on it, and I will be fully honest and transparent: I lived as her [Reggiani] for a year and a half. And I spoke with an accent for nine months of that. Off camera. I never broke. I stayed with her.”

I mean. HER TALENT.

“It was nearly impossible for me to speak in the accent as a blonde,” Gaga added. “I instantly had to dye my hair, and I started to live in a way whereby anything that I looked at, anything that I touched, I started to take notice of where and when I could see money. I started to take photographs as well. I have no evidence that Patrizia was a photographer, but I thought as an exercise, and finding her interests in life, that I would become a photographer, so I took my point-and-shoot camera everywhere that I went. I noticed that Patrizia loved beautiful things. If something wasn’t beautiful, I deleted it.”

Gaga was actually so in the role that she didn’t even want to meet Patrizia herself, saying “I only felt that I could truly do this story justice if I approached it with the eye of a curious woman who was interested in possessing a journalistic spirit so that I could read between the lines of what was happening in the film’s scenes. Meaning that nobody was going to tell me who Patrizia Gucci was. Not even Patrizia Gucci.”

I mean…nothing to say but “talented, brilliant, incredible, amazing, show stopping, spectacular, never the same, totally unique, completely not ever been done before, unafraid to reference or not reference, put it in a blender, shit on it, vomit on it, eat it, give birth to it.”