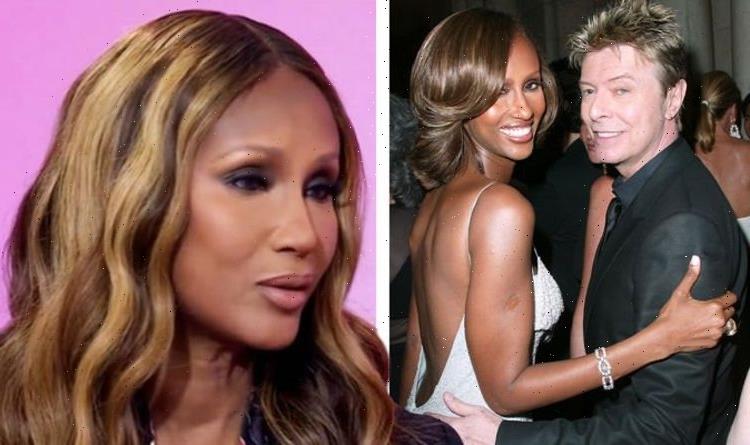 David Bowie performs Let's Dance on US TV in 2002

David Bowie’s widow Iman, 66, has opened up about why she will never remarry, despite it being five years since the singing legend died on 10 January 2016, following a battle with liver cancer. She admitted that even to this day, she still feels his presence around her and refers to him as her husband rather than her ex.

Bowie and the supermodel were married for 24 years and in a recent interview, she described her romance with the Space Oddity singer as “epic”.

“David said it was love at first sight,’ she gushed, recalling their meeting during a blind date.

“It took me a few months but I got there.

“I knew him as the man, David Jones, his real name, and not the rock star.”

The pair went on to marry in 1992, in an intimate ceremony in Florence, Italy, and they welcomed their now 21-year-old daughter Alexandria Zahra Jones, in 2000.

As with everyone who has lost a partner, Iman admitted that some days are “harder than others” when it comes to dealing with the fact David is no longer around.

But she finds comfort that “not all memories have to be sad”, as she has fond ones about how great their life together was.

“Sometimes I have to remind myself that I had 26 years,” she said.

“So I have that to sustain me.”

But when their daughter asked whether her mum would ever remarry, Iman stated it was a firm “no”.

“No, I will not. I still feel married,” she told PEOPLE magazine.

David’s death came as a shock to many, after having kept his liver cancer private.

Iman went on to explain that processing the loss of her beloved helped inspire her to create her first fragrance, Love Memoir.

She explained that the idea came to her after spending time in their upstate New York country house during the pandemic.

It had once been a place she had found “too painful” her to visit following his death.

“I just got very sad and would rush back to the city,” Iman admitted.

“I thought I had processed [the loss] but I had not.”

She went on to say that a nice sunset reminds her of the singer as he used to love them.

Why is everyone talking about Taylor Swift’s scarf?