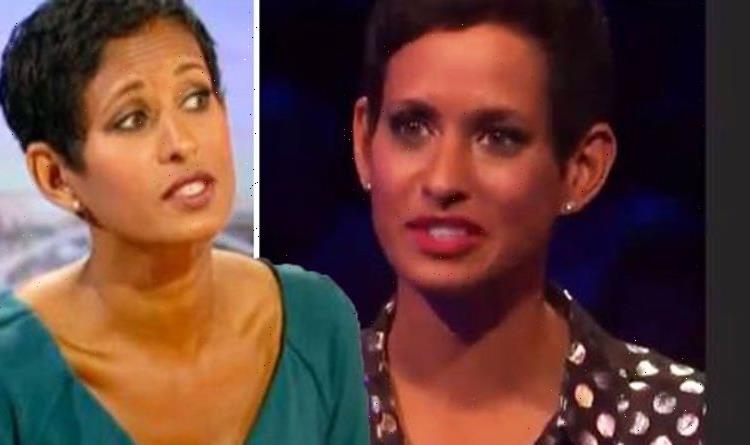 Naga Munchetty reveals she was told to 'steady' by producer

BBC Breakfast presenter Naga Munchetty has opened up about her time on the ITV quiz show, The Chase, admitting that she “remembered the fear” of filming the programme despite it being some time ago. The broadcaster, 46, took to Twitter to respond to a post by TV presenter Amanda Byram who she appears with on the programme this evening.

Still, I remember the fear!

In view of her 262,100 followers, the BBC presenter addressed her fearful experience on the quiz show, admitting that it was one she wasn’t likely to forget.

Naga wrote: “It was a while back!

“Still, I remember the fear!

“Looking forward to reliving it on @ITVChase tonight X,” she ended her post.

Naga was responding to a tweet TV presenter Amanda Byram had posted, where she agreed with Naga that the experience was “terrifying”.

Amanda penned: “@ITVChase was both and immensely fun and truly terrifying at the same time!!

“Set your reminders gang coz it airs tomorrow night (Saturday) 8:30pm @ITV and I had the pleasure of being on a team with @TVNaga01 @BrendanCole and @adamthomas21,” she added.

The Total Wipeout presenter had posted a short clip of herself chatting to host Bradley Walsh, where she spoke about her future presenting plans.

Speaking to Amanda, Bradley said: “You did Wipeout and with all the other TV shows you’ve done do you think you’d like to make a TV show about fitness and stuff?

“Because there isn’t a proper one for females,” he added.

Responding to Bradley’s comments, Naga looked unimpressed while shaking her head at the remarks.

“It would be a lot of fun to do that,” Amanda agreed.

“Because it’s guys normally that do it, isn’t it?” Bradley asked the star.

“That’s true, I’m going to make the way for women to do it, although I do love watching people fall off big red balls,” she said, referencing her time hosting Total Wipeout.

“Don’t we all!” joked Bradley.

The BBC star is a keen golfer and often shares snaps of herself on a green on social media.

Last month Naga was spotted in Scotland where she was enjoying a well-deserved golfing break.

After fans took to social media to try and work out where she was, they came across a few retweets from Naga herself, showing her golfing up north.

The Scottish golf course where she stayed, tweeted: “Great to see Naga Munchetty from the BBC playing on the Links today at Fortrose [and] Rosemarkie Golf Club.

“Great player with a [seven] handicap too. We hope you have a great time in the Highlands of Scotland.”

The Chase Celebrity Special is on tonight at 8.30pm on ITV.