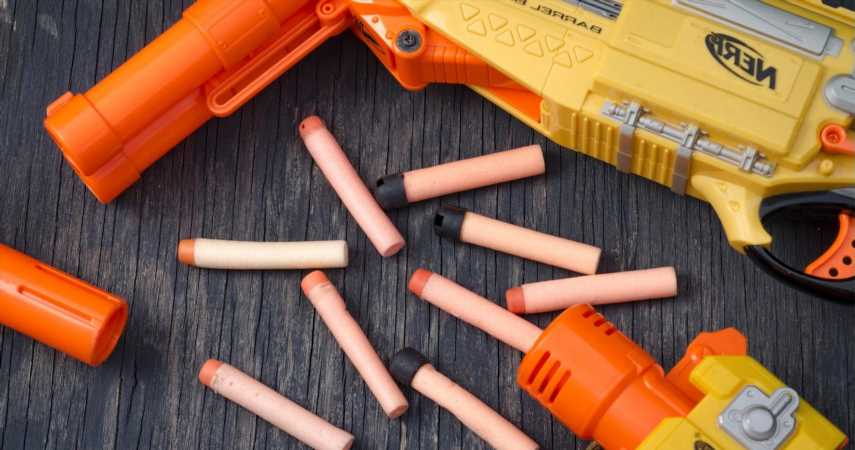 Back in the late 80s, Hasbro’s Nerf made history with simple dart guns. Kids loved them because they could pelt friends and family, and the adults didn’t mind because the foam was unlikely to cause much harm.

With huge popularity, Nerf set to work creating more unique and collectible versions, and still, today, if you’re purchasing a gift for a ten-year-old boy, it’s a sure bet, a Nerf gun would be welcomed. The longevity of the Nerf brand has allowed for collections and increased worth over the years. For those hard-core collectors, a Nerf gun in the original package can be quite pricey.

Those expensive sets are in high demand today, reeling in a nice profit for Nerf and continuing their marketing and popularity of new releases.

Check out the most expensive Nerf guns in 2021.

Truly one of the first Nerf products and a source of many memories is the Master Blaster, hitting shelves in 1992. Two barrels that hold up to four balls at once allow for quick Nerf attacks and quickly became one of the coolest products on the market. According to Wealthy Gorilla, the piece was only sold for a limited time, making it all the more valuable.

The name alone sounds like a cool Nerf gun you want to have at your disposal. With 24-darts in a rotating drum, the MEGA line featured a variety of blasters that could throw darts more than 100 feet. The piece alone is large (think Mastodon) with a lot of power and more ammo than other Nerf products before it. If the Mastodon is simply too large, you can always go for the Megalodon, a smaller version.

Originally called the ‘Attacknid’ because of its spider-like shape, the TerraDrone wasn’t hugely popular at the time. Perhaps it was because the drone craze had not yet hit society, or perhaps the high cost of the product on shelves put it out of reach for some families. Those close to the Nerf product line hope to see cameras or smart devices added to enhance the relatability for young Nerf followers.

Released in 1995, the original crossbow was sold for around $25, but the piece has impressed Nerf collectors, and it’s now worth nearly ten times its value. One reason the product was so popular was the ability to customize it, and besides, the purple color might also prompt young girls to get involved in the game.

The Nerf gun uses discs for speed and accuracy. The magazine of 40 discs and attached rail for additional accessories provides a longer time for fun and doesn’t have to be reloaded as often. The sleek design is thought to be one of the best disc-shooting guns ever made, according to Luxatic.

A change from foam bullets to laser tag aim, the two guns come together and use pinpoint sights to hit the target. Each gun has a rumble and recoil, different from similar laser tag guns available and another positive – you don’t have to pick up those bullets in the end.

Hasbro released the signature Nerf bow long before bow and arrows became popular with films like the Hunger Games series. In a marketing plan that led Nerf to partner with the YouTube channel Dude Perfect, they were able to create a following for the product that can launch up to 105 feet. Today, the bow doesn’t appear to be in high circulation, making it a rare find for collectors.

One of Nerf’s most unique pieces is the one and only shield/blaster. The shape, like a manta ray, provides a wide blocking range, with two multiple barrels, giving the player double the chance to hit their target. No longer on the market, the Manta is a prized possession among collectors.

READ NEXT: The 10-Year-Old Millionaire: How Ryan Kaji, A Kid YouTuber, Grew A Multi-Million-Dollar Net Worth

Ian Wright net worth: How much money has new Moneyball host made? Ian’s millions revealed