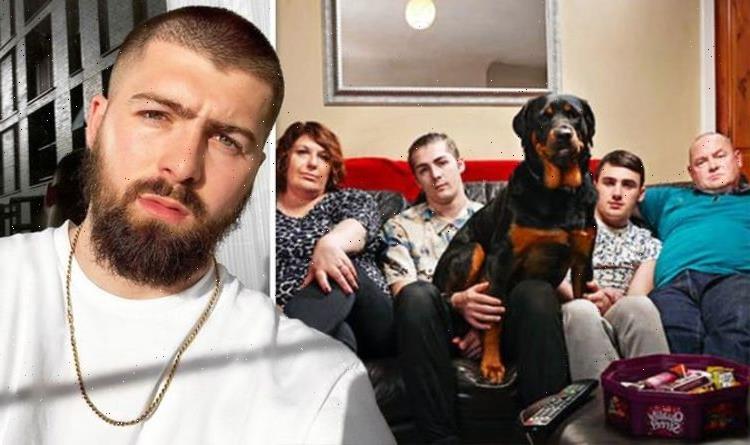 Gogglebox star Tom Malone has taken to Twitter to share that he feels like a “criminal” for no longer wearing a face mask in shops. The TV personality responded to social media users who he claimed posted “judgemental” comments following his latest Tweet, before revealing why he is exempt from wearing a covering.

Anyone else feel like a criminal when they go in shops without a mask on now?

In view of his 72,600 followers, the Channel 4 personality hit back at the backlash he had received, after revealing that he was now visiting shops without a face covering.

He wrote: “Getting a lot of judgemental comments on this tweet saying I should wear a mask to protect the vulnerable.”

However, Tom went on to claim that he is exempt from wearing a mask due to a medical condition.

He continued: “For the record I’m asthmatic (exempt) and I still wear a mask 90 per cent of the time.

“My chest was tight today so I took it off.

“You can stop judging me now,” he finished, followed by a thumbs up.

The TV star’s tweet comes after he confessed to feeling like a “criminal” after deciding to forgo a face mask in the wake of the easing of Covid restrictions around the country.

Yesterday, Tom asked his followers: “Anyone else feel like a criminal when they go in shops without a mask on now?”

As of July 19, it is no longer a legal requirement to wear face masks in shops and indoor business settings.

Following the star’s post, social media users weighed in on the debate over whether face masks should continue to be worn in the face of rising coronavirus cases.

One Twitter user wrote: “You wear a mask to protect others not yourself and the ones who are giving you the evil eye are probably clinically extremely vulnerable or have lost a loved one to Covid.”

Another commented: “[I] wouldn’t know. Wearing a mask is a very small inconvenience to protect the health of others.”

A third asked the TV personality: “Would it kill you to keep wearing a mask? No but it might kill someone if you don’t.”

“I wear one most of the time but when my chest is tight I take it off. Don’t assume that young people can’t have underlying health issues too,” he wrote.

However, many social media users also defended the star’s right to not wear a face covering.

Sympathising with the reality star, one fan added: “People are so judgemental. I’m asthmatic and I have panic attacks and I feel like every day I avoid going out incase I’m judged for not [wearing] one.”

Another wrote: “I’m asthmatic but wore a mask throughout. But not anymore now it’s not law.

“We have to get back to normality. It felt weird without it but good.”

Celebrity Gogglebox is on Channel 4 on Fridays at 9pm.