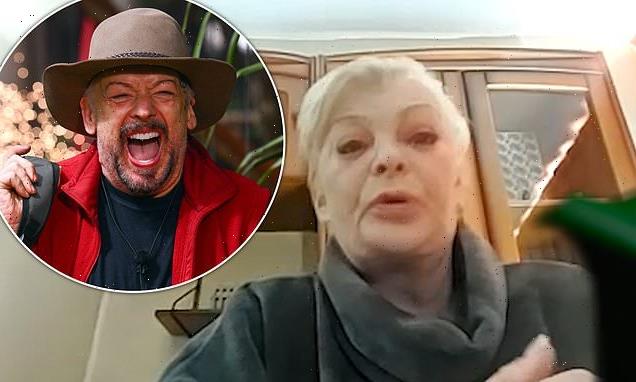 ‘Some people can’t even pay their electricity bills!’ Crissy Rock slams the ‘obscene’ amounts of money ‘greedy’ I’m A Celeb stars are being paid this year as she joins Jungle Confidential

Crissy Rock has slammed the ‘obscene’ amounts of money the ‘greedy’ I’m A Celebrity… Get Me Out of Here! stars are being paid this year as she joined MailOnline’s Jungle Confidential podcast.

The actress, 64, – who was a contestant on the 2011 series of the show – fumed that ‘some people can’t even pay their electricity bills’ while the TV stars pocket thousands for just a few weeks work. 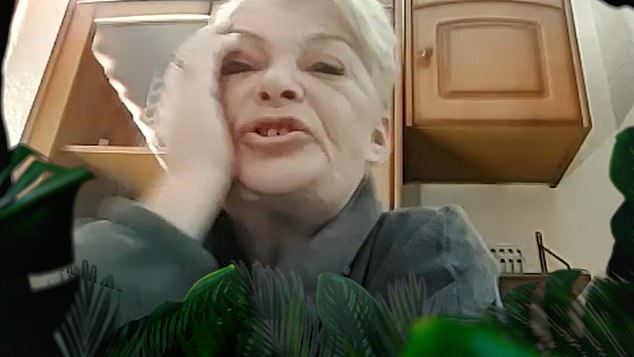 Not happy: Crissy Rock has slammed the ‘obscene’ amounts of money the ‘greedy’ I’m A Celebrity … Get Me Out of Here! stars are being paid this year as she joined MailOnline’s Jungle Confidential podcast

Speaking about the amount they’re being paid she said: ‘We didn’t get much money to go on back in my day. When I went in I had nothing to prove – I didn’t go in to win.

‘We never got anything like that money they have now. You have to give half of your wages back to the Australian government. 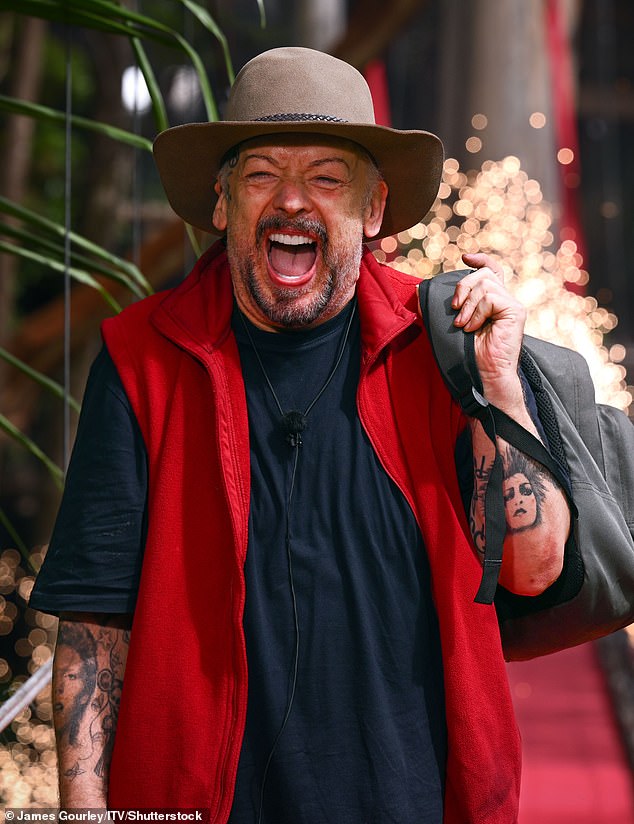 Woah! It has been reported that Boy George (pictured) was paid £500,000 for his time on the show while former Health Secretary Matt Hancock will pocket £400,000 and Mike Tindall will leave with £265,000

Love Island’s Olivia Attwood will receive £125k, while Sue Cleaver will walk away with £115k.

The reality star left fans shocked after being forced to quit the jungle on medical grounds after 24 hours but is reportedly still being paid the full amount.

Next up is retired England Lioness Jill Scott who is earning £100k from her appearance. 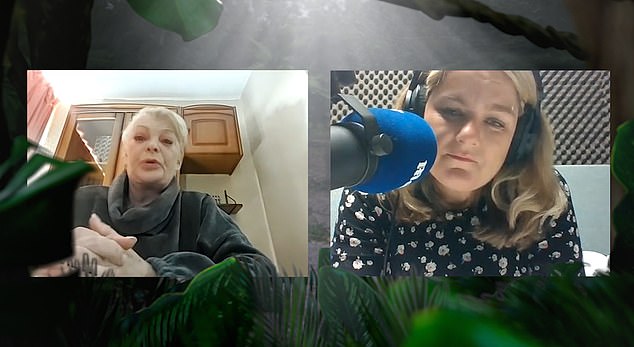 Reaction: The actress, 64, – who was a contestant on the 2011 series of the show – fumed that ‘some people can’t even pay their electricity bills’ while some stars pocket thousands for just a few weeks work

Charlene White’s contract for being on the show is £75k, while Scarlette Douglas and Babatunde Aleshe’s is £65k.

Hollyoaks star Owen Warner will take home £60k, finishing off the £2.1million budget spent on the I’m A Celebrity line-up this year – one of the biggest bills in the show’s 20-year history.

The I’m A Celebrity cast this year are the richest yet, with a combined net worth of over £76 million, according to reports. 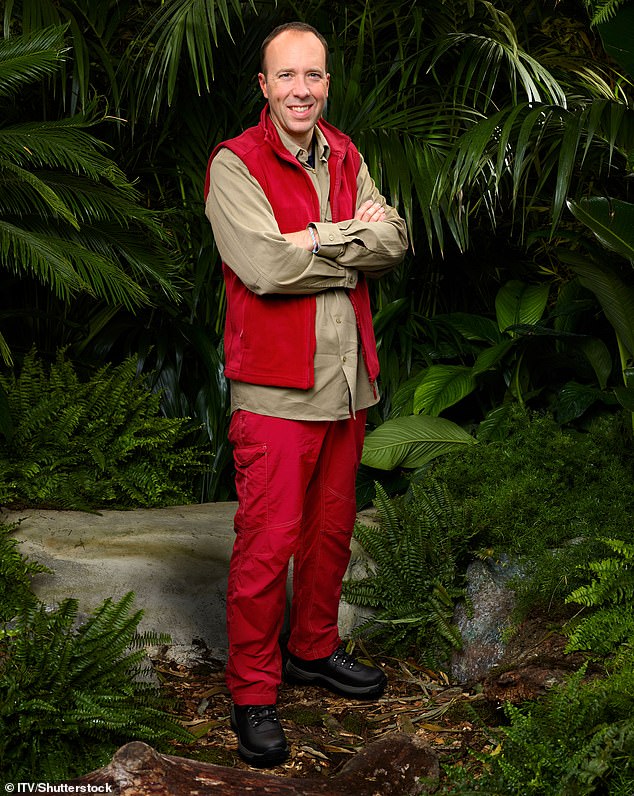 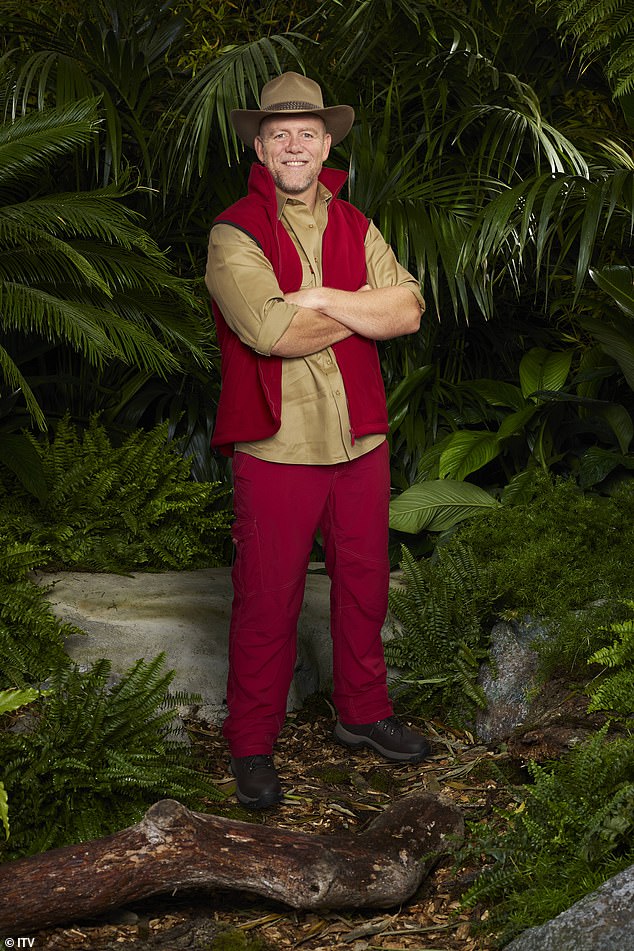 Royalty: Mike Tindall is the third highest paid celebrity in the jungle this year and will leave with £265k

Boy George tops the list at a predicted £43.8m while Mike, 44, married to the King’s niece Zara Phillips, follows with an eye-watering £15.7m.

A source recently insisted the cast haven’t signed up for the ITV reality show due to being short of cash.

They told The Sun: ‘People think stars only sign up to I’m a Celebrity for the money but a lot of this year’s contestants are already rolling in it. Forget the money, they want the memories.’ 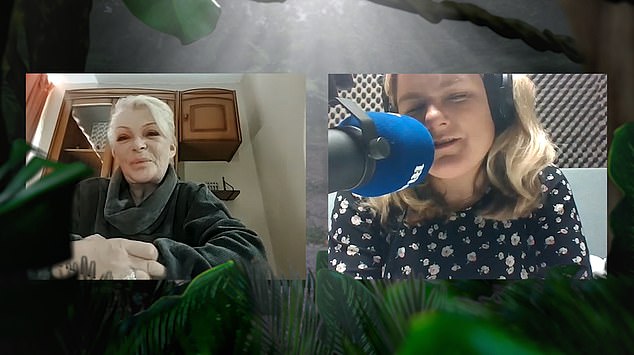 Elsewhere in her podcast chat Crissy admitted she feels like the stars this year are a little two-faced.

She explained: ‘They’re all a little bit too faced aren’t they! And it’s coming across. They’re talking to people going ‘oh hi we’re friends’ and then we’re walking off and calling them stuff!’

Crissy also had plenty of opinions on Matt being in the jungle, saying his appearance is a ‘slap in the face for everyone in the country.

She explained: ‘Personally I’m not into politics but I thought it was a slap in the face for everybody in the country when he went in. And the way it’s going he could actually win, he’s good at all the trials and he’s took it all on the chin. 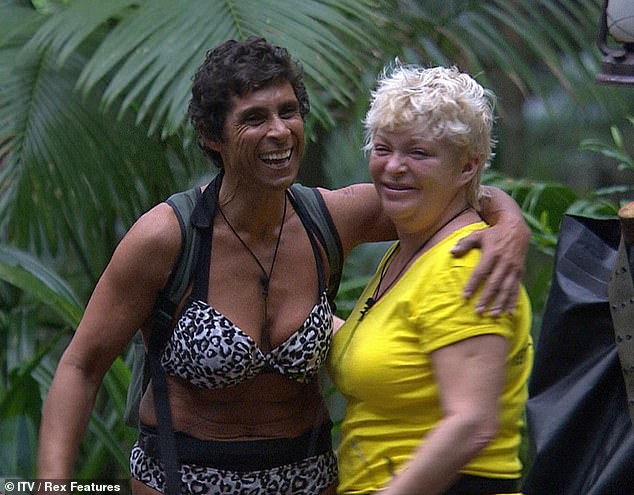 Duo: Crissy (right) appeared on I’m A Celebrity back in 2011 – she is pictured above with fellow contestant Fatima Whitbread

‘If it was me in there I would have said I’m not talking to you because I wouldn’t be too faced about it.

‘People were dying on their own it was horrible and so to put him in that spotlight – it was a slap in the face for everyone in the country who lot people, lost jobs and lost homes when they were partying.’

When asked if she liked him more after he won stars and brought back meals she said: ‘No! It’s a bit like when your auntie who you don’t like goes to ASDA and gets a few bits and you’re like ‘ah ta!’.

The other big controversy this year has been a sexism row after Charlene White, Sue Cleaver and Scarlette Douglas were the first three to be voted out by the public. 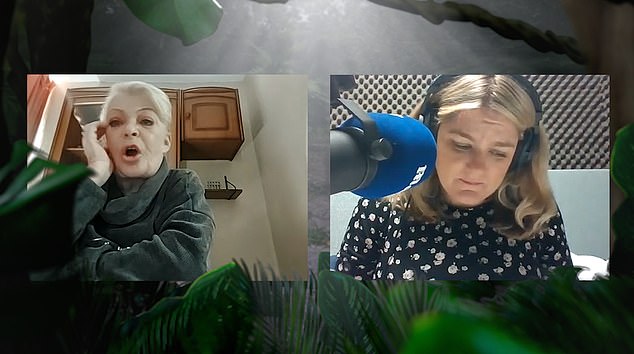 Honest: Speaking about the amount they’re being paid she said: ‘We didn’t get much money to go on back in my day. When I went in I had nothing to prove – I didn’t go in to win’

3. Mike Tindall: Mike Tindall is the third highest paid celebrity in the jungle this year and will leave with £265k

8. Jill Scott: Next up is retired England Lioness Jill Scott who is earning £100k from her appearance.

12: Owen Warner: Hollyoaks star Owen Warner will take home £60k, finishing off the £2.1million budget spent on the I’m A Celebrity line-up this year – one of the biggest bills in the show’s 20-year history

She said on the matter: ‘The women my year went out early too and they were doing shower scenes. But maybe people are looking for real people and not ones like that!’

‘Maybe Charlene, Sue and Scarlette weren’t pulling their weight. Maybe the public wanted them out so they could see what the others could do.

‘I would love Jill to win. That first trial was amazing when she just walked out onto the plank like she was crossing a road, there was no fear just sheer power.

‘She seems to lovely and does deserve to win.’

On who she wants in the final Crissy added: ‘I like Owen, he was an airhead but he’s not he’s such a gentle soul. I like Jill but I would boo the TV if Matt won!’

I’m A Celebrity will air every night of the week and both weekend nights after the launch – all at 9pm. 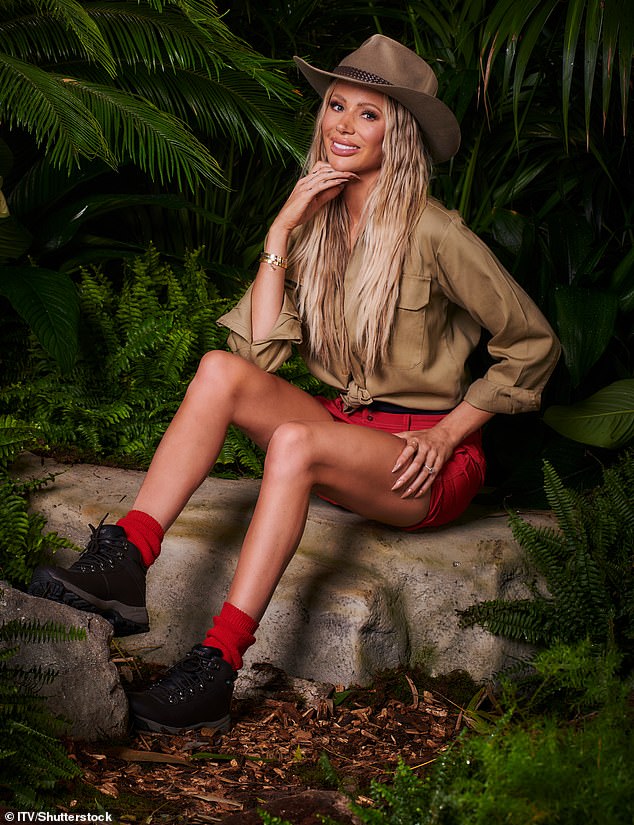 Appearance: Love Island’s Olivia Attwood will receive £125k, while Sue Cleaver will walk away with £115k 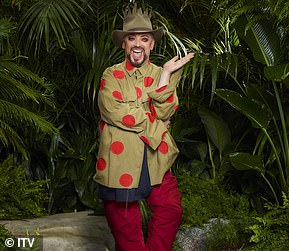 MISSING ANY BIG OCCASIONS? No, I am going straight into the jungle from playing at various festivals and gigs

ROLE IN THE CAMP: In-house dietician reassuring everyone that they will be ok on the jungle diet. And entertainer – I will sing!

BEST ATTRIBUTE: I am a very positive person and I don’t bear any grudges

DREAM CAMPMATE: It would be funny if my ex, Jon Moss, comes on the programme -but I don’t think that will happen! 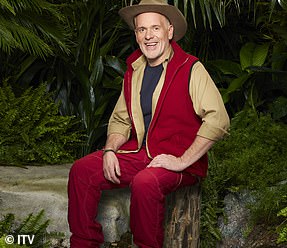 PHOBIAS: I am petrified of heights. I ended up carrying the bags when we took my girlfriend’s niece once to Go Ape as I am so petrified!

MISSING ANY BIG OCCASIONS? A friend’s birthday, a wedding, and Leeds United matches

ROLE IN THE CAMP: Entertainer. Hopefully I can help shorten everyone’s boredom.

BEST ATTRIBUTE: Hiding food! I am going to fly out early and sneak into the jungle and hide pot noodles everywhere, then I will be everyone’s best friend!

DREAM CAMPMATE: Ant and Dec…let’s see how they cope for 24 hours! 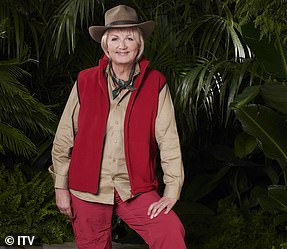 PHOBIAS: Don’t be ridiculous! I am not going to admit to what I fear most!

MISSING ANY BIG OCCASIONS? Coronation Street and we are expecting another grandchild any day, so hopefully it will arrive before I fly out to Australia.

ROLE IN THE CAMP: I will be more of a mum – that is where I will naturally fit.

BEST ATTRIBUTE: I can cook and I am a good listener, so hopefully I will be a friendly ear for everyone.

DREAM CAMPMATE: Good Morning Britain’s Richard Arnold. He is my TV husband and it would be lovely to have an ally in camp! 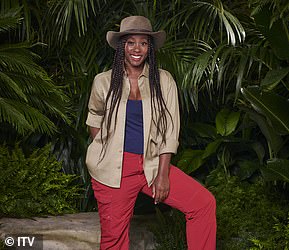 CLAIM TO FAME: Presenter of A Place In The Sun

PHOBIAS: Spiders. There is no point in lying about it! I’ve got an irrational fear about them

MISSING ANY BIG OCCASIONS? Just a holiday which I can postpone

ROLE IN THE CAMP: Mum, cook and morale booster. I always like to look at the positive side in life

BEST ATTRIBUTE: I can cook and I will be good at making sure everything is tidy in camp

DREAM CAMPMATE: Mo Gilligan. He is hilarious and I totally fancy him! 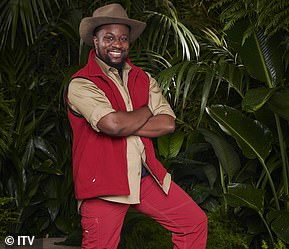 PHOBIAS: I am scared of absolutely everything. Snakes, rats – I am fearful of them all and I am dreading the trials

MISSING ANY BIG OCCASIONS? I was going on tour but we’ve postponed it now until next year

ROLE IN THE CAMP: Tension breaker. If I can break tension anywhere it starts up in the camp, then I will do that. We don’t need to be bickering as it will be a first-time experience for everyone

BEST ATTRIBUTE: Hopefully I will bring some humour to the camp

DREAM CAMPMATE: I am a big Arsenal fan and so any ex-Arsenal player would be great. I am looking forward to chatting to Ant & Dec about football 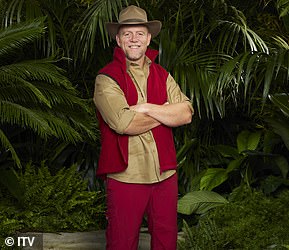 PHOBIAS: I haven’t admitted to having any phobias but in a weird way, I am looking forward to taking part in the trials!

MISSING ANY BIG OCCASIONS? My podcast series and the rugby Internationals this autumn

ROLE IN THE CAMP: Morning motivator. I would like to see everyone get on well and us all have a great experience

BEST ATTRIBUTE: I am a positive person

DREAM CAMPMATE: Samuel L Jackson would be cool. He has lived the life! 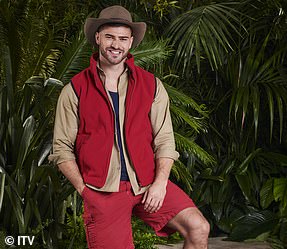 MISSING ANY BIG OCCASIONS? I am a big fan of football so I will miss watching the start of the World Cup

ROLE IN THE CAMP: Entertainer and games coordinator

BEST ATTRIBUTE: It is definitely not my cooking skills or brains!

DREAM CAMPMATE: Any of the Leicester City starting 11! 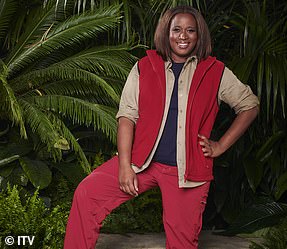 PHOBIAS: I am not sure what my fear factor will be because I’ve never had rodents, spiders and snakes crawling all over me!

MISSING ANY BIG OCCASIONS? My children’s annual school ball which I am gutted about

ROLE IN THE CAMP: Mum and cook. I don’t mind falling into that position

BEST ATTRIBUTE: I like to listen and talk. I love learning about people and I have a natural curiosity for people 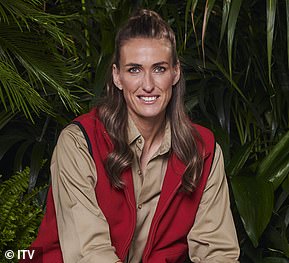 PHOBIAS: I don’t like rats and the thought of being underground fills me with fear!

MISSING ANY BIG OCCASIONS? The Men’s World Cup. I am going to find it weird not being able to know how the men are getting on in the tournament. Hopefully they will still be in the tournament when I come out of the jungle

ROLE IN THE CAMP: Helping hand. I like to help people if they aren’t having a good day

BEST ATTRIBUTE: Hard worker. I will always find a way to add value. I am also very honest

DREAM CAMPMATE: Another sports person would be great as it would be someone to bounce ideas off. 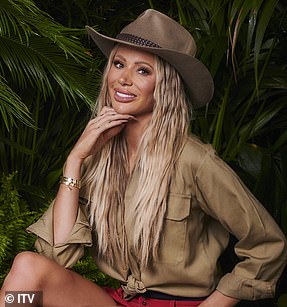 PHOBIAS: I hate the dark so I’m keen to avoid any challenges in the darkness

MISSING ANY BIG OCCASIONS? No, had the show been on air any later, I could have missed my sister’s wedding

ROLE IN THE CAMP: Clown. I was always the class clown at school and I love having a laugh

BEST ATTRIBUTE: I don’t take myself seriously and I have got a good sense of humour

DREAM CAMPMATE: A pop legend like Dolly Parton who has amazing stories to tell