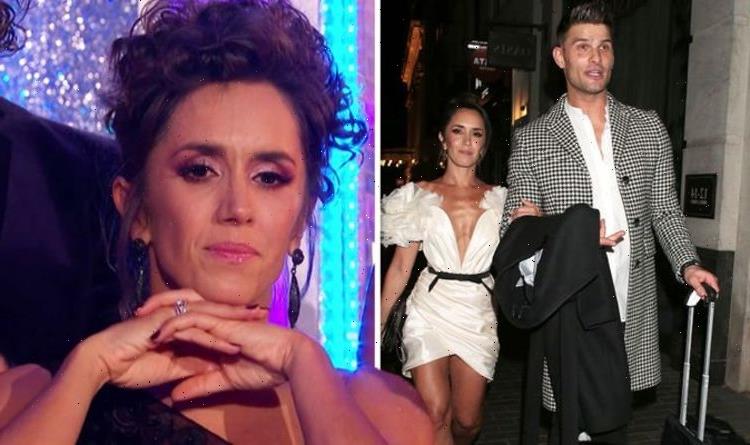 ‘All we bicker about!’ Strictly’s Janette Manrara addresses backstage moment with Aljaz

Janette Manrara, who quit the dance floor earlier this year, caused a social media meltdown when she and her husband Aljaz Skorjanec reunited for the Strictly Come Dancing 2021 final for an electrifying routine. The It Takes Two presenter has opened up about her relationship with her other half after being questioned if things can get “heated” between the pair while in dance rehearsals.

The 38-year-old admitted that the couple are not “perfect” but added they’re both very “passionate” when it comes to dancing.

The American-born performer revealed the pair do “bicker” but it’s usually to do with their height difference.

Her comments come after the pair caused a stir with viewers and their famous friends alike on Strictly earlier this month.

Speaking in a new interview, Janette described their chemistry as “magical”.

When quizzed about working with Aljaz and if things ever get “heated” between the couple, Janette chuckled: “Ha! We’re both very passionate but no, when we dance together it feels magical, it doesn’t feel like real life.

“It’s a feeling I can’t even begin to explain.”

She continued: “I met Aljaz on tour – the first thing I saw of him was his dancing, and vice versa.

“All we bicker about is the fact that he’s so tall and I’m so short!”

The former Strictly dancer went on to address why she works so well with her husband.

Janette explained that the couple became friends before they ever began dating.

“We’re best friends, before anything else,” she added to Best magazine.

“We’re not perfect but we’re very much in love.”

During the Strictly grand finale, the Slovenian-born star and Janette smouldered with a romantic routine, while Ed Sheeran performed Bad Habits behind them.

Reflecting on the dramatic night, Aljaz stated at the time: “When people say to me ‘count your blessings’ this is what I am gonna have in my mind.

“I have missed dancing with my @jmanrara this year.”

He continued: “The most beautifully expressive and emotional dancer that I have ever seen just happens to be my Bucka.

“Watching her excel on ITT [It Takes Two] has made me the proudest I’ve ever been of her, but getting her back into my arms to dance with @teddysphotos was MAGICAL!”

After meeting at a dance studio in 2009, the couple became engaged and later married during their time as Strictly stars.

The pair marked their reunion with three ceremonies in 2017, one in London, another in Janette’s home of Miami, and the third in Aljaz’s home in Slovenia.

The Strictly duo has celebrated the festive period with Aljaz’s family back in his hometown.

Taking to Instagram, the pair shared a series of snaps of their family getaway.

Back to Broadway & Better Than Ever!