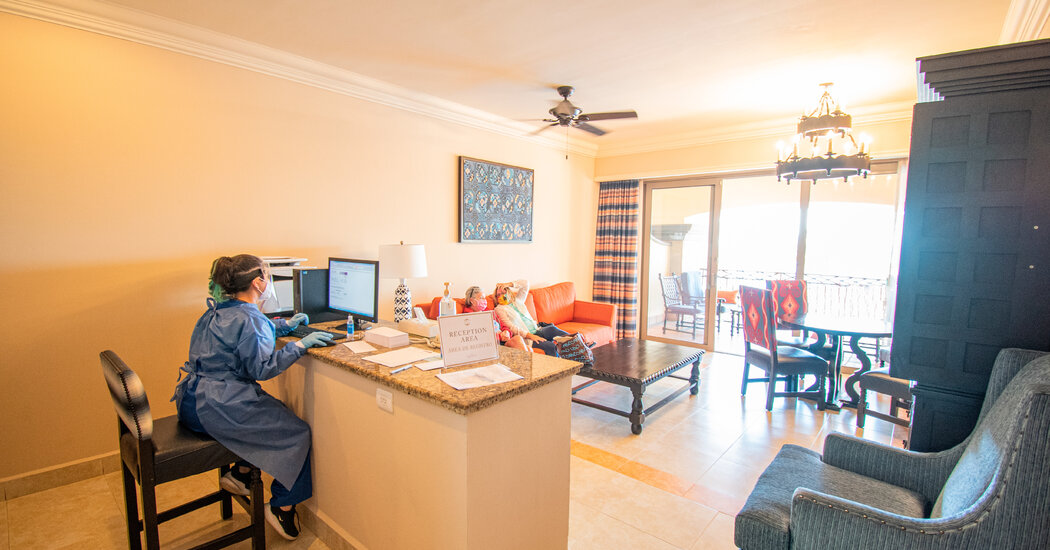 Testing Requirement Is the Latest Curveball for the Travel Industry

In December, the tourism board for Los Cabos, the popular Mexican resort city on the Baja peninsula, began hearing whispers that soon people would need to have proof of a negative coronavirus test in order to travel to the United States by plane from any foreign country.

Over the next several weeks, nearly every member of the Los Cabos tourism industry came together to create a testing plan that allows people heading to the United States — and that includes returning American citizens — to get a coronavirus test at almost every hotel in the area. Even the Los Cabos International Airport has been outfitted with a testing area, although guests are encouraged to get tested at their hotels to keep traffic at the airport moving.

“There is one hotel association in the destination and that helps us coordinate,” said Rodrigo Esponda, managing director of the Los Cabos Tourism Board, adding that the reassurance provided by testing could help the travel industry get back on its feet. “We want everyone to be easily tested and it should be affordable because that gives everyone more confidence.”

Their efforts will be under scrutiny starting on Tuesday, when the testing requirement officially goes into effect and returning Americans and all other inbound travelers flying into the United States must present proof of a negative test for the coronavirus. For months, many other countries have been requiring a negative test for people to travel, but the United States has been less strict in its travel requirements.

While travel globally will be affected, especially in light of the Biden administration’s decision to ban travel — excluding that of American citizens — from Brazil, South Africa, Britain, Ireland and 26 countries in Europe that allow travel across open borders beginning Monday, the biggest impact of the testing rule will be for destinations in the Caribbean and in Mexico, which have continued to attract American leisure travelers who are banned from other parts of the world.

“We keep getting curveballs thrown at us in our whole industry,” said Jason Kycek, senior vice president of sales and marketing at Casa de Campo, a golf-and-beach resort in the Dominican Republic that is expanding its existing on-site testing facilities. “The finish line keeps moving, but we are staying on top of things and making sure our guests have what they need and can travel safely.”

For one traveler: ‘minimal hassle for the extra peace of mind’

Under the new requirement, people will need to get tested no more than three days before their scheduled flight, showing a negative result to their airline before boarding. Those who have already had the virus will need to show documentation of recovery in the form of a recent positive viral test and a letter from a health care provider or a public health official stating they were cleared to travel.

Alyssa Flynn, a 29-year-old music teacher from New Jersey, was asked to show a negative test result before her flight from Istanbul to New York on Friday.

“The whole process was very easy. A nurse came to my Airbnb, did the P.C.R. swab test and I had my results seven hours later, which was 24 hours before my flight. It cost 30 bucks total,” she said in a telephone interview.

Ms. Flynn showed her test results on her phone at the Turkish Airlines check-in counter at Istanbul Airport and kept a printed copy in case it was required when she landed.

“No one asked to see the results again, so it really was minimal hassle for the extra peace of mind,” she said. “ It’s comforting knowing that everyone else on the flight has tested negative, especially with all these new variants raging.”

The United States will accept results from rapid antigen tests, while other countries have been asking for what are known as polymerase chain reaction tests, or P.C.R. tests. Antigen tests have been found to be less reliable than P.C.R. tests.

Josh Walker is the chief operating officer of Nomi Health, which provides about 4 percent of the testing in the United States, conducting laboratory work and setting up laboratories, as well as working with many hotels in the Caribbean. Mr. Walker said that because antigen tests are less sensitive, some travelers could test negative and still be infected because their body’s viral load is not high enough for identification purposes.

“There will likely be a lot of discussions of what type of tests qualify because, let’s put it this way, if I want to find a negative test, I can find it,” he said, adding that the Centers for Disease Control and Prevention has not given that level of guidance just yet.

Mexico and countries in the Caribbean have remained popular destinations for American travelers even as other destinations closed their borders, in part because of their proximity to the United States, making them relatively easy and affordable to reach. In the fall, several U.S. airlines added flights to the Caribbean islands and to Mexico at a time when routes elsewhere were being cut. In November, nearly 500,000 Americans flew to Mexico alone, according to official figures.

Casa de Campo, the Dominican Republic resort, is about five minutes away from a hospital which shares ownership with the resort. The resort had already been offering antigen tests to guests heading to some European countries and Canada, where negative tests have been required since last year, but now with the U.S. requirement taking effect, the team at Casa de Campo has converted two adjoining rooms at the resort into a testing suite, with one room serving as a waiting area and the other as “something like a doctor’s office” with a nurse testing people inside, said Mr. Kycek.

Casa de Campo is not alone: Hotels and resorts across the Caribbean have been ramping up their testing efforts. More than 20 hotels on the island of St. Lucia are offering complimentary rapid antigen testing, and authorities and hoteliers said they were prepared to meet U.S. travelers’ testing demands. In the Bahamas, Caerula Mar Club in South Andros administers rapid antigen tests on-site in a sanitized location by appointment for people who are traveling together and considered a “pod,” or individually, if preferred.

Most Caribbean and Mexican resorts and airports offering testing will send guests an email or provide a printed piece of paper signed and stamped by health officials affirming the negative result.

For an industry already decimated by the pandemic, the new testing requirement may cut into any business rebound.

“U.S. travelers had been showing growing confidence in travel, including a demand for international trips, prior to the new C.D.C. requirement that they must receive a negative Covid-19 test prior to re-entry,” said Meghan Moncrief, chief marketing officer at Squaremouth, a travel insurance comparison site. “This latest regulation exhibits the ongoing uncertainty of travel.”

Words to Know About Testing

Confused by the terms about coronavirus testing? Let us help:

10 of the best whitening toothpastes for intense stain removal