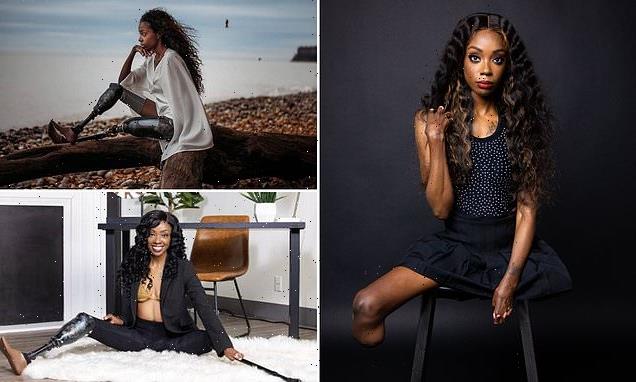 Woman shares how 'menstrual cramps' turned out to be SEPSIS

Model, 30, who assumed stabbing stomach pains were just menstrual cramps learns she has SEPSIS that left her DEAD for eight minutes – and forced to have both legs amputated

A woman who thought the stabbing pain in her stomach was just severe menstrual cramps discovered that she was actually suffering from sepsis — and the condition caused her to die for eight whole minutes.

Milwaukee, Wisconsin-based model Kia Brazil assumed that it was her period that left her in terrible pain in 2019, but when it grew so terrible that she took an ambulance to the hospital, she was told she was in fact in the throes of a deadly infection.

The 30-year-old’s heart stopped three times as doctors prepped her for surgery, during which they amputated her left leg — and she went on to spend weeks in a medically-induced coma before waking up and having to undergo further amputations. 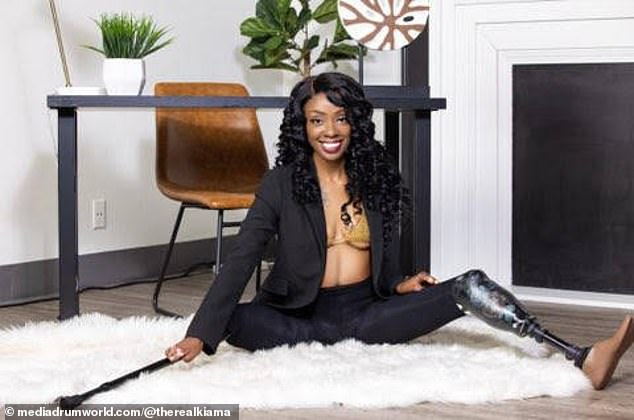 Scary stuff: Milwaukee, Wisconsin-based model Kia Brazil assumed that it was her period that left her in terrible pain in 2019, but she was actually suffering from sepsis 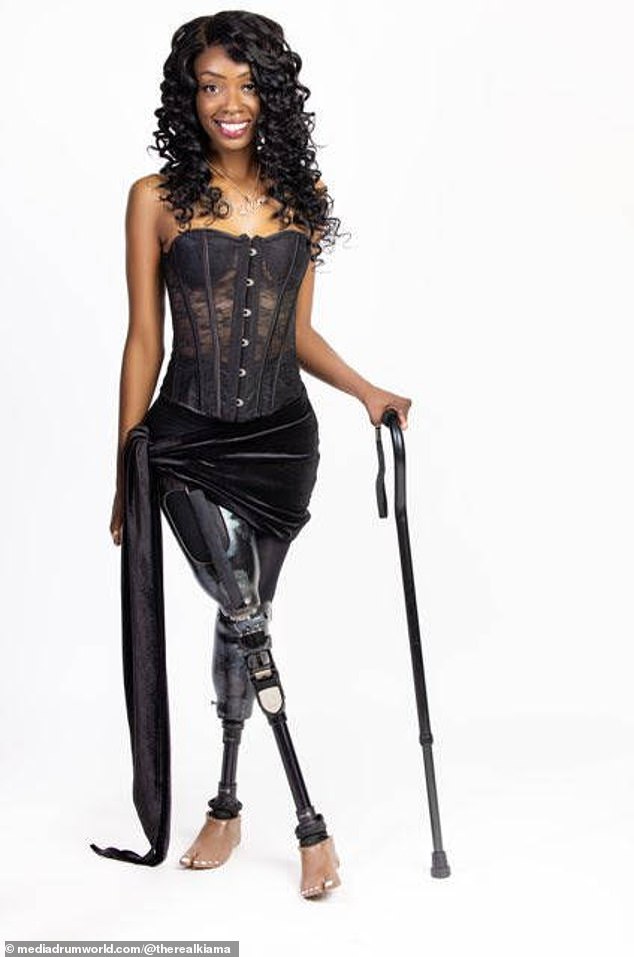 Moving fast: The 30-year-old took an ambulance to the hospital, where doctors amputated her left leg 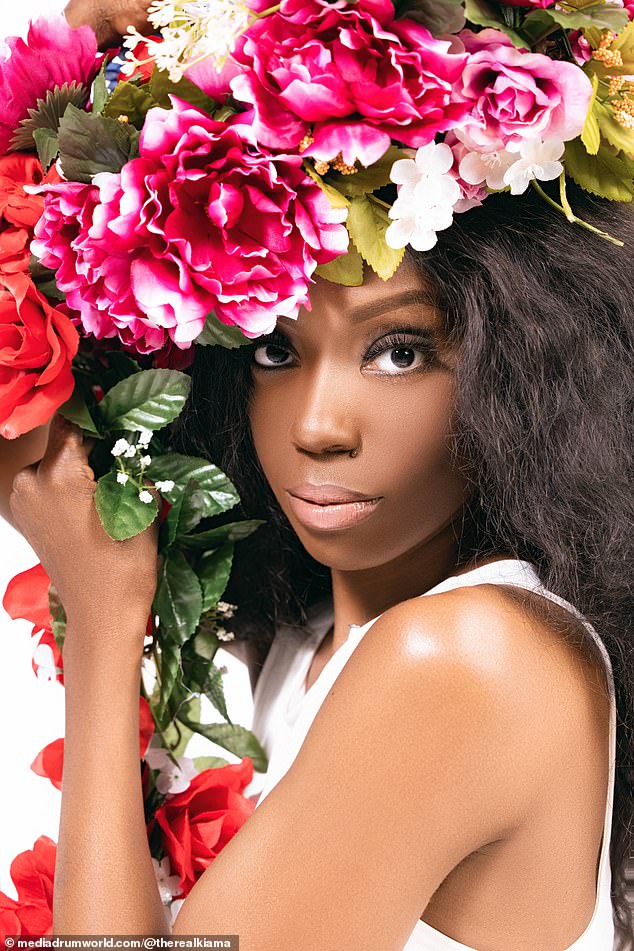 Kia woke up on February 11, 2019 with stabbing pains in her stomach she assumed were the result of her period, but as time went on and they wouldn’t abate, she had her sister call her an ambulance.

‘My body locked up completely as the stabbing pains continued,’ she said. ‘What I thought was menstrual cramps was actually sepsis taking over my body… I wasn’t aware I had gone septic until it was way too late. Everything happened so fast.

‘Once I got to the hospital, I was put in the waiting room until they couldn’t handle my screams,’ she recalled.

‘The paramedics had advised on arrival that my blood pressure was extremely low. My vitals were checked, and I was put in an emergency room.

‘I had CT scans, and the doctors discovered an infection in my stomach. It was urgent, so they took me into surgery,’ she said.

But she nearly didn’t make it into the OR.

‘While being prepped for surgery, my blood pressure continued to drop — and my heart stopped,’ she went on.

Sepsis, known as the ‘silent killer,’ strikes when an infection sparks a violent immune response in which the body attacks its own organs.

It is a potentially life-threatening condition, triggered by an infection or injury.

If caught early enough, it’s easily treated with intravenous antibiotics and fluids — but sepsis strikes quickly, and for every hour of delay, a patient’s chance of dying increases 8 per cent.

Early symptoms include fever, chills, shivering, a fast heartbeat, and rapid breathing — which can be confused with more mild conditions like flu or upset stomach, meaning it can be difficult to diagnose.

The six signs of something potentially deadly can be identified by the acronym ‘SEPSIS’:

A patient can rapidly deteriorate if sepsis is missed early on, so quick diagnosis and treatment is vital — yet this rarely happens.

Doctors still rushed her into surgery to amputate her left leg. While they were operating, she flatlined a total of three times, and was completely dead for eight minutes.

‘The hospital advised my family that there was nothing more they could do,’ she said.

But her family refused to accept this, and insisted that Kia must be taken to another hospital for life-saving treatment.

‘Once I arrived at the second hospital, the fight was down to me. I received some more amputations, but I fought,’ she said.

For two weeks, she survived in a medically-induced coma, ultimately waking up on her own.

She was in for a shock when she opened her eyes: Her left leg was gone, and her right leg was ‘completely dead.

‘My fingers were stuck — cold, hard and black,’ she said.

‘My family, friends, and most importantly, my children, were devastated — but they never lost hope and faith in God,’ she went on.

‘After seeing the condition sepsis had left my body in, I was determined to get the other dead limbs off to avoid another infection.’

Her right leg and several fingers were amputated. 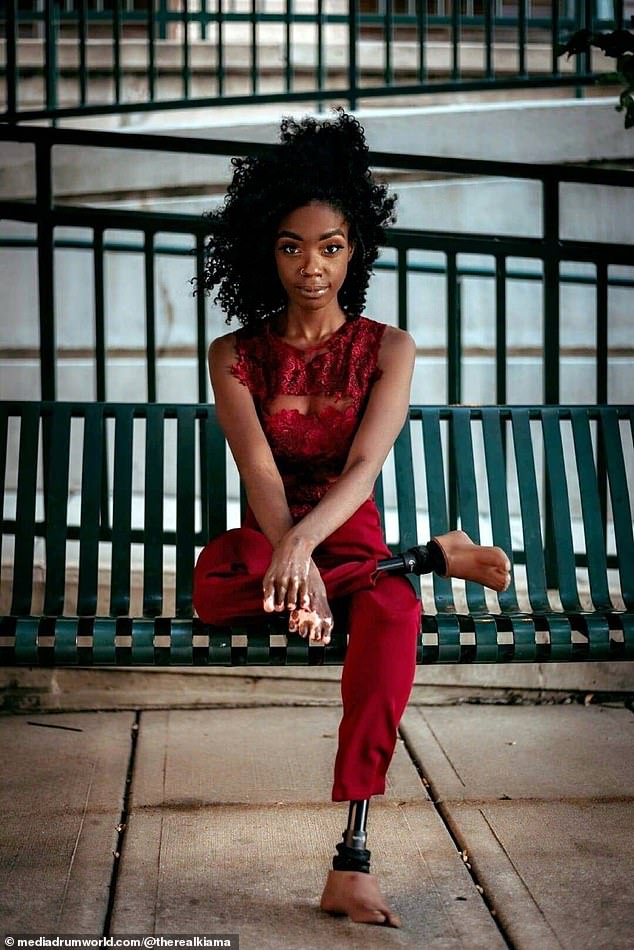 Looking up: She said that her faith got her through: ‘It was as if God needed to talk with me for a moment and then sent me back’ 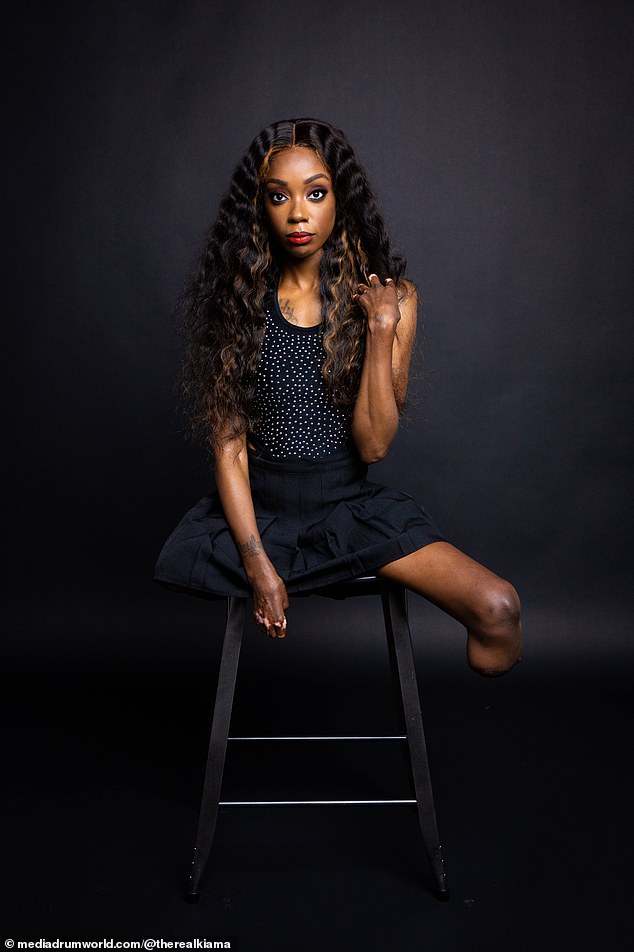 ‘I’ve always stood firm in my faith and always believed God watches over me. A lot of the things I experienced with sepsis didn’t affect me as badly as it could have,’ she said 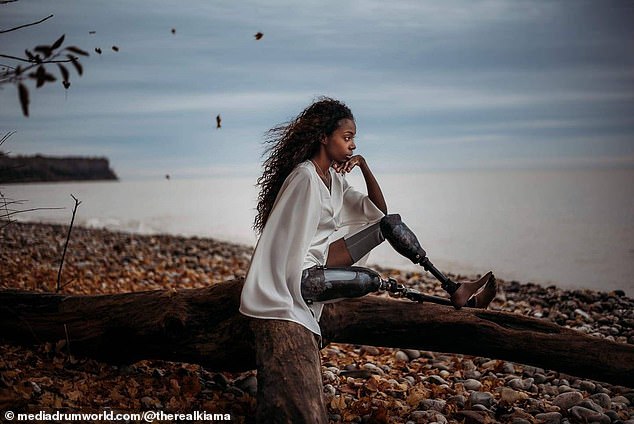 Looking to the future: After a year of hospital visits and physiotherapy, Kia’s life had started to get back on track

Kia is adamant that her faith is what helped her get through this ordeal. She believes that God brought her back from the brink of death, and now her faith is stronger than ever.

‘I’ve always stood firm in my faith and always believed God watches over me. A lot of the things I experienced with sepsis didn’t affect me as badly as it could have,’ she said.

‘The most pain I felt was when I was heading to the first hospital, and after that, it was like I didn’t feel anything else. It was as if God needed to talk with me for a moment and then sent me back,’ she continued.

After a year of hospital visits and physiotherapy, Kia’s life had started to get back on track.

‘I was given a completely new set of tools to use for the rest of my life. The most difficult part was learning how to use what I had left, and making sure I can still take care of my children the same way, she said.

She has now written a book about her spiritual experience titled Surviving Sepsis: A Survivor’s Tale, and has started a career as a model, aiming to increase body diversity in the industry. 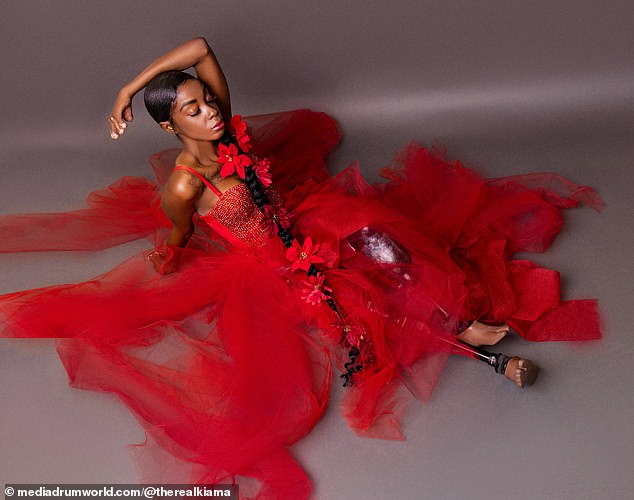 Confident: She has started a career as a model, aiming to increase body diversity in the industry 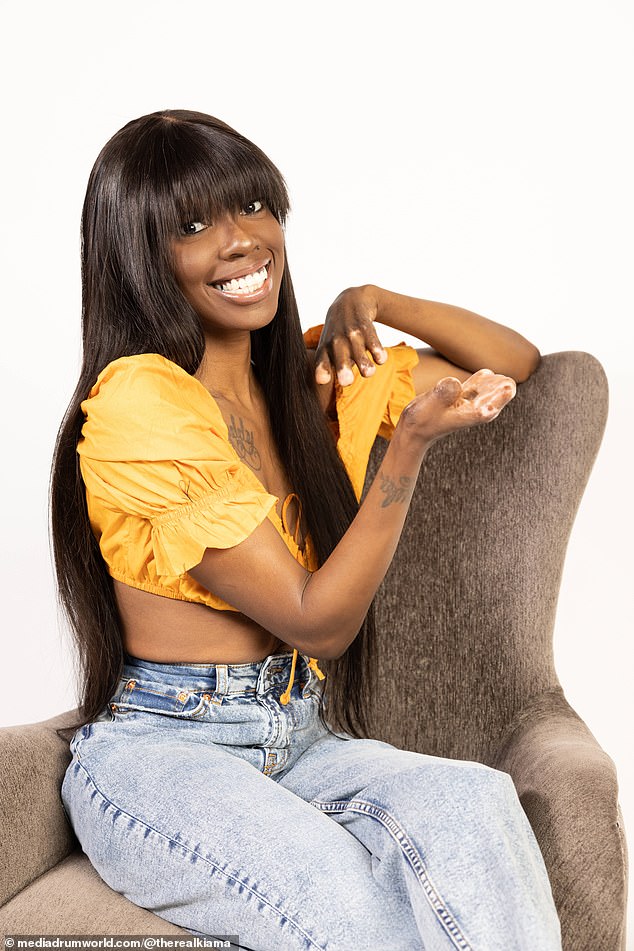 Telling her story: She has written a book about her spiritual experience titled Surviving Sepsis: A Survivor’s Tale 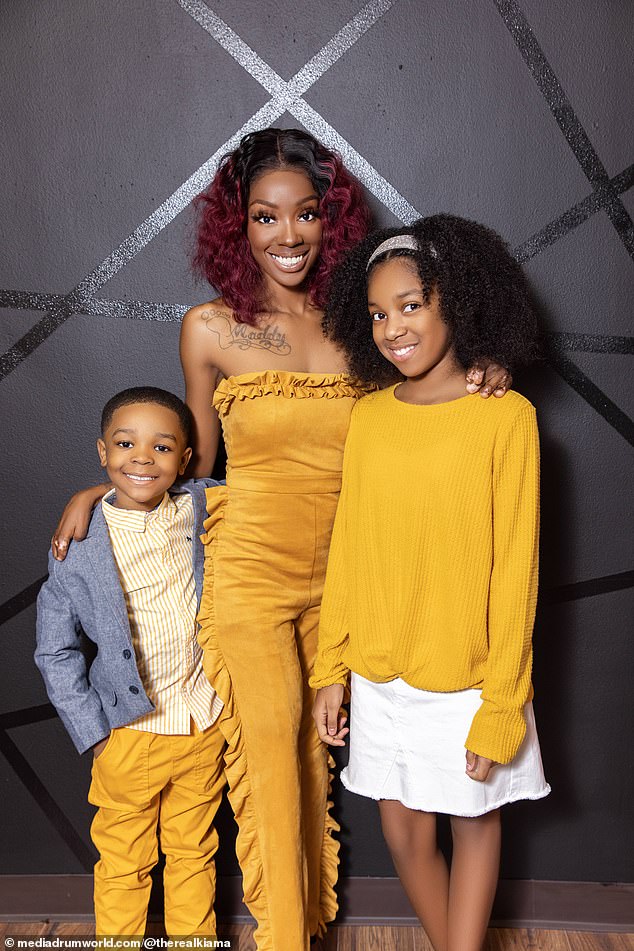 ‘We are all normal and beautiful. Not all supermodels have real legs — they come in metal as well,’ she said

‘My spiritual journey was so real that I ended up writing a book about it because I needed to make sense of what had happened,’ she said.

‘I then decided to model, because I wanted to show that people with limb differences are not “foreign.”

‘I am very confident in my body, soul and mind. After having my amputations, I’ve heard and seen all kinds of things — some good and some bad.

‘It doesn’t affect me, but there are so many people that look different and won’t leave their house because the world can be so mean.

‘I clearly do well under pressure, and I don’t care what people think of me. I love my body, like everyone should. So my goal with modelling is to open the door for the children with limb differences who are afraid that they can’t live a normal life.

‘I do it for the young girl that feels ugly because she doesn’t look “normal.” We are all normal and beautiful. Not all supermodels have real legs — they come in metal as well,’ she said.

What Will Happen To Kate Middleton And Prince William When The Queen Dies?
Entertainment