Home » Lifestyle » With Adele and Beyoncé as Frontrunners, Are the 2023 Grammys Headed Toward an Awkward Rerun of 2017? 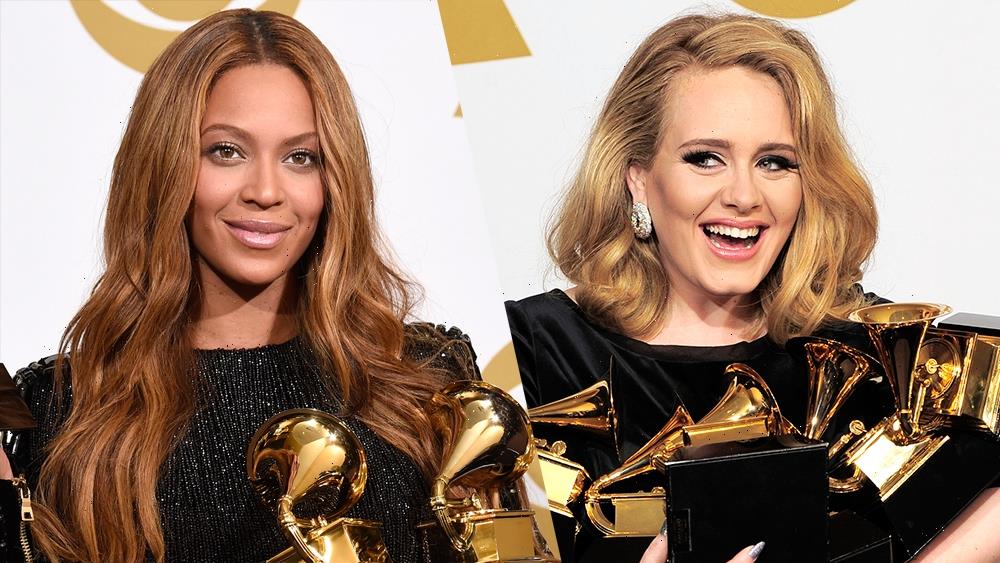 With Adele and Beyoncé as Frontrunners, Are the 2023 Grammys Headed Toward an Awkward Rerun of 2017?

Remember how aggrieved people got when Adele beat Beyoncé for album of the year at the Grammys in 2017? People, like for instance, Adele, who said that “the artist of my life is Beyoncé” and “the ‘Lemonade’ album was just so monumental… A piece of me died inside. I felt like it was her time to win. What the fuck does she have to do to win album of the year?”

The victor navigated the space between pride and embarrassment in the moment of her acceptance speeches and backstage press conferences as best she could. It’s not a position she’d likely be especially eager to find herself in again. Yet she well could, with the front-runners for the top 2023 Grammys essentially boiling down to… Beyoncé and Adele. And, yes, plenty of third-party candidates to be named at a later date. But for all practical intents and purposes, a little over five months out from the February 2023 telecast date, it is looking like déjà vu all over again, with a list of truly serious contenders for the top prize that runs the gamut from A to B.

Showdowns between friendly titans are supposed to be fun, and possibly even good for ratings at a time when awards shows need every bit of rooting interest they can get to reignite interest. But the prospect of an exact rematch of the 2017 contest probably spurs more dread than delight for those already thinking ahead to it. If Grammy chief Harvey Mason Jr. doesn’t already have a knot in the pit of his stomach, he probably should.

What compounds the intrigue is how, if you leave electoral and representational politics completely out of it, Beyoncé’s “Renaissance” and Adele’s “30” are pretty evenly matched albums, on a balance sheet. Both are superlative collections widely embraced by critics and mass audiences alike. Either would be a credit to the Recording Academy on a list of album of the year winners, unlike some of the meh efforts that have squeezed onto that scroll over the years. But both come into a contest with some handicaps that make it clear neither is anything close to an automatic shoo-in at this point.

If the 2017 competition were run again, it’s hard to not believe that the results would be reversed and “Lemonade” would be the victor. “25,” which took the album prize that year, stands as the least of Adele’s achievements — a collection that was clearly less personal for her than the ones before and since — while “Lemonade” was a culture-shaking, confessional blockbuster that holds up as Beyoncé’s best in the minds of many casual fans as well as diehards. That contrast only seems starker in hindsight, and with diversity efforts slowly changing the demographics of Academy membership, maybe the obvious pick would be made if a do-over could be done. Yet this is not the exact same race. “30” is better than “25,” and “Renaissance” is not the kind of obvious Grammy bait that “Lemonade” seemed to be.

In making a less overtly confessional album this time, it’s as if Beyoncé boldly said, “Fuck awards, let’s dance” — then made an album that’s implicitly personal and political anyway, without waving very many of its statements in your face. The challenge, if there is one, may be in getting traditionally minded Academy members who are inclined to reward more autobiographically inclined albums to recognize that Beyoncé is making a boatload of statements with “Renaissance,” but under the veneer of “releasing the wiggle” first, and wagging-the-dogma secondarily. (Not that the Academy is necessarily altogether disinclined toward a mere party album, as the 2018 triumph of Bruno Mars’ “24Kmagic” proved.)

One other thing possibly weighing against Beyoncé’s chances of finally taking the album of the year crown, besides the too-easy classification of “Renaissance” as a dance album, is that, as numbers go, it’s not a blockbuster remotely in the vicinity of Adele’s. It spent just one week at No. 1 before settling into more modest top 10 climes; the single “Break My Soul” broke through to No. 1 on the Hot 100 after a tentative start, but the two weeks it spent on top felt fleeting coming in the wake of months-long monsters like Adele’s “Easy on Me” and Harry Styles’ “As It Was.” Commercial fates aren’t supposed to figure in, but subliminally, among some of the establishment voters who still tip the scales on these things, its more tempered commercial performance may factor into a feeling that maybe this just isn’t Beyoncé’s year … again.

It’s easy to imagine an “If not now, when?” feeling becoming more prevalent, though. Beyoncé is the farthest thing from a true Susan Lucci case, overall; famously, she has already become the most awarded singer in Grammy history. (Including non-performers, she’s tied with Quincy Jones and trails only the late conductor Georg Solti.) But the Lucci tag feels apropos anyway in the public mind because of her by-now legendary shutout in the top three categories — album, record and song; that’ll remain a thorn in the Grammys’ side until the Academy votership finds a way to collectively pluck it out. It’s not a lifetime achievement award, so having her win album will require real enthusiasm for the project and not just a let’s-get-this-over-with consensus, when there’s such strong competition, and not even just from Adele. But there’s a strong argument to be made that Beyoncé could or should win in part because she took a left turn and didn’t deliver the kind of obvious four-quadrant album the Grammys love, not in spite of that.

Adele did deliver a wholly demographics-crossing record, in her favor. If she has anything going against her, besides being seen as standing in Beyoncé’s way, it could be the less-than-universal understanding — OK, backlash — with which her decision to postpone her Vegas residency was greeted, and the lack of followup smashes from “30” after “Easy on Me.” (That lack of subsequent Hot 100 dominance may have been affected by the residency situation; she said in a new interview that she put the kabosh on a completed music video in the midst of the Vegas controversy.) Then again, the long-forestalled Vegas gigs begin Nov. 18… three days after the Grammy nominations are announced. If her engagement there is received rapturously, that’ll put a lot of wind back in her Grammy sails.

Beyoncé’s standing could change by the time final-round voting is in full swing, too. Although there are no signs of a tour, a second single from “Renaissance” could buoy perception of the album’s impact among the general populace. And she’s announced that this album is the first of three acts. There’s still considerable mystery outside her inner circle as to what that means, but there are rumors the second “act” will amount to an entirely separate album before Christmas, and, more importantly, before Grammy final-round voting closes on Jan. 3, 2023. If that proves true and the companion piece is a critical hit, too, Academy members could be influenced by the collective weight of both albums, even though only one is on the ballot.

Of course, t’s not just Beyoncé herself who’s been Lucci-ed for album of the year, though — it’s Black women generally. The Academy has hardly been shy about awarding people of color in the category, but historically it’s been almost exclusively men. Since the category was instituted in the late ‘50s, only three times have Black women won album of the year, and all three instances came in the ‘90s, with Natalie Cole, Whitney Houston and, finally, Lauryn Hill with her breakout album at the end of the millennium. Even for voters who believe the award should always be about the individual work and not handicapped in favor of representation, in a situation where most other weighing factors are about equal, addressing a historical lapse might feel like a fair tipping point.

VIP+ Analysis: Awards Ratings Are Up. But Are They Really?

There’s always the chance of a “neither” option, although it’s hard to imagine which contender could topple both divas for album of the year. Silk Sonic is eligible in the album category this time after winning record of the year last time, so that may provide the best chance of a spoiler. And that hunch has its basis in history: Some feel that Silk Sonic frontman Bruno Mars’ aforementioned “24kmagic” benefitted a few years ago because Jay-Z and Kendrick Lamar split the vote. But would Grammy voters really want to celebrate a fun but fairly weightless pastiche over great albums by two of the most important artistic figures — and women — in 21st century music? (We’re afraid to offer a definite “no” on that.)

Others who seem like near-locks to get an album nomination in the now-expanded field of 10, besides Silk Sonic: Harry Styles, Brandi Carlile, Kendrick Lamar and Bad Bunny. That would leave three slots to fill, with the additional choices to fill those including Lizzo, Ed Sheeran, Rosalia, the “Encanto” soundtrack, Future, Coldplay and past winners Robert Plant & Alison Krauss. (That’s assuming the boycott-inclined Drake and the Weeknd decline to submit themselves again.)

No one should cast their ballot purely because of Grammy-night optics. And in a perfect world, anyone who wins should be able to hold her head high. But practically speaking, anticipating a certain queasy feeling may be unavoidable. As much as everyone wants to hear Adele sing on the Grammys, no one wants to hear her apologize again.

I’m a mom – I’m shamed for letting my three-year-old cuss & giving him unlimited screentime, but I don’t care | The Sun
Entertainment