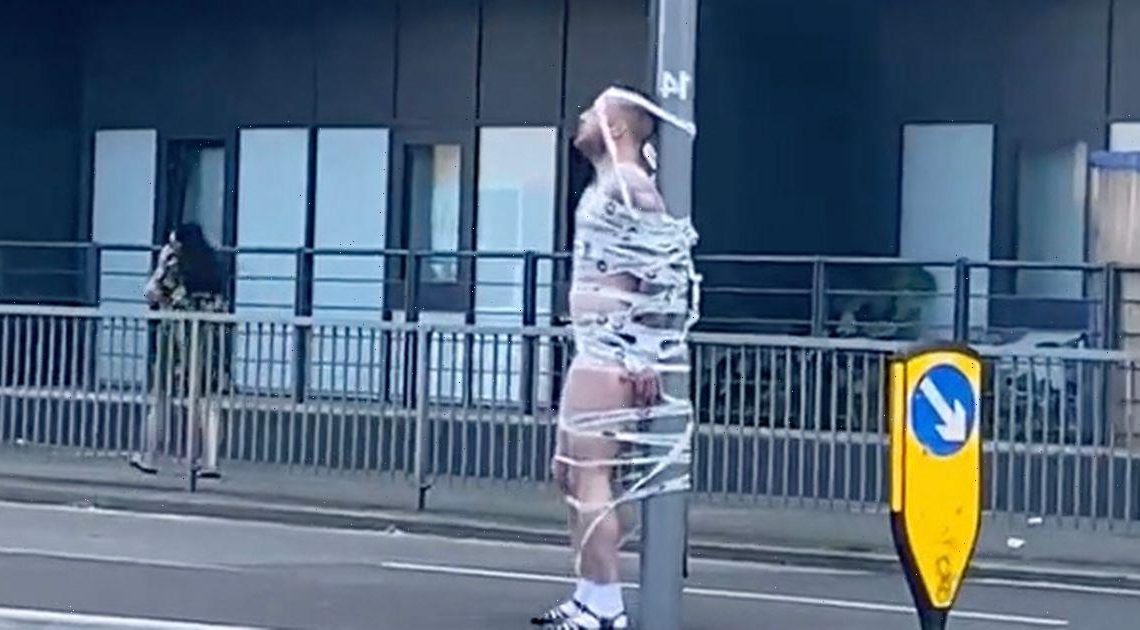 A groom was stripped down to his underwear and taped to a traffic light pole in a bizarre stag do prank.

Jack Wilkins, from Basildon, Essex, became an internet sensation after his best man posted a video of the prank on social media.

In a clip uploaded by his mate Aaron on Thursday, the husband-to-be has his hands and feet tied.

He was spotted outside a shopping centre close to the Beehive pub.

The stag is seen wearing nothing but his black boxers, a pair of white socks and grandad sandals in a rather uncomfortable pose.

With the plastic tape wrapped around his body, he turns and faces towards the crossing as a man talks to him from across the road. A taxi driver honks at Jack as they drive past in front of him.

Viewers were left in stitches and commented in Aaron's post, as many replied with laugh-cry emojis.

"He's had a nightmare," one wrote and a second added: "This man is a legend."

A third chimed in: "He cheered me up."

Aaron and his friends took the prank to the next level by launching a petition to make Jack the perfect candidate to "turn on the town's Christmas lights" this year.

The post on change.org wrote: "The stag party for Jack Wilkins in Basildon soon become the talk of the town when a failed nipple piercing attempt ended up with him being carried across the road and taped to the traffic lights outside the Beehive pub in nothing but suspenders, thong, sandals and socks.

"This act bought tears to shoppers, sounds of horns from passing vehicles and of course prides of joy to successful stag group.

"Shares of photos and videos still swamping social media it would only seem right that 'Socks and Sandals Boy' would be the only clear candidate to turn on Basildon Christmas lights this year wearing his famous attire one more time.

For more stories from the Daily Star, make sure you sign up to one of our newsletters here .