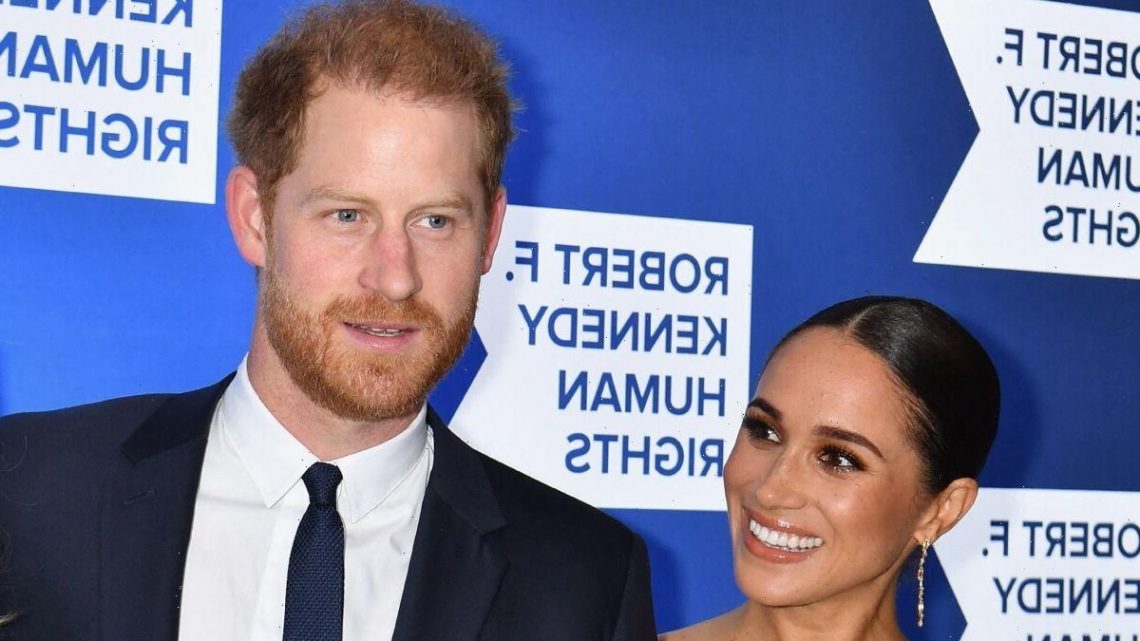 Prince Harry is ‘keen to get away from heckling’ claims expert

Meghan Markle, 41, and Prince Harry, 38, received an award at the Ripple of Hope Awards in New York on Tuesday evening. The Duke and Duchess of Sussex got a mixed reception upon entering the venue.

When entering the building in New York City, a heckler could be heard shouting: “Meghan! What do you think about destroying the Royal Family?”

Meghan ignored the protester and continued from the car straight inside the building, however, Harry appeared to close his umbrella right in front of the press cameras to avoid any more footage being recorded.

Later on, inside the venue, the Duke and Duchess were asked a few questions about their upcoming Netflix documentary which airs on December 8, which they both declined to answer.

For instance, one question was: “Harry, do you have a message for your family?” Another was: “Are you harming your family, Harry?”

One reporter asked the Prince: “Harry, are you putting money before family?”, to which he seemingly responded: “No more questions” as he giggled slightly and raised his hand to the microphone.

She claimed: “This was a keynote event at a crucial time for this couple and they looked determined to ignore the hecklers who would have been seriously off-message for this event.

“This was much in the same way as Harry’s father Charles had looked determined to ignore the eggs that have been thrown at him recently.”

According to the expert, the Duke and Duchess of Sussex were in top form on Tuesday evening.

She explained: “Meghan and Harry both appeared to be having the time of their lives as a high-powered and presumably influential A-list couple keen to promote ‘their truth’ to the US audience.

“With a Netflix show to plug, Harry looked unusually enthusiastic about posing for photos.” However, Judi argues that one gesture may have let his mask slip slightly.

She suggested: “There was only one micro-gesture that might have implied he was keen to get away from the heckling.

READ MORE: Kate and William use ‘code names’ when travelling

“As he stood in a line to pose his chin suddenly rose up in a small upward nod.

“Back in his royal days, this would have signalled an end to the posing when he’d had enough and wanted to move away.”

The Duchess of Sussex looked fabulous in a bespoke Nicolas Ghesquiere white gown from Louis Vuitton.

It was a beautiful midi white dress with an off-the-shoulder boat-neck cut.

She wore black pumps from the same brand for her footwear. Meghan could also be seen carrying her Givenchy black satin clutch bag for the evening.

To add some glamour, the royal wore Carolina Herrera’s “Kaleidoscopic Gold Plated Drop earrings Embellished with Crystals” which looked incredible on the Duchess.

Finally, she could be seen wearing the Aquamarine ring which she also wore on her wedding day.

The ring is believed to be an heirloom from the late Princess Diana, which Harry gifted to her after they tied the knot back in 2018.