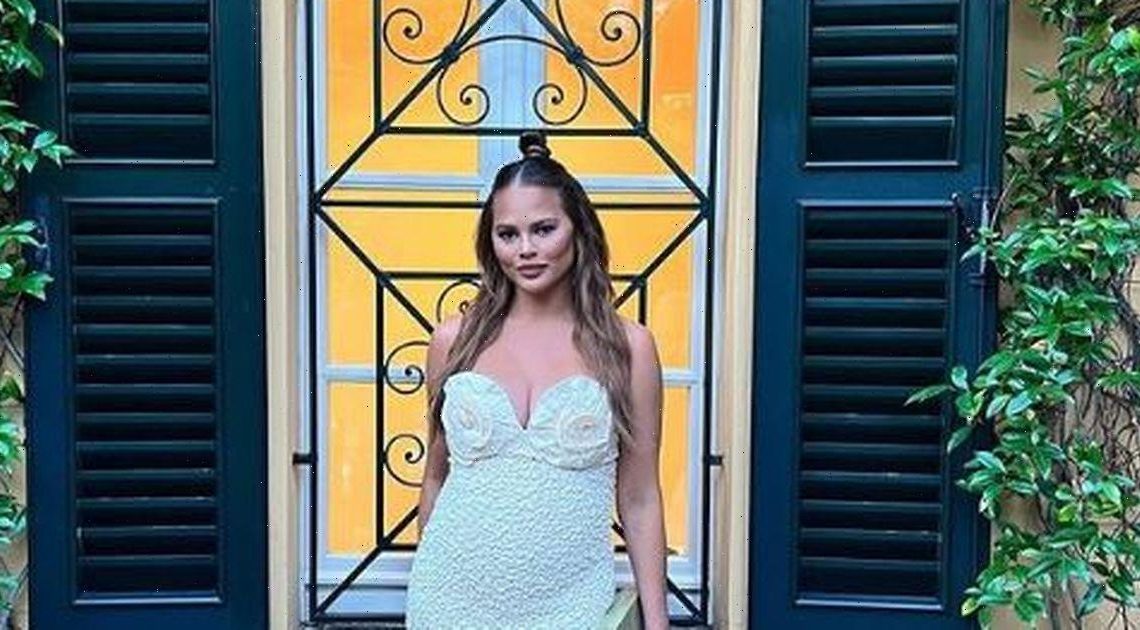 And as the family gears up to welcome their little one into the fold, they’vebeen enjoying a trip to Italywhere Chrissy, 36, has been showing off her blossoming baby bump.

Chrissy and John, 43, are already parents to Luna, six, and four year old Miles and the pregnancy comes two years after the tragic loss of their stillborn son Jack.

The family appear to be in high spirits as they continue their getaway and Chrissy has been keeping her 39 million Instagram followers in the loop as the holidaying continues.

They have been dressed up to the nines and in one picture Chrissy sported a white strapless gown with flower detailing that hugged her growing bump.

As her body changes, she snapped a mirror picture in a plunging dress and added a typically humorous caption as she told fans: “will name my baby with the letter my boobs stop growing at. looking like a g, maybe h.”

Chrissy showed off her boho chic look in a white sundress with cutout detailing at the stomach as she braided parts of her hair.

John sported a black and white ensemble with a printed shirt and patterned shorts as he and his wife smiled for the camera.

The family of four managed to capture a selfie together and Chrissy noted how much of an event it was: “EVERYONE IS LOOKING!!!!!!! this is a big deal.”

In a particularly glamorous outing, Chrissy dressed up in a pink minidress with halterneck detail which she paired with sky high stilettos.

John sported a pale suit for the occasion while Luna wore a ruffle dress and Miles looked adorable in a shirt and shorts.

Chrissy announced she was expecting her third child with a poignant Instagram post. She wrote at the time: “"The last few years have been a blur of emotions to say the least, but joy has filled our home and hearts again. 1 billion shots later (in the leg lately, as u can see!) we have another on the way."

She went on: "Every appointment I’ve said to myself, “ok if it’s healthy today I’ll announce” but then I breathe a sigh of relief to hear a heartbeat and decide I’m just too nervous still".

"I don’t think I’ll ever walk out of an appointment with more excitement than nerves but so far, everything is perfect and beautiful and I’m feeling hopeful and amazing. Ok phew it’s been very hard keeping this in for so long!"

This Holiday Cookbook With More Than 50 Recipes, Gives A Royal Insider Look at How to Create Easy Family Meals