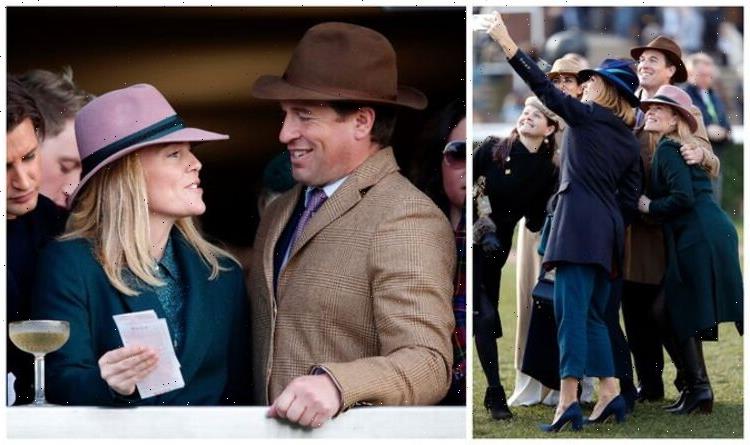 Peter Phillips, 44, was previously married to Autumn Kelly, 43, from 2008 to 2021 when they officially divorced. In 2003 the couple met at the Formula 1 Canadian Grand Prix in Montreal. Their engagement was announced on July 28, 2007.

On February 11, 2020, the couple confirmed they had separated in 2019 and announced they were planning to divorce.

However, Peter and Autumn were pictured at Cheltenham Racecourse on March 13, 2020, a couple of months after they had officially separated, looking happier than ever.

Judi James, a body language expert, spoke exclusively to Express.co.uk to explain whether or not their happy poses were authentic.

She said: “Of course it is common for high-profile couples to claim their divorce is ‘amicable’ and that they remain ‘good friends’ and clearly when there are children involved, as they are with Peter and his ex-wife Autumn’s split, there are compelling emotional reasons to retain a sense of mutual respect and a lack of bitterness.

“But Princess Anne’s son and his ex-wife do seem to have nailed the body language rituals of friendship and even ongoing affection following their split.

“There is clearly something of a PR message or even stunt about these poses as they do seem to be performed directly and consciously to the camera.

“But, having said that, they are well-defined enough to make anyone wonder why they even split up in the first place,” the expert claimed.

Were Peter and Autumn’s poses for the cameras “over-performed”?

“Peter and Autumn’s smiles do look a little over-performed here considering they had only recently split, but their eye expressions and their spatial behaviours are making them look relaxed and even happy in one another’s company.

“Peter, in particular, seems to use some close-up and very fond-looking eye-gazing that signals flattering attention when Autumn speaks.

“He seems very keen to tune into her and to track her thoughts and emotions and her behaviour suggests she is comfortable with that level of attention.

“The way she dangles her glass over the balcony makes her look genuinely relaxed here and all the mutual grinning and the exclusive eye-attention makes it almost look as though they are flirting with each other,” Judi noted.

Were there any signs of “bitterness” between the newly broken-up couple?

The expert added: “If there were any residual bitterness or in-fighting you would expect to see less eye contact and a subtle hardening rather than a softening of the eye expression when they look at one another, as this couple have here.

“Peter in particular still looks pretty besotted with his ex-wife.

“These look like mutual signals, suggesting this could be that rare thing, an amicable split, with the co-parenting taking place without a struggle, too.

“Peter did have a strong role model, though.

“His own parents also seem to have managed an amicable divorce, often looking totally delighted and the best of friends when they are now seen to meet up in public.”