Home » Lifestyle » Paid Vacation In The U.S. Is Embarrassing. Just Look At This Chart. Paid Vacation In The U.S. Is Embarrassing. Just Look At This Chart.

America: the land of the free and the vacation-deprived.

A recent study by D.C.-based think tank Center for Economic and Policy Research found that out of the 21 richest countries in the world, the U.S. “continues to be the only advanced economy that does not guarantee its workers paid vacation.” The report added that “without a federal paid vacation policy, close to one in four Americans have no paid vacation… [and] no paid holidays.”

It also revealed a massive gap between full-time and part-time workers, that while 90 percent of full-timers got paid vacation and paid holidays, less than half of part-timers received the same benefits.

This chart from Deutsche Bank hammers home the point: 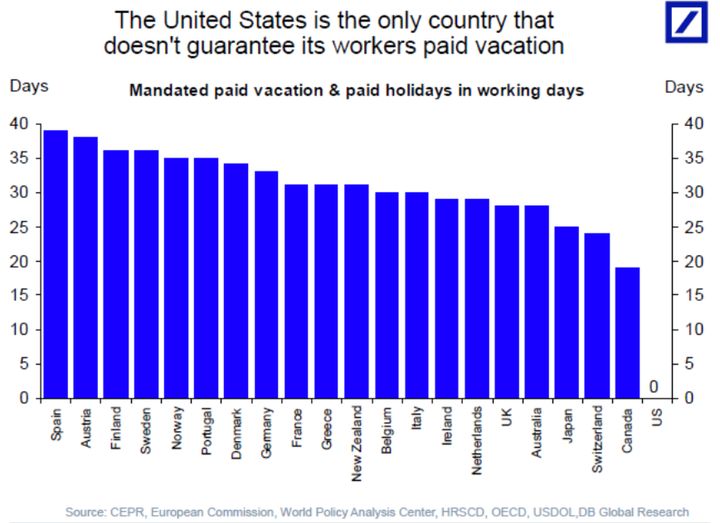 The key reason why the U.S. lags so far behind is because it is the “only advanced economy that does not mandate any paid vacation time for workers,” the study explained.

The U.S. is also one of the only countries that did not require employers to offer paid annual leave.

So while “most developed countries offer at least six paid holidays a year… the United States provides none,” the report stated.

And even if employees are getting paid days off, the average private sector worker is only likely to see about 10 paid vacation days and 6 paid holidays — which is “far less than in almost every advanced economy except Japan.”

In contrast, thanks to the European Union’s rules, European countries had at least four weeks or 20 working days of paid vacation for all workers who are employed in EU member countries.

Spain ranked as the most generous, offering workers 14 paid holidays, followed by Austria, Germany, Portugal and others.

The study also found a big gap between full-time and part-time employees and how they were granted time off.

“For U.S. employees who do receive paid vacation and holidays, the distribution of those benefits is extremely unequal,” the report found.

Even within the U.S., there are several states that are far more generous than others.

In a separate study by U.S. Travel in 2018, Colorado offered the most amount of vacation days to employees within the state, at 20.3.

Virginia was close behind with 18.9 days, followed by Arizona at 18.8 days.

At the far end of the rankings, Montana offered the lowest number of vacation days at 16.3, followed by Delaware and Rhode Island, both at 16.5.

The national average was 17.2 days.

Doughnut Or Donut? The Great Spelling Debate Of Our Time
Entertainment