Home » Food & Drink » Doughnut Or Donut? The Great Spelling Debate Of Our Time Doughnut Or Donut? The Great Spelling Debate Of Our Time

Doughnuts have become an integral part of American culture, loved for providing us with mouths full of comfort and loathed for ruining our diets. Beyond this love/hate relationship is another duality we apparently feel very passionately about: The correct spelling. Is it doughnut or donut?

Doughnut is the old-school, original term, but donut is picking up steam and is more popular in our ever-expanding online world. So is there a right way to spell our favorite ringed food of all time? Let’s settle this.

It’s difficult to pin down the exact date of the doughnut’s inception, but it’s quite clear that the first printed mention of the fried treat referred to it as “dough-nut,” spelled out to its full glory (and with an added hyphen). In 1809, Washington Irving wrote lovingly of the foodstuff in “A History of New York, from the Beginning of the World to the End of the Dutch Dynasty:”

“Sometimes the table was graced with immense apple-pies, or saucers full of preserved peaches and pears; but it was always sure to boast of an enormous dish of balls of sweetened dough, fried in hog’s fat, and called dough-nuts, or oly koeks: a delicious kind of cake, at present scarce known in this city, excepting in genuine Dutch families.”

(Oly koeks translates to “oily cakes,” a far less appetizing name than doughnuts. Just imagine — if they were still called “oily cakes” today, do you think we’d have two food holidays named after them? Would Homer Simpson have ever uttered the phrase, “Mmmmm, oily cakes?” But we digress.)

At some point — a very low point in our history, if you ask some — the term “donut” came into being. According to Merriam-Webster, “donut” has appeared in published, edited text since the mid-20th century, and it may have gained momentum thanks to phonetic-based spelling reform, of which Benjamin Franklin and Noah Webster were fond. That tradition turned words like catalogue into catalog, through into thru, and … doughnut into donut.

But the real culprit is likely Dunkin’ Donuts, which launched — you guessed it — smack in the middle of the 20th century, aka 1950. The following graph from Google Books Ngram shows data from 1900 to 2008, comparing the number of references from published literature for the terms doughnut and donut. Though it shows that doughnut has always been favored in the world of publishing, it’s important to note the donut spike right after 1950 … 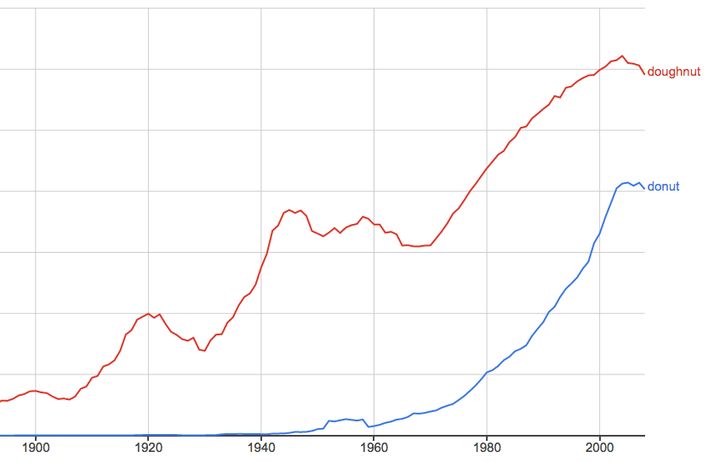 While the graph above shows doughnut is the favored term in the publishing world (and it’s also the preferred term among grammar nuts on the site Grammarly), the opposite is true on the internet. A comparison of the performance of doughnut vs. donut between 2004-2016 via Google Trends yields donut as the clear winner. (Thus proving the internet doesn’t give two hoots about formal grammar.)

Another dictionary officially favors doughnut as well. A search for the term “donut” on Merriam-Webster suggests that donut is only a variant of doughnut. Three points for doughnut.

So which spelling is correct? Both. Doughnut is preferred by style guides and dictionaries, but donut has become an acceptable substitute in our lexicon.

Here at HuffPost, we’ve been waging an inner battle for years, at times fluctuating (15 Donut Holes That Are Better Than Actual Donuts, vs. The Greatest Homemade Doughnut Recipes You’ll Ever Find). Because donut is the higher-searched-for term (and we naturally want to win the internet), we’ve often been tempted to go with “donut.” But our hearts are telling us to go with “doughnut,” and here’s why.

Doughnuts deserve every letter they can get. They have, after all, fried in hot vats of oil for us. When we take the “ugh” out of doughnuts, we’re extracting the three letters that embody the feeling of disappointed doughnuts all around the world: Ugh. 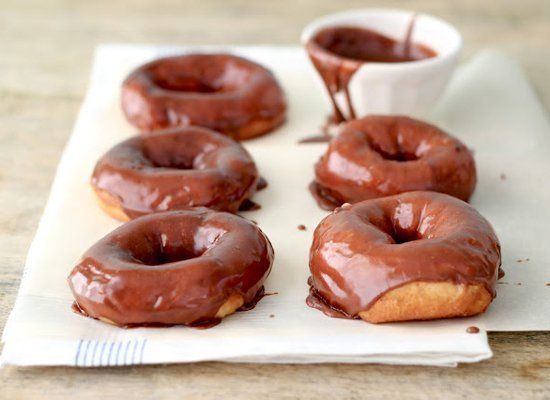 Paid Vacation In The U.S. Is Embarrassing. Just Look At This Chart.