Mother reveals heartbreaking moment she was given another woman’s baby

A mother has revealed the devastating moment she discovered her daughter, 51, had been swapped with another baby, and that the woman she raised was not her biological daughter.

Yet when she returned to pick up her daughter six weeks later, Helen now realises she was given a different child. It is unclear if this was intentional.

After considerable publicity about the illegal adoption scandal in Ireland last year, she took a DNA test with her daughter Christine Skipsey, 51, and the pair discovered they were not biologically related.

It’s believed her biological daughter was adopted by another couple living in Dublin, and Helen hopes to meet her in the near future.

She told the Irish Independent she had been left ‘devastated’ by the revelation, saying: ‘I am going to apologise to her and tell her it wasn’t my fault, that I was told when I collected my daughter that she was my daughter and that was it.’

‘You’re brought up with your religion, and I believed them. And I just feel sorry for the girl as well and I am going to apologise to her, I’ve apologised to Christine.’

‘Christine’s life has been turned upside down. It is something I have got to live with now for the rest of my life.’ 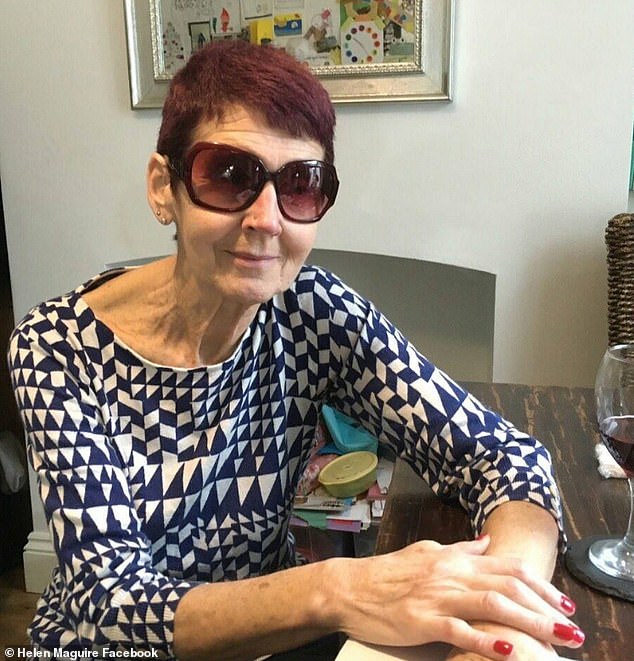 Helen said she wishes to apoligise to the child she’s never met, and revealed she felt sorry for her lost daughter

In 1966, an 18-year-old Helen Carew, left her family home in Co Tipperary and moved away to work in the Avenue Hotel in Dún Laoghaire.

Having grown up in a staunchly Catholic environment, she said she was desperately lonely, and ended up getting pregnant.

Upon telling the father, he encouraged her to meet a priest, and to move into a mother and baby home, where Helen was scared the pair would be seperated.

She was terrified that if her family discovered her pregnancy, her father would force her to give the baby up for adoption.

Instead of going home, she ended up sailing to England and picking up work in a pub in Kent.

There, she became close to a priest Father Cleary, who was chaplain to the Irish community in Kilburn and Camden.

He went on to help her get work as a telephonist at the President Hotel on Russell Square, and Helen slowly came to trust him.

She gave birth to a daughter at the Royal Free Hospital in Hampstead on November 25, 1966 and named the child Christine. 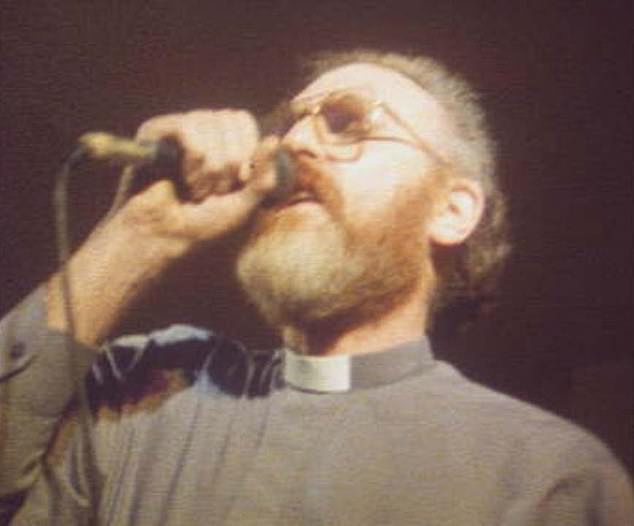 Helen revealed Father Michael Cleary encouraged her to leave the baby with the nuns at Temple Hill, St Patrick’s Guild, where the mix up would later happen. The priest was a charismatic figure who regularly appeared on television, and was a newspaper columnist and radio presenter

But shortly after the birth, she wanted to go go home to visit her family and needed somewhere to leave the baby while she did so.

According to Helen, Fr Clearly suggested she leave the child at St Patrick’s Guild, which was run by the Religious Sisters of Charity.

In order for the nuns to look after her baby, Helen had to initially go along with the idea the child would be given up for adoption. 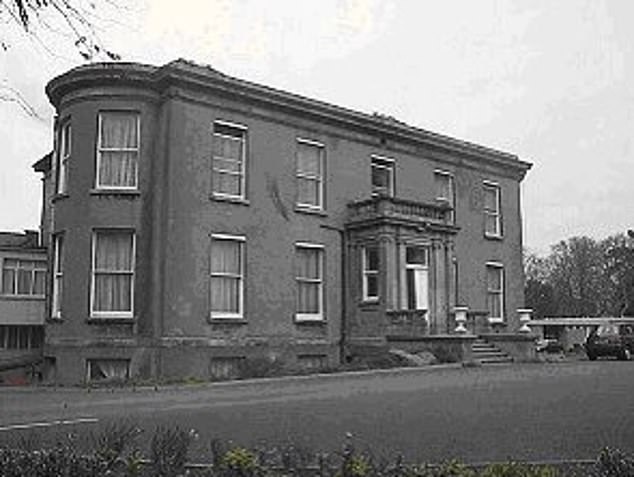 St. Patrick’s Infant Hospital, Temple Hill, where Helen was encouraged to leave her baby for a short time while she visited her parents

When she arrived in Ireland, she says she was met by a woman known to Father Cleary, who drove her to St Patrick’s.

Her baby was admitted to the nunnery on December 3, 1966, with Helen making an initial payment of £21.

The intake form included a handwritten note that explained Helen intended to keep the baby.

On returning to her family home, she did confide in her mother Joan about the birth, and they went to visit the child in Dublin a week later. 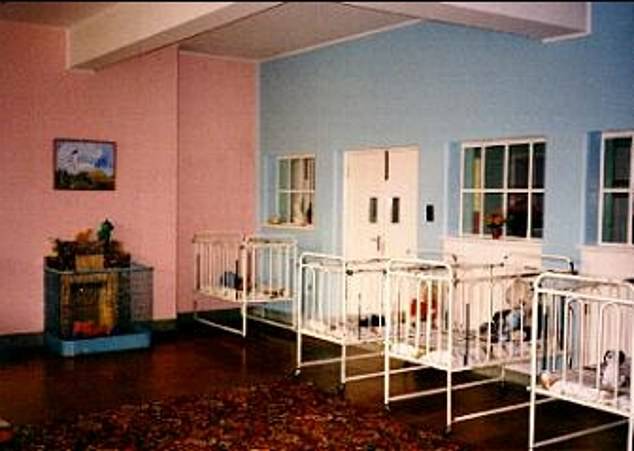 Pictured: a nursery at Temple Hill. Helen said she left her daughter in the care of the nuns for six weeks before returning, and now believes she was handed a different baby on her visit

Upon this visit, she was presented with adoption papers that she refused to sign. She claims the nuns became ‘quite horrible’ when it became evident her daughter was not up for adoption.

After the visit, Helen returned to London alone, in order to settle her affairs and find somewhere to live with her daughter.

She continued to send money back to St Patrick’s every week for Christine’s care, until January 19, when she went to collect her.

Upon being presented with the baby, Helen says she immediately knew something wasn’t right.

Father Cleary became a confidante of Helen’s as she lived in London. It was later discovered that the chaplain fathered children with unmarried women in the city

She recalled: ‘I went in and they brought me over to this basket and I said to them: “That’s not Christine”. But they said it was.’

She noted that Christine had been born with dark, black hair, while the baby they were claiming was her daughter had blonde hair.

She explained: ‘They told me all babies are born with black hair. So like an idiot, I believed them. I never thought about it. Back then you believed what the priests and nuns said to you.’

Helen took the baby and returned to London, marrying a co-worker later that year. The couple went on to have two boys and a girl.

Past scandal of St Patrick’s Guild

The Irish Government announced in May 2018 that 126 people adopted through the former St Patrick’s Guild adoption society between 1946 and 1969 had incorrect details on their birth certificates.

Rather than the name of the birth mother written on the birth certificate, it saw the names of adoptive parents listed instead.

The falsely recorded adoptions identified were amongst 13,500 arranged between 1946 and 1969 arranged by the society, which was run by the Sisters of Charity.

At the time, smaller organisations involved in adoptions had little supervision or guideline from the government.

There are few sisters alive to reveal what happened in the adoption societies.

Tressa gave birth to Patrick a clinic in Dublin on 13 March 1961.

Patrick Ferrell had no idea he was adopted until his mother died in 2012.

His birth certificate listed his adoptive parents as his birth parents.

Tressa spent years searching for her son, but says she was given the brush off by St Patrick’s Guild.

Some suspect the scandal to be a lot larger than the initial 126 cases discovered.

At the time the chief executive of Children’s charity Barnados said: ‘I suspect every single adoption agency in the country is involved, that’s 150,000 babies, it would be amazing if at least ten per cent of them were not illegal.’

When the marriage ended, Helen remarried and moved back to Ireland with her second husband, David.

It wasn’t until last July when the illegal adoption scandal in Ireland hit the news, that she and her daughter Christine joked about taking a DNA test.

But they ended up ordering one online, and were shocked when the results came back with 99 per cent certainty that Helen was not Christine’s mother.

Helen was devastated by the results, she said: ‘We just couldn’t believe it. A child in my life…I’m always thinking about her now, and Christine and how Christine feels.

Pictured: John Baptist Church, where most babies from Temple Hill were baptised before being adopted

Meanwhile Christine said:’ I felt very lonely. I honestly never thought it would come back like that.’

They felt there was only one possible explanation – that Helen had been given the wrong baby by the nuns who ran St Patrick’s when she went to collect her daughter.

Since their discovery, the pair have been left desperately scrambling for information- Christine, desperate to find her birth family, and Helen, trying to locate her biological daughter.

Since then, Christine has received information indicating where she was born and her real date of birth.

Meanwhile,  Tulsa have also been able to identify a woman who they believe to be Helen’s birth daughter. Apparently admitted to St Patrick’s on the same day as Christine, she went on to be adopted by a couple living in Dublin.

There are now calls for the Catholic adoptions files to be reopened following the scandal.

Yes, You Can Ooze Sexiness In A Matter Of Seconds—Here's How
Entertainment