One of the ministers who oversaw a program that funnelled an extra $100 million of public money into National Party seats ahead of more deserving electorates has rejected accusations of pork-barrelling, saying regional people were only getting their fair share.

Former deputy prime minister and Nationals leader Michael McCormack on Friday said he and fellow ministers had followed a merit-based approach to allocating money under the $1.15 billion Building Better Regions Fund. But he noted there was a “subjective” element to the program to ensure it was not just handed out on the advice of “pointy-shoed and faceless bureaucrats”. 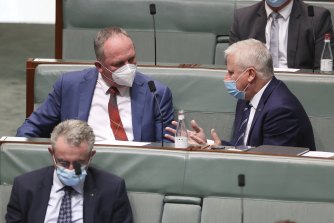 An audit report of the fund found almost two-thirds of it went to projects that did not have the most merit. National-held seats received $104 million more than they should have if the money were handed out fairly, it said.

National-held seats accounted for 24 per cent of all applicable electorates but received both a higher number and larger value of grants than both Liberal-held and Labor-held seats.

Money was allocated to pickleball courts, a speedway track and beach boardwalk upgrades by a panel of ministers that was headed by McCormack and fellow former Nationals leader Barnaby Joyce.

McCormack, who oversaw grants that were awarded shortly before the 2019 election, said regional seats “probably” produced more tax receipts than urban electorates including the inner-Sydney seat of Wentworth.

He rejected the audit’s findings that National Party seats had received extra support, saying all decisions had been done on merit.

“Why shouldn’t people who live in National Party seats get their fair share?” he said.

“I’m quite proud of what I did. As a minister, I stand by the decisions I took. They were merit-based but they were according to the guidelines.

“It’s not pork-barrelling. It’s making sure that the regions … we send a lot of tax receipts to Canberra … making sure that they get their fair share. Not a decision made by some pointy-shoed, faceless bureaucrat who’ll never have their name on a ballot paper.”

Centre for Public Integrity research director Catherine Williams said ministers should set the parameters for a spending program but the decisions should be made at arms-length by the public service.

“This is public money which is not infinite, so that means there is always a public interest in ensuring it is being used in the best and most efficient manner,” she said. “The use of that money has to be done in a transparent and accountable way.”

The Infrastructure Department told the auditor-general it had changed its approach in the two pre-election grant rounds to give ministers more discretion over which projects received money.

The auditor-general also found the ministers’ staff drew up shortlists of projects based on their spread across electorates and whether the local MP backed them.

For the third round, which McCormack oversaw, this shortlist started more than three weeks before Infrastructure offered its written funding recommendations. Projects that made it onto the shortlist were more likely to have been approved than those the department recommended.

While the shortlist was being drawn up by staffers, the department hand-delivered a USB with preliminary advice about projects to McCormack’s office 12 days before its formal written briefing. It didn’t keep a record of what was on the USB, but this included an early copy of the merit ranking and a summary of “sensitive projects”.

The ministerial panel did not meet during this third round and the auditor-general said there was no evidence on record of panel members other than McCormack being involved.

Infrastructure Minister Catherine King indicated on Friday a sixth round of the program, which was being assessed when the election was called, could be cancelled.

“I haven’t made any decisions … but it is fair to say, when you get a damning audit office report into this fund, that it is pretty hard to see that the fund is not corrupted in some way,” she said.