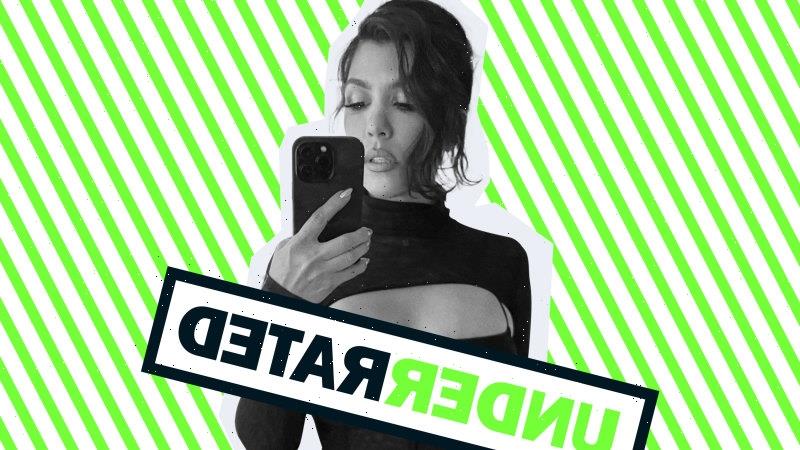 To start with, let’s get the obvious question out of the way: how can someone who starred in TV’s most popular reality series, who has 167 million Instagram followers and constant tabloid headlines following her every move, be in any way underrated? Well, to paraphrase Albert Einstein, who married his first cousin, it’s all relatives.

Relatives, as in her sisters. 167 million Instagram followers might sound like a lot, but it’s the lowest count in the whole family (if you don’t include mum Kris Jenner and Kourtney’s ex-partner Scott Disick, which, come on, who does?). 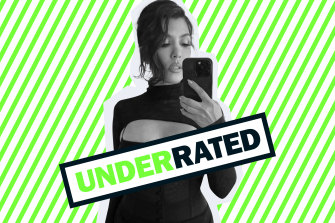 Firstly, she’s aloof and sarcastic, which are the two best traits in celebrities (humans, even). A celebrity who is conflicted about their fame but handles the circus with resigned humour is my kind of celebrity. I mean, it seems like a horrible life, but what are you gonna do, punch a paparazzi and drink to oblivion? Might as well just keep walking. 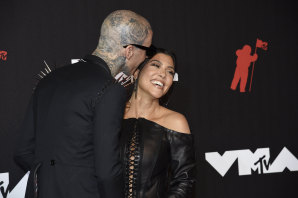 Who knows why she’s this way? Maybe it’s the classic ‘who gives a shit’ mentality of being an eldest sibling, or that she was 24 when the trio’s father, attorney Robert Kardashian, died just two months after he was diagnosed with esophageal cancer. That would be traumatic for anyone, let alone the eldest kid in such a tight-knit family. But what am I, a psychiatrist? I just watch weird people do stupid things on reality TV (see: Khloe and Tristan) and then laser in on the prettiest ones

The other things I like about Kourtney? She has the verve of a street fighter and the integrity of a monk. One of the wilder episodes of Keeping Up With the Kardashians occurred during Season 18, when Kourtney and Kim got into their infamous “catfight” after Kim questioned Kourtney’s work ethic.

You should see the speed at which Kourtney jumped up and Wolverine’d Kim’s arms. “I will literally f— you up if you mention it again,” she warned as she threw bottled water at Kim’s face, and she did. I once read that the key to winning a street fight is to strike your opponent before they even know what’s going down; no needless squaring off or back-and-forth posturing. Kourtney understands. That’s someone you want by your side in an empty parking lot at night.

There’s also something to be said for Kourtney’s reluctance to buy into the show’s bizarre will they-won’t they romance between her and Disick. Disick, who transformed from a Gordon Gekko-esque suit-bro to a jaded casualty of overindulgence over the show’s 14-year run, is the father of Kourtney’s three kids; they split amid his substance abuse and infidelity.

But even by the show’s last episodes in Season 20 (which aired last March), the series was still hinting at a potential reunion, with Disick regularly declaring his love for Kourtney and even casually near-proposing over a family dinner like some sort of nutcase. I don’t think anyone told Kourtney about this plotline: she seemed annoyed the whole time, and, well, declined the proposal with a cool civility.

Which was good because it led to the Summer of Travis. I’m sure you’ve seen the photos: Kourtney and new fiance Travis Barker, former drummer for Blink-182 and the ever-present Forrest Gump of pop-punk, licking each other’s tongues on social media, at Hollywood premieres, at UFC fights. I didn’t know 40-somethings were allowed to behave like this in public, but I like it.

And so too, it seems, does Disney. Judging by preview peeks of the family’s new series, The Kardashians, which premieres on Disney+ on April 14, it’s ready to lean into Kourtney and Travis’ (Kravis? Trourtney?) wild, butt-grabbing shenanigans. In one teaser, Kourtney mentions that “Travis and I want to have a baby”; in another we see a nurse telling Barker to “put the sample in this cup”.

From Blink-182’s Take Off Your Pants and Jacket in 2001 to artificial insemination in 2022, some things never change. But for Kourtney, we should all be willing to go on that ride.