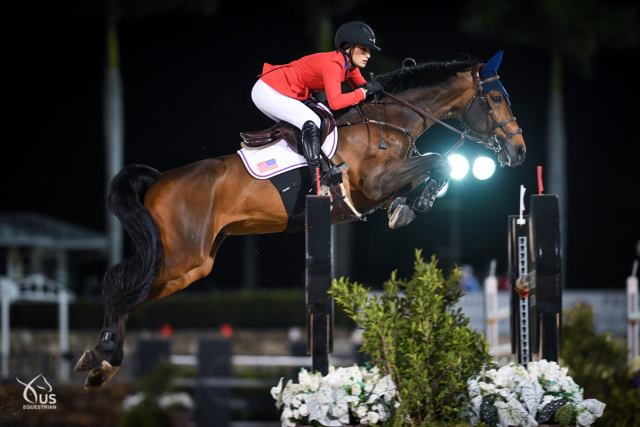 Jessica Springsteen Is Ready to Clear the Fences at the Olympics

Win or lose in Tokyo, family heritage goes hand-in-hand with Olympians as they strive to excel like never before.

Unlike many of the 11,000-plus athletes mining for gold, though, Jessica Springsteen’s personal background is often presented before her equestrian triumphs. Such inverted introductions are routine since her father Bruce has achieved 20 Grammy awards, an Oscar, two Golden Globe awards and a Tony. Her mother, Patti Scialfa Springsteen, knows the different aspects of worldwide fame, having first joined his E Street Band in 1984 and married Springsteen seven years later.

Like any hard charging athlete vying against the world’s finest equestrians, Springsteen is focused on the competition at hand and the years of work that were required to earn a spot on the worldwide stage. Tracing her family tree almost seems to undermine that accomplishment. But considering her father’s “Born in the USA” album has sold upward of 30 million copies, how could one not highlight that slice of Americana?

With that provenance cleared away, Springsteen’s commitment came across loud and clear during an interview last week. With the equestrian competition starting today, Springsteen goes into the Games ranked 14th in the world for show jumping. She started riding at the age of three or four, after the family moved to a farm in New Jersey. Her mother had always wanted to ride horses, so she started taking lessons and soon her daughter wanted to, too. “Pretty dedicated from Day One,” the Olympian said she never wanted to miss a lesson and fell in love with the sport straight away.

By chance her childhood home was located right across from one of the top junior training facilities, Beacon Hill Show Stables, where she first took lessons and trained until she was 18. “It kind of all just happened really naturally,” Springsteen said.

While the perennial Olympic dream was one she envisioned as a youngster and hoped to one day achieve, Springsteen explained, “in our sport, everything has to do with timing. You have to be at the top of your game at the right time, but you also have to a really strong partnership with a really talented horse at the right time. So it doesn’t always line up. But when I got Don[Juan], who I am going to the Olympics on, I really felt that he had all the talent in the world. Everything felt so effortless and easy for him. That’s when I thought I could have a real shot at it.”

After majoring in psychology at Duke University, Springsteen became “really competitive,” trying to set goals and trying to plan backward for that. Instead of the nearly yearlong stretch that it usually takes to form a good, strong partnership with a horse, Springsteen said she and her horse “clicked instantly,” have built upon that and have become really strong. “He is everything I would want in a horse going into the Games,” Springsteen said.

At 29, she is significantly younger than her Olympic equestrian jumping teammates: McClain Ward, 45; Laura Kraut, 55, and Kent Farrington, 40. Men and women compete together in equestrian sports, which consists of dressage, jumping and eventing.

Jumping requires that athletes and their horses complete a course with 12 to 15 knockable obstacles. They receive penalties for each obstacle that is knocked down or refused, as well as penalties for exceeding the time allowed depending on the qualifying competition. The Olympic field for jumping competitions start with 75 competitors. The individual final is open to the 30 best-placed combinations from the individual qualifier.

As for the scarier aspects of training or competing, Springsteen said there really isn’t anything scary about it. “Of course, we’re working with animals and every sport has an element of danger to it, but when you’re going into the ring, you don’t want to be feeling any type of fear. We’re thinking, ‘How can we clear these fences?’ We’re not thinking about what could go wrong where you could get hurt, especially with him [Don Juan]. I never have any doubts about that. He is so reliable and he’s so trustworthy. That gives me the ability to really focus on our job. They can feel your nerves, your butterflies and any sort of fear. So you want to make sure that there is a lot of trust between you so you’re not emitting any of those feelings to them,” Springsteen said.

Like any competitor in equestrian, both Springsteen and her horse needed passports. Horses need passports not only for travel, but to identify individual horses for competition and to ensure all health and veterinary certificates are up-to-speed. With 26 gold medals in the equestrian sports, Germany is the leading Olympic powerhouse in the sport, thanks largely to Michael Jung, who struck gold in individual eventing at the London Games in 2012 and in Rio de Janeiro in 2016.

Riding six days a week every week of the year without any real off-season, Springsteen said, “we’re constantly working together. Normally, it’s just [a matter of] work on the flat, getting them [the horse] really flexible and feeling good in their bodies. When a big competition is coming up, you jump some jumps at home and maybe work on some of your weaker points or things that you feel need improvement.”

All in all, things are very consistent and keeping a routine is imperative, she said. This year, she has been laser focused on making the Olympic team. Normally, though, Springsteen competes nearly every week of the year, typically Thursdays through Sundays. Once home again on Mondays through Wednesdays, entire days are spent at the stable to put in some more riding, getting the horses ready and perhaps going for a walk in the woods, taking them out on the racetrack or trying different things with them.

Now that she is “getting older,” she tries to cover up as much of her body as possible to shield the sun, since they are training beneath it all day long. Anything long-sleeved will do and jodhpurs are another must. Competition calls for the classic britches, show shirt and hunt coat or show coat. Accustomed to traveling every weekend for competition, Springsteen favors anything that is super easy to fold up and shove into any space in a suitcase. Wrap dresses, especially super thin silk ones from Realisation Par, flowy skirts and Grlfrnd jeans that can be paired with any tank top or other simple tops are among her go-to looks. Several years ago she served as a brand ambassador for Gucci and Ralph Lauren.

Her parents certainly know the arcs and tenors of life on the road. Asked if they have offered any advice in that department, Springsteen said enthusiastically, “Yeah, that was something that was really great for me growing up to see them balance the travel and [being] home as well. They have been around the world and they have done it all. It was great for me to see that. I try to take packing advice from my mom. She says to make your outfits before you pack so when you get there, you have it. You don’t have to think about it. You can just throw it on. That’s something that I’ve definitely started to do as I’ve gotten older. I try to pack as light as possible now and have everything planned out. They’ve given me a lot of advice on traveling and how to balance everything.”

Her father and mother are also well-versed about being in the public eye and on the international stage. (They once performed in front of an audience of 160,000 in Berlin in the summer of 1988. While mass crowds are not a factor at the Summer Games due to COVID-19 safety restrictions, glaring global fame is.) Asked if they have offered any guidance, Springsteen spoke of emulation more so than direction. Growing up, she and her two brothers, Evan and Sam, recognized their parents’ work ethic and dedication to a passion that they had, which enabled to apply that to their own lives. “When it comes to my riding, I’ve always felt super focused in the ring. That’s something that I love the most about it. When you’re in the ring and that bell goes off, you’re completely focused on you and your connection with your horse. Any outside things that may be going on really fades to the back. That’s one of my favorite things about it.”

As for whether going to the Olympics has greater resonance, given the hardships that so many people have faced in the past year due to the pandemic and her father’s reputation for writing anthems about the American Dream and people’s everyday struggles, Springsteen said, “Absolutely. To represent my country, especially alongside riders I’ve admired throughout my life. McLean, Kent, Laura are all such incredible riders with so much experience. They’re able to have so much focus under pressure. To be selected for a team next to them is just a huge honor. Representing my country has always been something that I take great pride in. To now be doing it at the Olympic level, is really just a huge honor for me. It means so much to me.”

While her father’s podcast with former President Barack Obama about race, American identity, social justice and other topics has evolved into a book “Renegades: Born in the USA” that is due out from Crown in October, Springsteen is a supporter of Black Lives Matter, as her 273,000 Instagram followers know. Asked about the responsibility that athletes have as public figures to speak out about social issues, she said, “We always need to be working toward and striving for diversity in our sport and in everything we do. In this day and age, we all need to use our voices and speak out on things that are important to us. That’s what I hope to do.”