‘Icy and restrained!’ Kate and William could learn from ‘openly romantic’ European royals 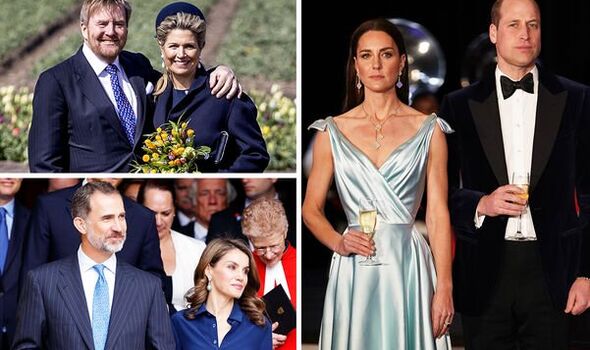 Kate Middleton and Prince William rarely display public signs of affection – unlike European royals. Most recently, the Duke and Duchess of Cambridge visited the Caribbean on a royal tour and the couple were seen touching one another only a few times while photographers were around. Compare that to the King and Queen of the Netherlands for example, they were seen walking hand in hand through fields of tulips earlier today, before cosying up to one another for an official photograph. Express.co.uk spoke to body language expert Judi James about the difference between British and European royals when it comes to being tactile with their partners.

Judi said: “Looking at the body language of other European royalty does prompt the question: Why are our own royals so touch and PDA averse?

“For our UK royals there seems to be a belief that tactile, affectionate and openly romantic rituals will damage the royal veneer.

“But a study of the happily relaxed and loving signals between some of their European counterparts suggests their displays could add to the royal charisma rather than erode it.

“For the Queen’s generation the rather rigid formality was probably traditional and these more icy displays seem to have been inherited by Prince Charles in his DNA.

“This generational trait clearly had other compelling reasons thanks to Charles’ divorce.

“But even though maintaining a hands-off distancing with Camilla might have been seen as tactful initially given their circumstances, there are no excuses for a lack of thawing now that she is fully integrated into the royal Firm.”

She continued: “Even William and Kate are restrained in their signals of love and passion together, rarely performing anything but the most low-key PDAs despite being in a loving and drama-free marriage.

“In contrast, the body language between Queen Maxima and King Willem-Alexander of the Netherlands is a joy to watch.

“Hand-in-hand in a tulip field, his beaming smiles with his rounded-apple-shaped cheeks are mirrored in her own beaming smiles of authentic happiness.

“Their togetherness signals mark them out as a couple, with torso closeness and signs of pride and fondness for each other.”

“Even in more formal eveningwear, they prove you can do elegant and loving at the same time.

“He places one arm around his wife’s shoulders and she nestles in against him lovingly.

The expert added: “Crown Prince Frederick and Princess Mary of Denmark are another royal couple happy to signal their own closeness and happy affection.

“Their torsos are often welded together and at their wedding they did several balcony kisses.

“This included taking it in turns to plant some very tender kissed on each other’s heads before kissing fully on the mouth.

“Even the more elegant and regal-looking King Felipe and Queen Letizia of Spain will frequently use some openly romantic and loving displays, including tender face-touching or bouts of eye contact.”

Judi concluded: “It’s clear William has always been cautious about creating the same kind of frenzy of interest around Kate as there was around his mother, who was much more expressive with her body language signals of affection.

“But perhaps some of these other royal couples could provide a role model for the Cambridges when they do finally ascend to the throne.”