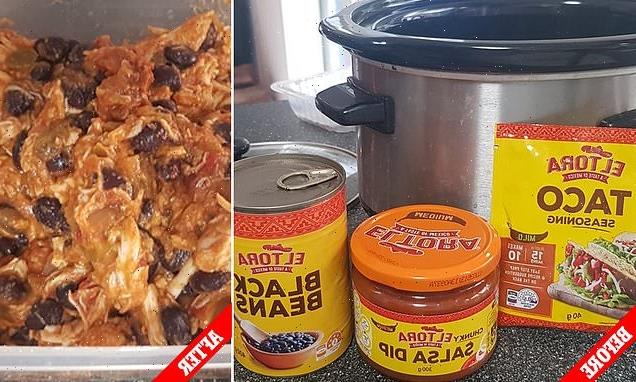 Foodies are losing their minds over four ingredient pulled chicken

The four-ingredient family dinner can be prepared in a slow cooker in advance and makes an easy pre-prepared weekday dinner option.

The budget-friendly dish feeds a family over four for under $15, and the mum said she often has leftovers for a lunch the next day. 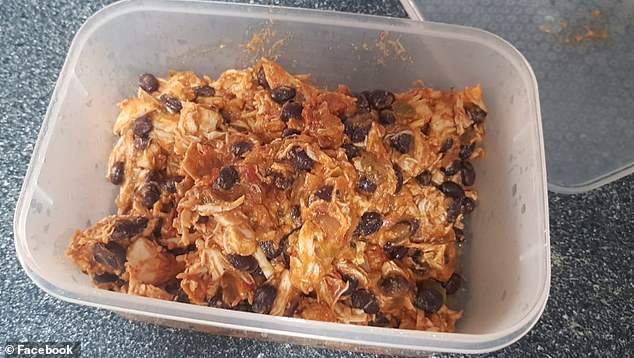 ‘So easy, this is a favourite in our house with everyone,’ the mum said when she uploaded her recipe to popular group ALDI Mums.

She roughly chopped chicken breasts and placed them in the slow cooker.

She then cut them into three to four ‘largish pieces’, she said if they are too small they are difficult to shred.

The mum then added one packet taco seasoning and one jar of salsa, and stirred until combined.

She left the mix to cook on auto or high for three to four hours, then shredded the chicken with two forks and mixed in a can of drained black beans.

The mum roughly chopped chicken breast into three to four ‘largish pieces’ (pictured). She said if they are too small they are difficult to shred

She ‘cooked it ahead for the week’ to have a wholesome weekday dinner ready.

The home-cook keeps the dish low-calorie by serving it in lettuce cups with a dollop of sour cream, but the rest of the family have it in tortilla wraps with sour cream and cheese.

Her recipe serves two kids and two adults, but she said there is leftovers sometimes.

Foodies are very impressed with the meal-prep recipe.

‘Have to try this,’ one woman said.

Several suggested serving it over nachos or rice, whilst others advised adding corn kernels, chopped tomatoes, avocado or cheese.

* Add one packet of taco seasoning and one jar of Salsa. Stir until combined

Another chicken dish using ALDI ingredients was popular amongst foodies this year.

The three-ingredient dish, which calls for chicken stock, a butterflied chicken and a bag of rice has been described as ‘cheap, tasty and easy to make’ by Aldi fans. 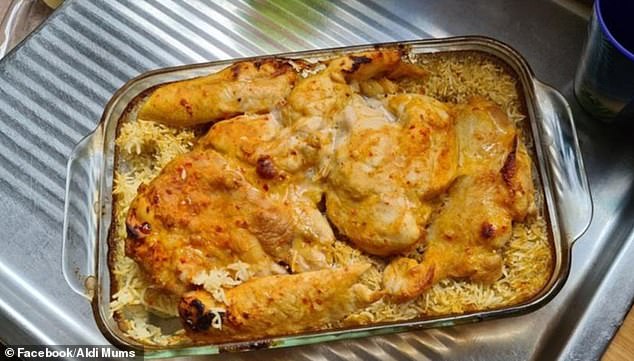 Home cooks posted their attempts at the recipe in the Aldi Fans Facebook Page where the explained exactly how to pull off the delicious meal.

The cooks said it is important to add the rice to the dish first, and explained they simply pour a cup of uncooked rice on the bottom of the pan.

They then lay the uncooked chicken on top before adding two cups of chicken stock and placing it into the oven for 45 minutes or until cooked.

People keenly followed along at home and were equally impressed with the results.

‘Jumped on the chicken and rice train and it came out perfect,’ one mum said.

Some even used an air fryer instead of an oven and said it was amazing.

ne mum explained her own tweaks to the recipe.

‘I doubled it – family of six here. So two cups of rice and a litre of stock with jasmine rice – was really yummy.’ 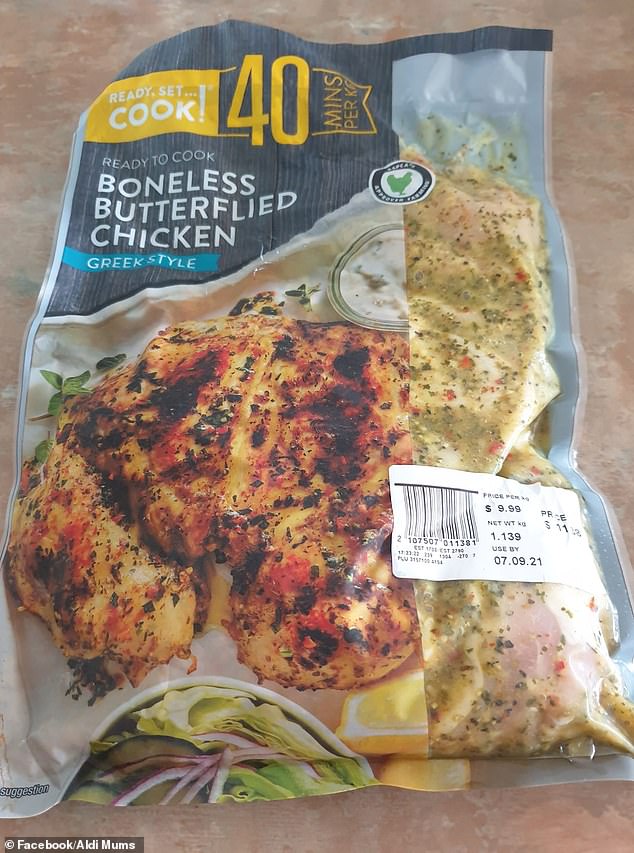 Others thanked people for sharing the quick meal hack adding it is ‘the best chicken they have cooked at home’.

The meal can be made with basmati, jasmine, Arborio or long grain rice according to different comments.

Some people said they added cherry tomatoes and zucchini to the dish and it ‘worked well’.

The chickens cost about $11, but prices are as marked.