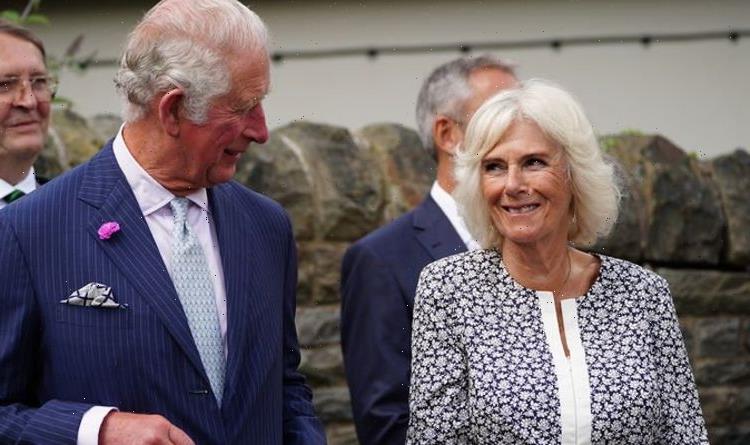 Prince Charles, 72, and Camilla, Duchess of Cornwall, 73, carried out several engagements in South Wales on Wednesday and Clarence House shared pictures from the royal visit in a series of tweets. According to a body language expert, future consort Camilla is careful to let her husband shine on joint engagements.

The first Clarence House tweet on Wednesday’s royal visits read: “Earlier today, The Prince welcomed Poet Laureate Simon Armitage to Llwynywermod, The Prince of Wales and The Duchess of Cornwall’s home in Wales.”

“Originally built in 1346 and rebuilt in 1773, @LlanGuildha was the centre of governance of Llantrisant.

“Nearly derelict in 2010, an extensive fundraising campaign was able to raise the money to restore the building.”

The tweet added: “@LlanGuildhall celebrates the history of the town and provides an activity centre for school groups, concerts, ghost walks, and all types of community events.

Another tweet was accompanied by a clip of Camilla at a vineyard and read: “A beautiful day to visit a vineyard in South Wales!

“The Duchess of Cornwall is marking the 10th anniversary of Llanerch Vineyard, who produce the award-winning Cariad Wines.”

And a fourth read: “On average Llanerch Vineyard produces 12,000 bottles a year with up to 18,000 on exceptional years!

The Duchess of Cornwall, President of @Wine_GB, samples some of Llanerch’s wines.”

According to the expert, Charles and Camilla make a strong “double-act” and the Duchess allows her husband to be in the spotlight.

Judi said: “Charles and Camilla’s body language defines such a complimentary double act that it just has to be responsible for the Prince’s signals of relaxed fun, confidence and good-humour recently when they are out together on royal visits.”

The Duchess is “tactful” when it comes to putting her husband, the future king, first, Judi claimed.

She added: “Camilla is incredibly tactful in terms of her non-verbal signals with him, standing either alongside or just behind her husband with her hands clasped in front of her torso in a gesture that deflects all the attention and spotlight onto Charles.”

The analyst said: “Her smile looks kindly and full of approval for whatever she is seeing or whatever he is saying or doing and this sweetly flattering and supportive ‘audience of one’ seems to encourage his performer side.

“Here we can see him on the brink of or in the middle of a joke in every shot.”

She added: “He is literally nudging the archer and grinning broadly and in the line-up, we can see both his hands are partly raised and his brows furrowed in his signature look when he is delivering a funny line or question.

“Even standing with his hands behind his back his cheeks are raised in what looks like a naughty smile and when he is wearing a face mask in the last pose his forward lean and eye-crinkling signal that same sense of humour.”