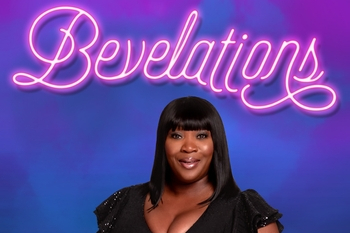 Bevy Smith Is Finally Exactly Where She Wants to Be

Bevy Smith is in a bit of disbelief as she dives into her press tour for her memoir. It’s been a long time coming, this moment of celebration for the mega career shift from fashion executive to TV personality, and here she is talking about her life’s major pivot two days after the attack on the Capitol.

“If someone had told me that I would be launching my book in the middle of a global pandemic, and in the middle of racial strife and a racial uprising in America, and then an actual coup being led by an imbecile president?” Smith says over Zoom, from her home in Harlem, N.Y. “You couldn’t even write this, right?”

Smith, who has written “Bevelations: Lessons From a Mutha, Auntie, Bestie” — out now from Andy Cohen’s imprint — says that, in fact, she’s been able to find some meaning in the timing of her book’s release.

“Because this book is about the pivot, the reinvention and also going through arduous times and coming out on the other side of it and still managing to be grateful while you’re going through these valleys, it’s actually really a great time for me to be talking about this book, as I believe that a lot of people need to hear the message,” she says.

Smith, who is 54, spent the first part of her career as a media executive, working at Vibe and Rolling Stone in her 20s and 30s. Despite the glamour of flying to fashion weeks, sitting front row and rubbing elbows with fabulous clothes and famous names, Smith first began to feel dissatisfied with the path at 33. It would take her another five years to fully process what she was feeling and leave the $350,000 job for $35,000 and the pursuit of her dream: becoming the personality we know today as Bevy Smith, the current host of SiriusXM’s “Bevelations” on Radio Andy and a former cohost of the “Page Six TV” and Bravo’s “Fashion Queen.”

Streetwear’s Leaders of the New School

“I let my past successes fuel my future ones. I’d already achieved things that no one predicted that I would be able to. I’d already proved naysayers wrong my entire life, not to mention my entire career,” Smith says. “So I literally went into this idea that I could become a TV personality with a lot of youthful optimism. I approached it like I would think a 21-year-old girl would approach something. Like, ‘Oh my God, the world is my oyster; I could do whatever I want.’ I just didn’t have that angst about it. Once I decided it was what I wanted to do, I was like, ‘I can do this,’ but I had no idea that it would take so long to get it done.”

Smith says she never let her age, gender, race or body type limit her in what she dreamt for herself as possible.

Her background in fashion has surprised her by the doors it’s opened and the interest it’s drawn.

“No matter what room you go into, and I’m talking about from political spaces to Black power spaces, any space that you go into, people are fascinated by the fashion business. And there’s a wonderful calling card,” Smith says. “That was incredible to me, that that would actually help me get into so many rooms. I got so many clients. That brought me so many gigs because people were fascinated by it.”

Smith has many projects up her sleeve — production on shows in the works, art curation for a major motion picture, a children’s book — but for the moment she’s savoring that this chapter of reinvention has come to a close. She’s officially arrived.

“The book is the crescendo of this chapter of my life. So for many years, I referred to this part of my life as my new life. Well, this is no more my new life,” Smith says. “I am officially a media personality. No one can ever take that away from me. When you Google me, all that comes up is that I do TV and radio and I’m a public speaker. So that’s done. The advertising part of it only comes into play because of this book now, or because maybe I’ve talked about it in the past. But no, this is where I am right now.”