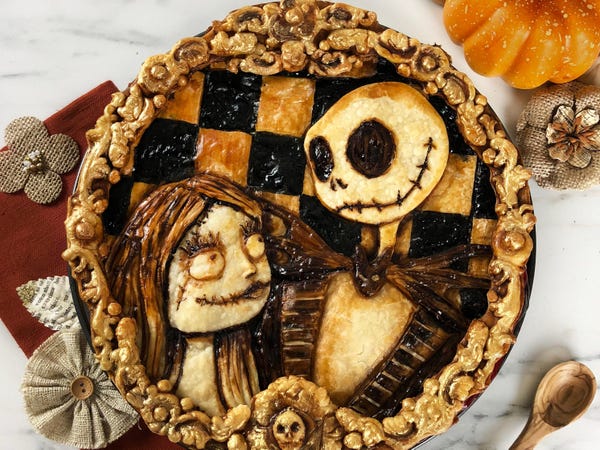 However, for baker and pie artist Jessica Leigh Clark-Bojin, making baked goods is a year-long hobby. She previously grabbed the internet's attention with her incredibly detailed Baby Yoda pie.

Insider spoke with the self-taught baker about what inspired her Halloween pies and what she would tell new bakers looking to try their hand at pie art.

Self-taught baker Jessica Leigh Clark-Bojin started baking pies at home after she cut refined sugar and sugar substitutes from her diet for a year. 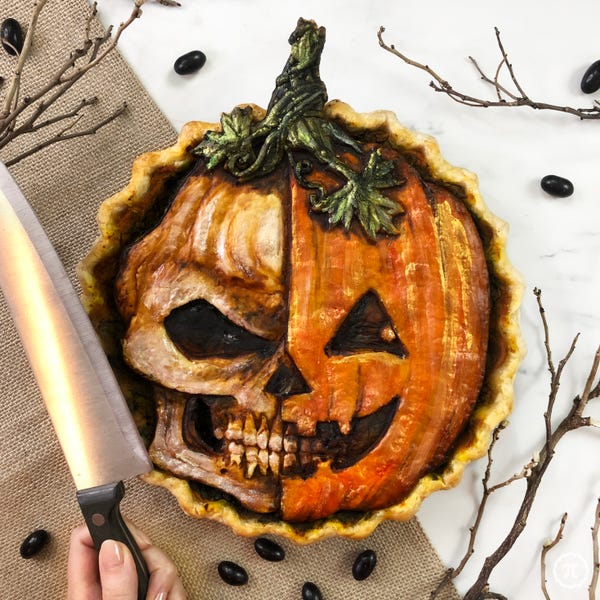 "I became really desperate for some form of dessert that I could actually eat without cheating," she told Insider in an earlier interview. "I knew that I could theoretically make a decent-tasting pie using just apples, spices, and unsweetened shortcrust pastry — I just had no experience in the kitchen."

From the very beginning, Clark-Bojin had an interest in creating pies with artistic decorations. 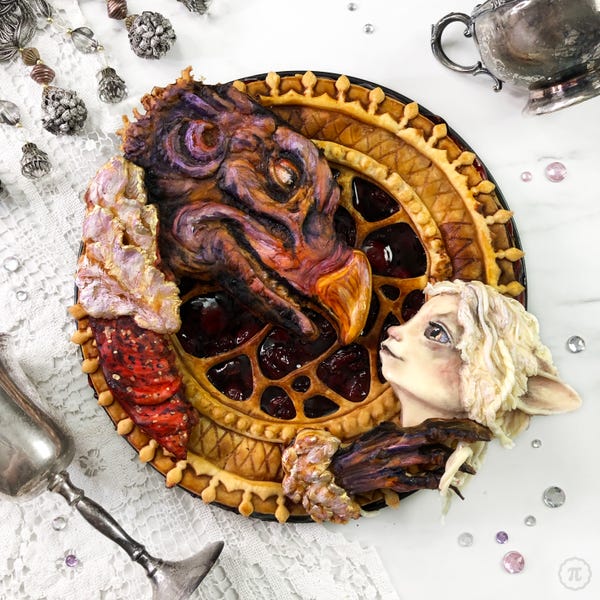 After making her very first pie with a box of Crisco and a recipe, Clark-Bojin was pleased with the result.

"It was pretty good!" she said. "I happened to cut out the shape of a dragon on top and my family thought that was neat, so I kept making artsy designs for my pie tops."

As a huge fan of Halloween, she takes inspiration from her favorite scary movies. This pie shows an iconic scene from "The Shining." 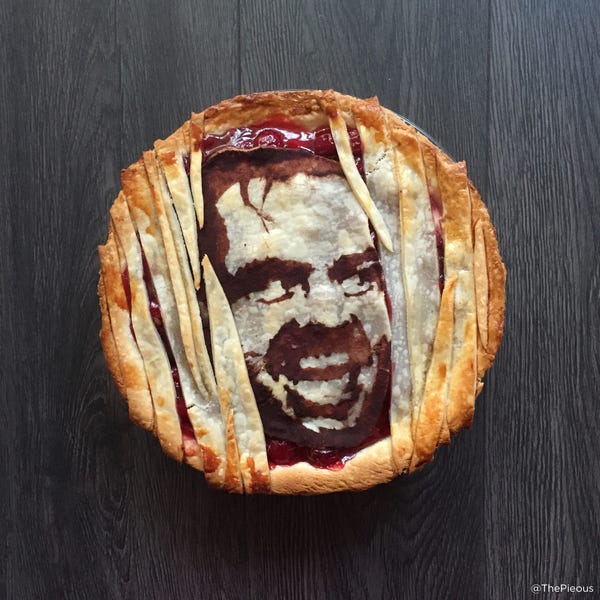 "I love Halloween," Clark-Bojin said. "I have so many amazing memories from childhood and teenagerhood … The holiday is an excuse to explore taboos and be unapologetically yourself."

She also made an incredibly detailed pie inspired by "Maleficent." 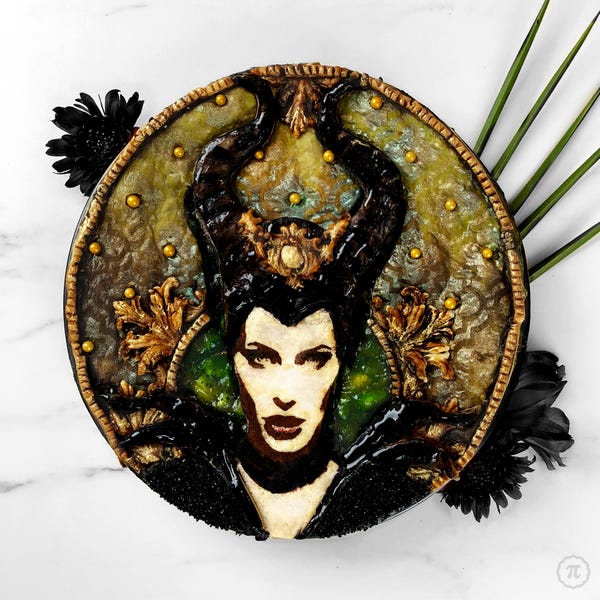 The pie top features an extreme likeness of Angelina Jolie's character, painted with maple syrup to get a leather-like look.

"I was a bit of a goth growing up, and have a tendency to favor the macabre … which is not always smiled upon in baking circles," Clark-Bojin said. 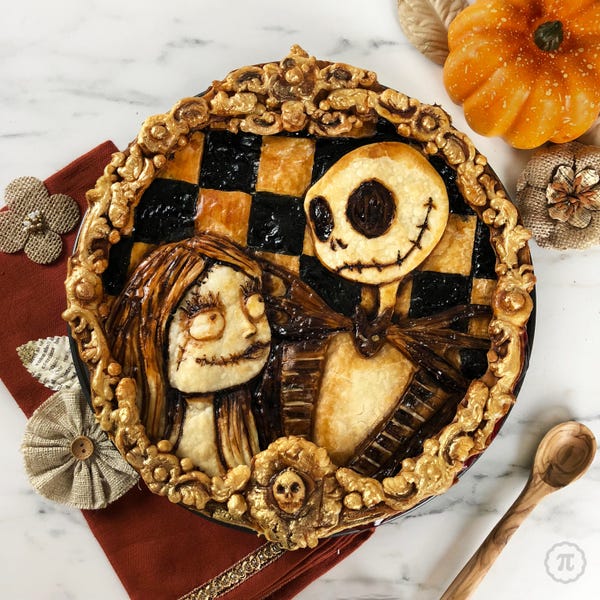 This pie was inspired by "The Nightmare Before Christmas."

"The Nightmare Before Christmas" is one of Clark-Bojin's favorite Halloween movies. 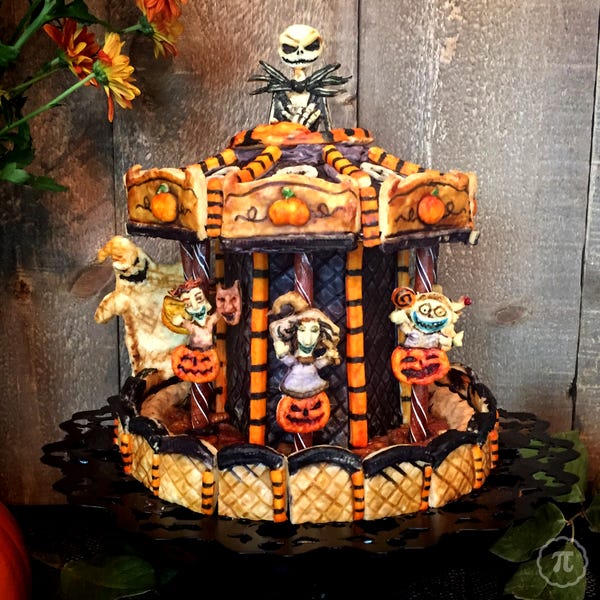 Some of Clark-Bojin's pies are full productions, like this carousel featuring characters from the movie. The carousel features two different pies — pecan on the bottom, pumpkin on the top, according to the baker's Instagram.

"For 31 days in October, I have carte blanche to make any spooky thing that pops into my head," Clark-Bojin said. 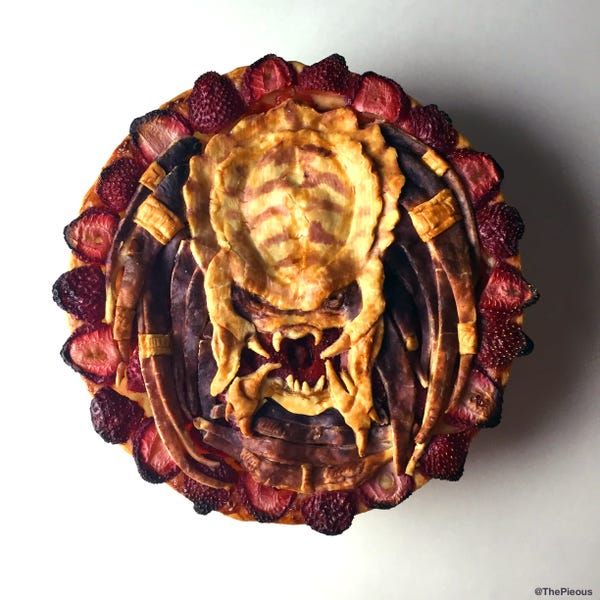 This pie inspired by "Predator" is downright horrifying.

This creepy creation was inspired by fans' requests for a "Coraline"-inspired pie. 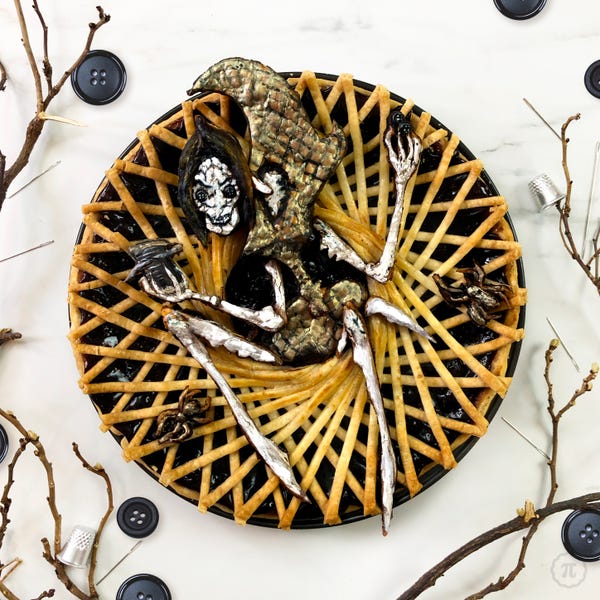 She chose a "spoke" design for the background and documented the process on Instagram.

"It took me a few tries to get it right … but I learned a ton from the process," she wrote. "Failure is always my best teacher — as long as I eventually figure it out!"

Of all her Halloween pies, this one featuring characters from "Over the Garden Wall" is Clark-Bojin's favorite. 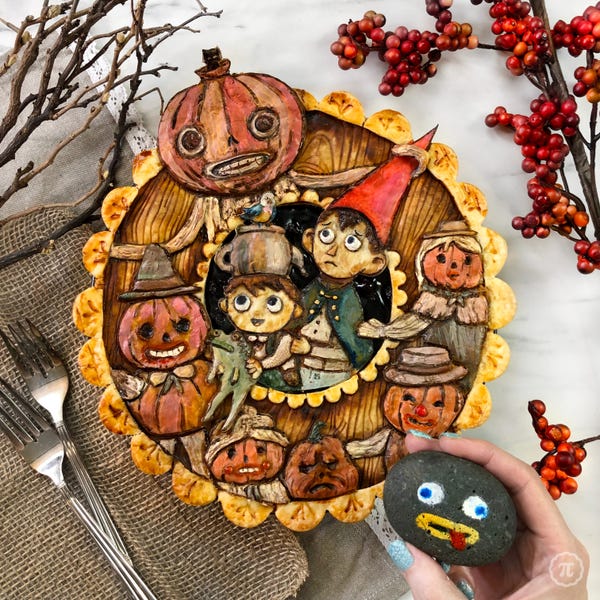 "I just love that show so much — it's so charming and weird," she told Insider. "It's a rock fact!"

For Clark-Bojin, baking has been a fun distraction during the coronavirus pandemic. 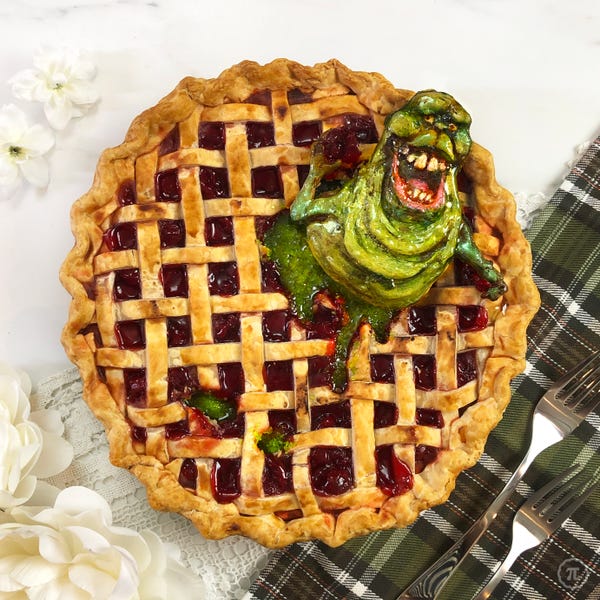 "Dropping off a pie to a friend or neighbor's house is about as old as friends and neighbors … and mercifully, it has remained one of the few activities still safely open to us during the pandemic," she told Insider.

She isn't surprised that interest in baking has grown during the pandemic. "Cracking eggs and sifting flour can be almost meditative for a lot of people," she said. 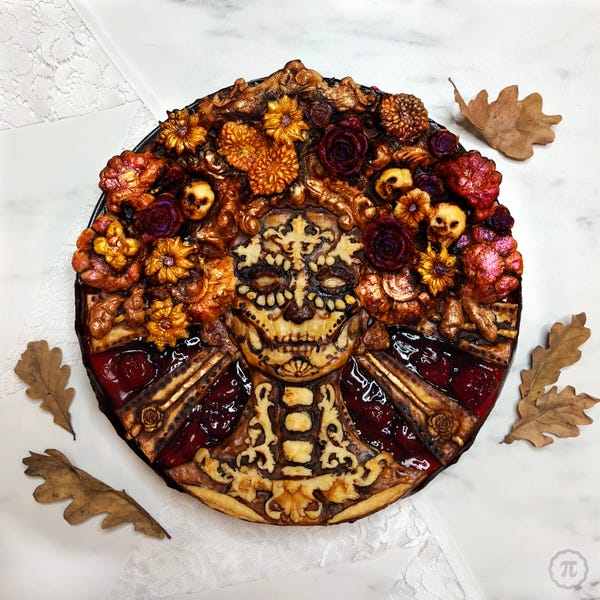 "It's a simple, back to basics way of expressing oneself creatively and engaging in something unambiguously good," she said. "What's happening in the world right now, politically, environmentally, socially, is very important … but we can't all be dialed up to 11 all the time."

For beginners, she recommends starting with a simpler design, like this monster pie. 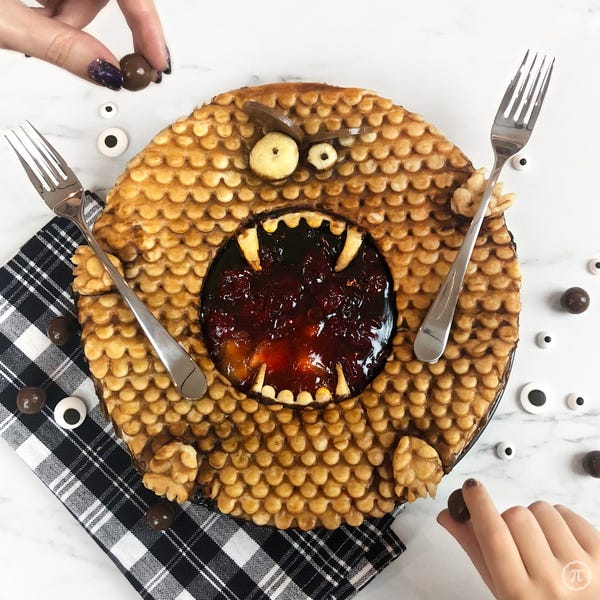 Clark-Bojin has a video tutorial on Instagram showing how to make this pie — she said her 6-year-old son did most of the work on it.

"The easiest way to dive in if you're terrified of pie dough, but want to try out pie art, is just to buy a roll of pre-fab dough and start playing," she told Insider. 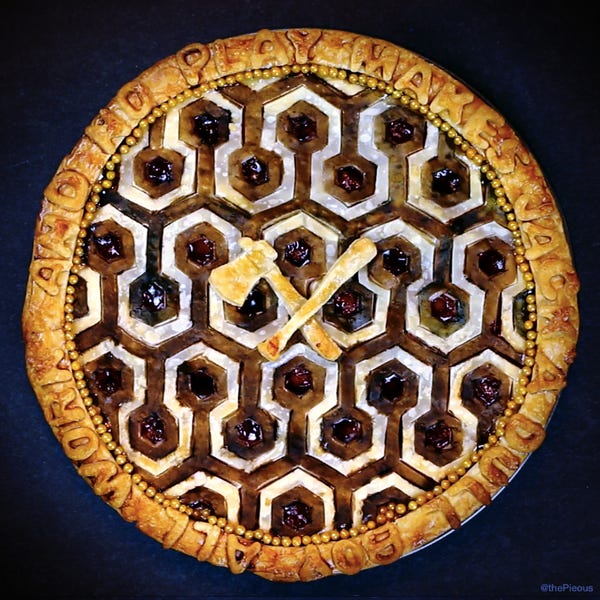 "If you're ready to have a go at your first scratch-made pie, I recommend starting with shortening because it has the highest melting point of all the fats. Plus it's vegan — bonus!" she said. "This means you have more time to fiddle around with your design and you don't have to worry as much about the dough getting tough. It also puffs up the least in the oven."

However, pie art can be made with every kind of dough. 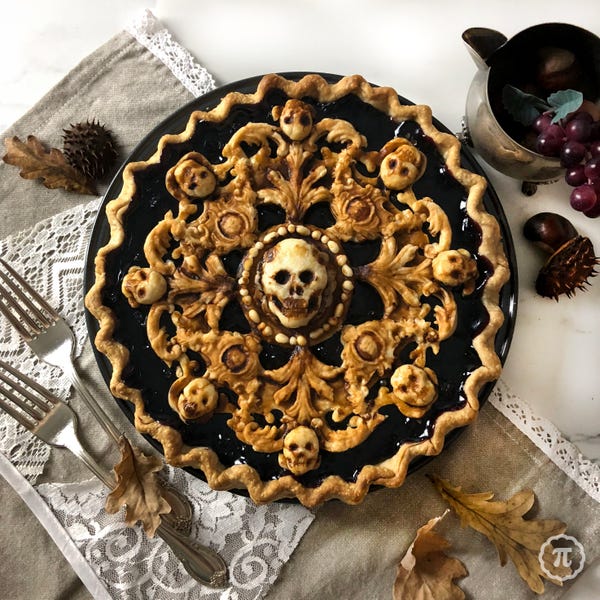 "All-butter crusts can still make lovely designs — you might just have to pop your work in the freezer periodically for a minute or two to keep the butter from melting," Clark-Bojin said.

Clark-Bojin is asking her followers to share their own spooky Halloween pie art with her on Instagram, and she's been impressed with the designs so far. 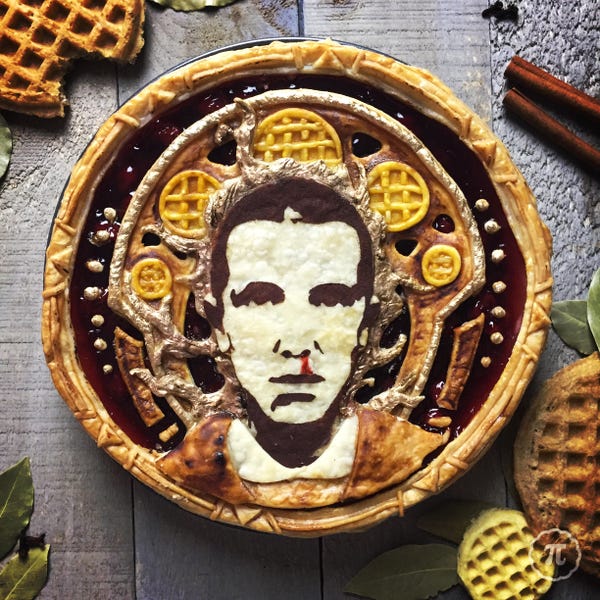 Bakers can tag their photos with #MonsterPie to share their designs.

"We may be stuck in our homes this holiday, but that certainly hasn't dampened our spooky spirit in the kitchen," Clark-Bojin said. 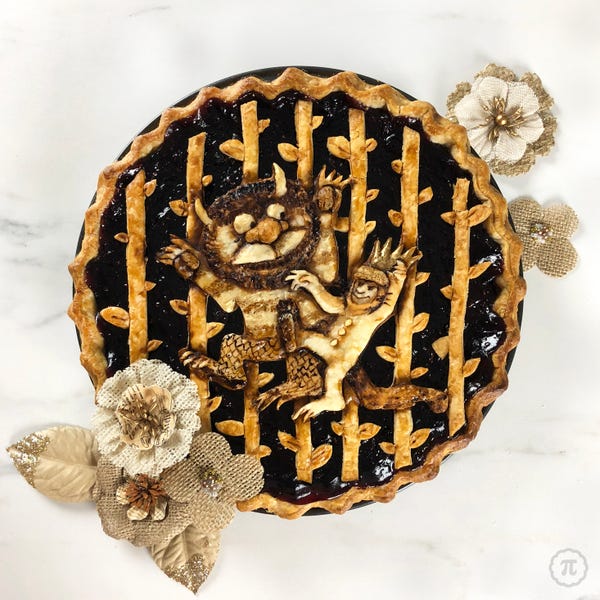