Home » Entertainment » A Decade Later, Salem Returns to an Even Darker World

A decade ago, it felt practically mandatory for a certain kind of in-the-know music fan to have an opinion on Salem, and it wasn’t likely to be a neutral one. The Midwestern trio of Jack Donoghue, John Holland and Heather Marlatt had been anointed the godparents of a heady strain of nihilistic electronic music that seemed to alienate as many listeners as it bewitched.

The group mixed the sounds of sludgy Southern rap with dizzy shoegaze, deconsecrated church music and recordings of terrible accidents, all with a reckless abandon that made some critics wonder whether they were being punked. And then, after just a handful of releases — the 2010 album “King Night” was its only full-length — Salem was gone, slipping out the back door of a party it had crashed.

“I think when we got attention from anyone back in the day, it was novel,” Donoghue, 32, said on a video call from an empty-looking room in the Chicago neighborhood where he grew up, a woodsman’s beard shrouding his once-boyish features. “Then the novelty wore off.” Holland, 35, nodded solemnly from an adjacent window of the Zoom, hunched in the dimly lit bedroom of his Traverse City, Mich., home. A blurry tattoo was scrawled across one of his cheekbones that, upon closer study, spelled “CRYME.”

It was just over a week before the Friday release of “Fires in Heaven,” Salem’s second album, a record so long in the works, even Holland and Donoghue sometimes doubted that it would materialize. (The group is now a duo.) And it was less than 24 hours until Holland was due to report to the Grand Traverse County Correctional Facility to serve a 30-day sentence for charges he’d rather not discuss. “It’s unfortunate,” he said softly. “But whatever.”

The duo has grown used to this type of mythically bad timing throughout the creation of the new album, though it’s quick to own up to its role in the chaos. “Literally, it’s all a war with ourselves over here,” Donoghue said, taking occasional drags from a vape pen; Holland’s smoke remained analog.

Pieced together from five years of writing and recording sessions in Michigan, Los Angeles and Louisiana’s Gulf Coast, the songs on “Fires in Heaven” do not drastically depart from the sound Salem pioneered in the late 2000s — a doomed, druggy and occasionally rapturous aesthetic that earned the moniker “witch house.”

It was an era marked by lingering unease from the 2008 financial crisis, when newly available production software and seemingly limitless sample material led to a boom in bedroom recording. Witch house’s devotees were known for a casual embrace of occult aesthetics and a habit of replacing words with Wingdings; grouped under the microgenre’s banner were acts including the duo White Ring and the producer oOoOO (pronounced “oh”).

Still, Salem’s music stood out. It was billed as scary but more often felt unspeakably sad, even if you couldn’t make out the lyrics. “I think a huge part of their magic and their enduring appeal is just how real it is,” said Travis Egedy, who records as Pictureplane and is credited with coining the term “witch house.” “They created their own reality and listeners had to go into that world to access them,” he added. “Even in the independent underground scenes, that rawness is rare. Salem are unapologetically Salem.”

Musically and otherwise, the band pushed things to the edge — which could mean mangled covers of trance hits, infamously sketchy live performances, interviews in which members admitted to addiction and prostitution, or a tendency for Donoghue to rap in a voice slowed down and warped like a DJ Screw mix, a choice that earned the band criticism for appropriating hip-hop tropes.

Donoghue’s raps are the first vocals on “Fires in Heaven,” growling, “Ask me what I’m doing with my life, ain’t [expletive] to tell ya” over a lurching sample from a Russian ballet. “We deeply care, and are deeply invested, but only in our own rules,” Holland said.

Donoghue picked up where he trailed off: “And if there’s no one that wants to listen to it, we’ll still make music together. I mean, we made music for 10 years without sharing it.”

That decade began with a mainstream acceptance Salem never saw coming: The band soundtracked Paris runway shows and cranked out remixes for Charli XCX and Britney Spears. In 2013, Donoghue contributed to the production on Kanye West’s “Yeezus,” an album with an industrial grit that could be called Salem-inspired. (“I still haven’t been paid for that,” Donoghue said with a laugh. “So, yeah.”)

But instead of leaning into the hype, the duo retreated entirely, collaborating on songs that went unreleased and working odd jobs. By 2016, Donoghue had moved to Montegut, La. — a fishing town with a population of just over 2,000 — with plans to work on an oil rig, though jobs almost immediately dried up as gas prices plummeted. When Holland hit him up, explaining that he’d just lost someone in Michigan and things weren’t going great, Donoghue suggested his bandmate head south. 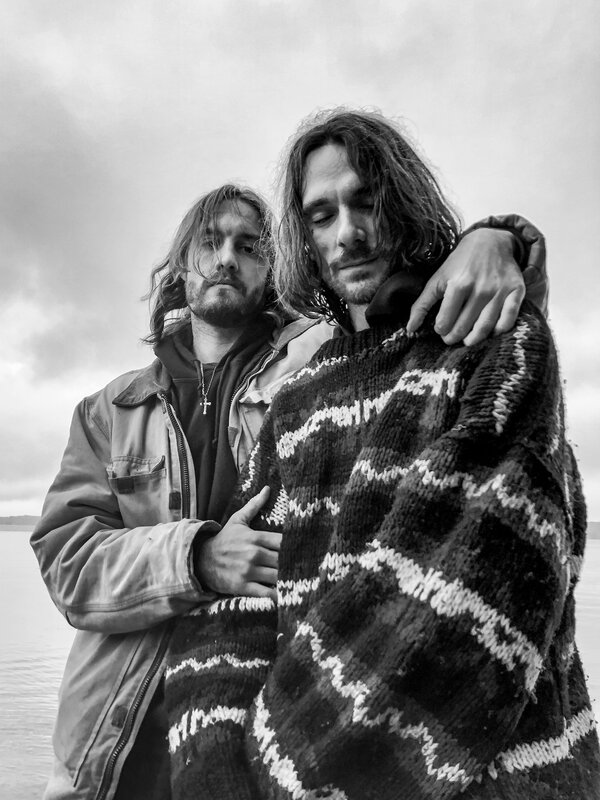 The pair moved into an old fishing camp, where they wrote most of the songs on “Fires in Heaven” and got into some trouble. “The longer we were down there, there was a mounting pressure, because, you know — some of your [expletive] follows you,” Donoghue said.

Holland and Donoghue packed up a U-Haul and drove to Los Angeles, but attempts to finish the album weren’t successful. “Just building any relationship or structure to put it out, it sounds super easy, but it’s not,” Donoghue said. “And I felt like if I talked about it, I would jinx it — and then we just won’t do it.”

Holland returned to Michigan, and Donoghue got a job installing windows. But with the help of Henry Laufer, better known as the electronic musician Shlohmo, the record was coaxed into completion. In an email, Laufer said the music had been scattered across locations and lost files, “but the songs were undoubtedly amazing, even just as demos.” The duo spent weeks at a time in Laufer’s home studio, working obsessively, as Laufer became part cheerleader, part “spiritual guru.” “In a time of such garbage, this was all I wanted and needed to hear,” he said.

Though it took 10 years, the punishing wall-of-sound collages and echoing melodies of “Fires in Heaven” sound right on time. In part, that’s because of the band’s quiet but enduring influence on today’s musical landscape: the melancholy raps of Drain Gang and GothBoiClique, the murky pop of Billie Eilish. “Salem’s sound was so influential for younger people because it showed music could be made in a very lo-fi and D.I.Y. way and still be extremely visceral and impactful,” Egedy said.

This time, it’s easier to hear the beauty in the darkness, from the swirling synths of the first single “Starfall” to the funeral march of “Red River,” with a half-sung chorus that pleads, “Angels with burning wings, watch over me.”

Holland and Donoghue said they have been thinking a lot about heaven and hell, more as realms of Earth than the afterlife. “Maybe there isn’t really good or evil, and what people think that is is just, like, interchangeable,” said Holland, whose painting of a demon peeking from behind an angel appears on the album’s cover.

In the past, the band’s members were candid about their own demons, which didn’t hurt their mystique but remains a strange burden to shoulder. Holland and Donoghue’s circumstances have changed, but they haven’t left the chaos behind. Which is how the pair found themselves in Tulsa, Okla., during tornado season, following a veteran storm tracker in the video for “Starfall.”

“I think both of us are attracted to intensity,” Donoghue explained. “While we were out there storm chasing, there would be these moments when I’d look at John and he would be so present, so happy.”

Holland noted that the danger was soothing: “It was a very weird sensation to be so close to something that could kill you, and be so comfortable with that,” he said. “It felt really natural. Right, Jack? Like, I wasn’t scared at all.”

Donoghue agreed. “I think we, in many maladaptive ways, have sought for surrender. And in many beautiful ways, sought surrender. You know what I mean, John?”

Holland nodded, his hair falling like a curtain over his eyes. Then his call dropped, and the screen went black.

Drew Barrymore Hires Her Body Double to Go to Rehab for Her in ‘The Stand In’ – Watch!