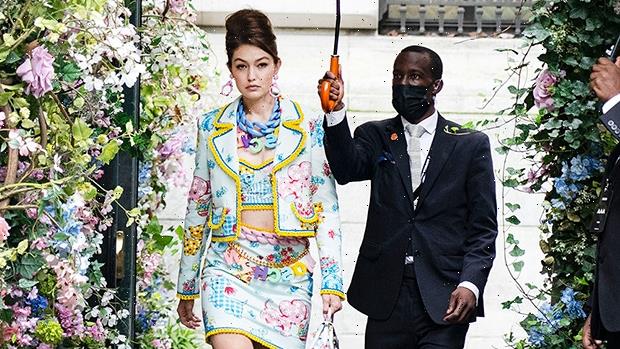 Less than a year after giving birth to her first child, Gigi Hadid is back to being a regular on the runway — and she played the ‘new mom’ part perfectly while walking for Moschino on Sept. 9.

Gigi Hadid rocked two incredible looks for the Moschino show during New York Fashion Week on Sept. 9. Her first look of the night featured a matching crop top, skirt and blazer. All three pieces were adorned with animals, colored with various colors and patterns. There was a braided pink belt around her waist, along with a blue one around her neck. Both of the accessories had the word MOSCHINO dangling from them, with the letters written in rainbow pastel colors. The look was complete with a dramatic updo, pink earrings and a purse to match the outfit.

For her second look of the show, Gigi rocked another colorful ensemble. This time, it was a one-sleeved dress, which featured an array of different colors and patterns throughout. Again, there were animals and other elements of nature sprawled throughout the fabric. In fact, the one sleeve was in the shape of an elephant’s trunk! With the design resembling that of kids’ clothes, Gigi accessorized with a baby bottle, which she put into her mouth as she strutted down the runway. Her earrings for this look were bright blue peace signs, with her hair still pulled back into the updo. 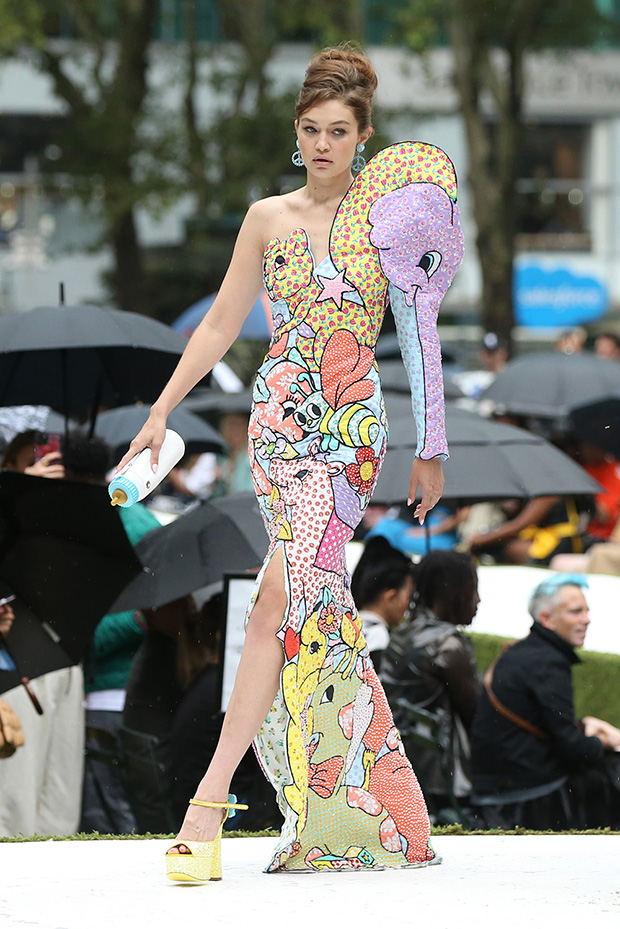 Gigi wasn’t the only familiar face on the Moschino runway, though. Irina Shayk also modeled in the show, along with Winnie Harlow. Meanwhile, Jordan Clarkson, Taraji P. Henson, Megan Fox and more stars were seated in the front row to watch it all go down.

The stars have really shown up for NYFW in the fall of 2021. Of course, things were much more low-key in the modeling industry amidst the coronavirus pandemic in 2020, so there was more excitement surrounding the event than ever. Plus, the Met Gala will fall right in the middle of all the madness on Sept. 13, so these models and stars have a lot to look forward to in the coming days!