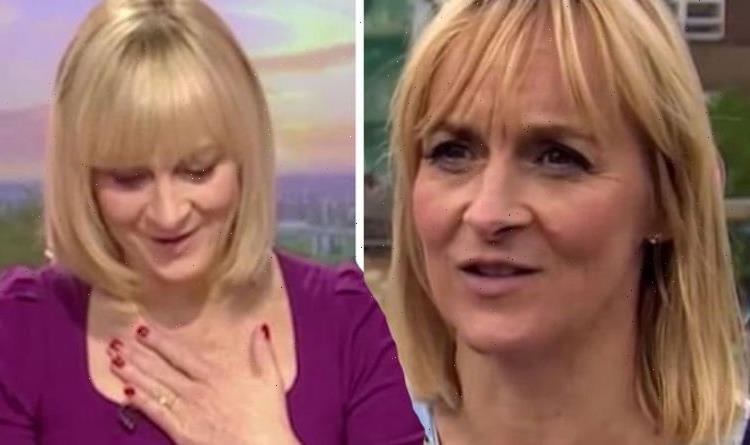 BBC Breakfast viewers only have three days left of watching Louise Minchin, 53, on their screens, as her last day on Wednesday September 15 is fast approaching. After almost 20 years on the programme, she will be waving goodbye to the red sofa next week.

But before she heads off to pasture new, she enjoyed a fun-filled leaving do with her BBC colleagues yesterday.

Along with members of the cast and crew, everyone gathered to bid an emotional farewell to Louise as they watched footage of her best moments on-screen.

Taking to Instagram, the 53-year-old shared a snap of her outside her enlarged Media City’s presenter poster, where she posed alongside her co-stars Dan Walker, Naga Munchetty, Charlie Stayt, Carol Kirkwood and Steph McGovern – who left the show two years ago.

She penned: “Not many early mornings left until I leave my wonderful friends and colleagues at #BBCBreakfast.

“And for old times’ sake I had to stand and have a picture all made up and ready before my early leaving party!”

Fans rushed to the comments section to share their misery that she would soon be leaving them.

One wrote: “You will be missed so much my mornings will never be the same. Good luck in everything you do.”

“Fingers crossed you won’t be a stranger on our screens at other times of the day in the months and years ahead Louise,” another said.

A third agreed: “You will be missed. You and Dan are the A team.”

A fifth wished her luck: “Good luck – Breakfast won’t be the same!”

Louise announced she would be quitting BBC Breakfast earlier this year in an emotional on-air statement.

Her former co-star Steph, took to social media to wish her luck in the “next chapter” of her life, as she attended her swanky leaving do.

The 39-year-old shared a short boomerang video which captured Louise making a speech at her leaving do, surrounded by her colleagues.

“Lovely to see everyone at Lou’s leaving do,” Steph wrote on Twitter, in view of her 414,500 followers.

“A reminder of all the fun we had on @BBCBreakfast.

“On to the next chapter @louiseminchin which I’m sure will be something adventurous and you’ll smash it like you always do.

“Good luck and thanks for everything honey #TVfamily,” she added.

BBC Breakfast airs weekdays at 6am on BBC One.