Home » Entertainment » The National Was Stalled. Two Outsiders Got the Band Moving Again. The National Was Stalled. Two Outsiders Got the Band Moving Again.

The National is a band of five men, but on a May afternoon, they were 13 men and women. Onstage at the Ed Sullivan Theater in midtown Manhattan, they rehearsed for “The Late Show With Stephen Colbert” bundled in wool caps and scarves to brace against the theater’s Arctic air conditioning. After running through a stammering new song about emotional paralysis, “You Had Your Soul With You,” the musicians requested some tweaks.

The guitarist Bryce Dessner asked for more drums in his monitors. A violinist wanted more piano. And the singer Matt Berninger had a lead singer’s frequent request: “Can I get a little more of myself?”

Frontmen are often bigger than their voices, and Berninger, a headstrong, charming former graphic designer and creative director who vibrates with ideas and similes, is a confessed egotist. But on a new album, “I Am Easy to Find,” and a 26-minute black-and-white film of the same name soundtracked by the group, the five bring in other musicians, to see how much Berninger they can remove and still be the National. The shift was prodded by two non-musician collaborators: the movie director Mike Mills, and Berninger’s wife, Carin Besser.

A band is a tribe, and the members of this one — Berninger, the brothers Aaron and Bryce Dessner, who play guitar, and the brothers Scott and Bryan Devendorf, on bass and drums — grew up around one another outside Cincinnati. They all gravitated to New York for college, internships and jobs, formed the National in 1999, and slowly became a band closely identified with Brooklyn bohemianism and neurotic self-awareness and despair — writing songs for people who, despite their privilege and education, don’t feel safe. Their previous LP, “Sleep Well Beast,” was one of the best-reviewed records of 2017 and won them a Grammy for best alternative album.

The new album’s transformation began innocuously: In August 2017, Mills, who directed the acclaimed Annette Bening film “20th Century Women,” emailed the band’s management and suggested he direct a video for them. Then, as so often with the National, things got complicated.

The band wasn’t in the mood to start a new album, Berninger said as he sat next to his wife in a hotel lobby shortly after their Colbert rehearsal. They’d done a lot of touring. All five are in their 40s; each is married and is a father. And the members don’t always get along, as they acknowledge — Aaron Dessner and Berninger, in particular. They call their dynamic “dysfunctional democracy,” and even named a 2007 album “Boxer,” at Besser’s suggestion, because they were fighting so often.

Bryce Dessner confirmed the group “was exhausted,” in an interview with his brother Aaron, as each sat in matching hotel room armchairs. They’re identical twins — Bryce has curlier hair and a little more gray in his beard. Aaron writes most of the band’s music, sometimes with Bryce. The arrival of Mills, Bryce explained, was “a sort of serendipity.”

“Mike has a positive, disarming, optimistic disposition,” Aaron said, in a way that suggested those qualities aren’t abundant in the band.

The National was ready to take a sabbatical. Maybe the group would have fallen apart — they all have side bands, and Aaron is an in-demand producer. But Berninger sent Mills 15 fragments of songs, some with full lyrics, some as vague as a white door. When Mills got excited, the band did too. (He is credited as a producer on the album.)

Instead of making a video, Mills wrote a screenplay about the life span of a woman, and cast Alicia Vikander (“The Danish Girl”) in the role. When the band saw a rough cut of Mills’s spare, troubling movie, they had a set of new song ideas. 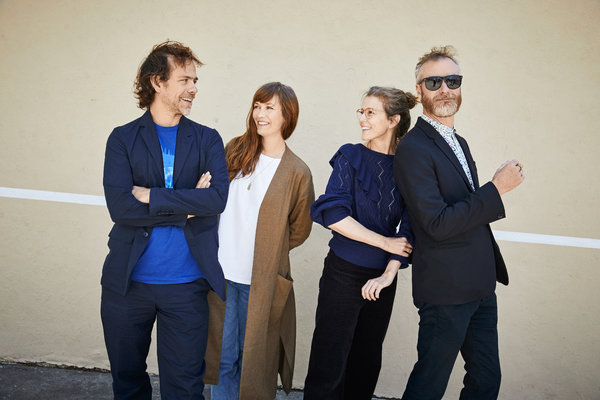 They also realized that because of Berninger’s leathery baritone, the music didn’t fit the film. “If we’re telling the story of a woman’s life, wouldn’t it be interesting to hear a woman sing?” Bryce asked. So they brought in several female vocalists, including Sharon Van Etten, David Bowie’s band member Gail Ann Dorsey, and Bryce’s wife, Pauline de Lassus. They didn’t place these women in a stereotypical role as harmony singers — at times, they supplant Berninger at a song’s center.

This was a big change in style, and Aaron began to worry whether Berninger was O.K. with it. He texted the singer: “Matt, do you think there’s enough of you in the songs?” Berninger replied, “I’ve heard enough of myself.”

Over the months, as Aaron and Bryce kept sending more new music to Berninger, the singer burned out. “I was trying to zero in on lyrics, but I couldn’t,” he explained. “And Carin picked up the baton.”

Carin Besser, a writer and former fiction editor at The New Yorker, has no musical training. When they moved in together, Besser said, “This sort of giant microphone also moved in to the middle of the living room. He was either touring or working all the time, so I found a way to make that interesting for me, too.” Berninger first used some of her lyrics on “Boxer.” “But it always felt more like I was a prep chef or something,” she said.

She and Berninger often wrote side by side at night, and Besser would sneak into his notebooks when he wasn’t around. “I’d write down my lines, and sort of triple-star them and underline them, just ideas and options for him to try.”

As any “This Is Spinal Tap” fan knows, wives who take a creative role in a husband’s band are generally met with derision. Years ago, Berninger gave his wife a nickname: Yoko, after Yoko Ono, whose ideas about Beatles songs were not always warmly received by the rest of the band. “It’s a huge compliment,” Besser said.

The pair, married since 2007, have a teasing, jibing relationship, almost like a comedy duo.

“In a bar,” Berninger piped in, delivering the punch line.

It was 2003, and each was day drinking with a friend at Boat, a bar in Carroll Gardens. They were the only four customers. He asked Besser and her friend to join them for a drink. She declined. An hour later, when the bar had filled up, he asked again (“Are you coming over, or what?” he recalled saying), and this time Besser joined them.

Instead of working late at night, Berninger now wakes up before dawn, drinks tea, smokes weed and writes lyrics. On “I Am Easy to Find,” the band’s eighth album, he tried to move away from its customary mood, which he referred to as “that depressed, bitter, sludgy, angsty, drunk, tired thing.” His lyrics, which are sometimes darkly hilarious, still mull the ways in which relationships yield disappointment. “If you wanna be alone, come with me,” he sings in “Rylan,” a fan favorite.

While similar “depressed, bitter” predecessors, like Sparklehorse or Sun Kil Moon, never filled basketball arenas, the National has, oddly, become one of the biggest bands in rock.

Bryce Dessner said the R.E.M. singer Michael Stipe once gave the National a bit of weary counsel: A band, he said, either needs lots of hits, or none. “So we went with the none,” Bryce said with a smile.

Bryce writes modern classical music, has two degrees from Yale, and founded a festival for avant-garde music. The brothers share “an opposition to bombastic rock tropes,” Aaron said. “We prefer to play off each other in mirrored patterns and cross rhythms.” Reaching from Minimalist tradition, their guitar riffs coil, claw and recur, rarely offering catharsis or resolution. The songs end where they began. If you were writing a business plan for a big rock band, you wouldn’t base it on mirrored patterns and cross rhythms.

“You go into the Gap,” Berninger said with a laugh, “and you’ll hear a bunch of songs that sound bright and connect right away. You can hear the melody in the dressing room. And then all of a sudden, you’ll hear this mumbled, murky sound — and I’m like, ‘Oh. That’s one of our songs.’

“Our music is far more popular than we ever thought it would be,” he added. “Oddball stuff does creep through sometimes: R.E.M., Tom Waits or Nick Cave.”

For years, the National trailed behind cooler New York bands: the Strokes, Interpol, TV on the Radio. If they hadn’t sold a song to a car company in 2006, they probably would have been too broke to go on, Berninger said. Aaron likens the band to a tortoise — they’ve taken a slow path, inch by inch, despairing thought by despairing thought.

Besser, whom the band turns to for conceptual clarity (her other nickname is the Oracle), has been changed by changing the National. She’s eager to do more songwriting, even with bands her husband is not in. “I’ve got the fever,” she admitted.

Berninger sat up straight and blinked. “You do?” he said. “What’s the name of your solo album going to be?” 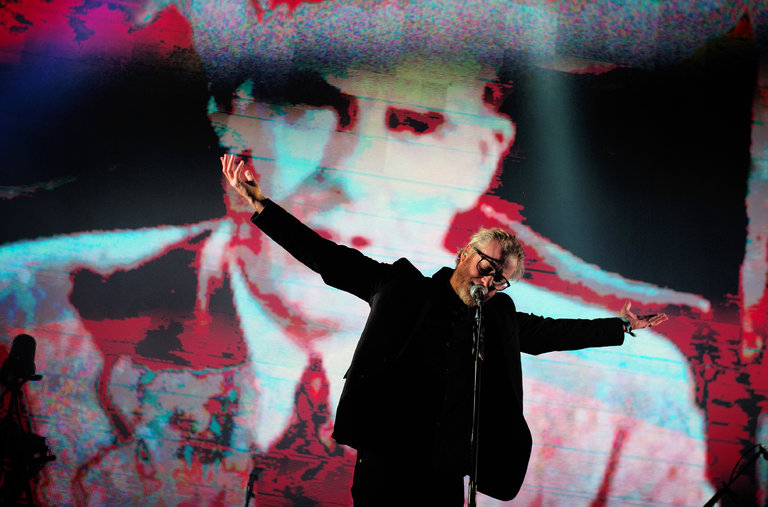 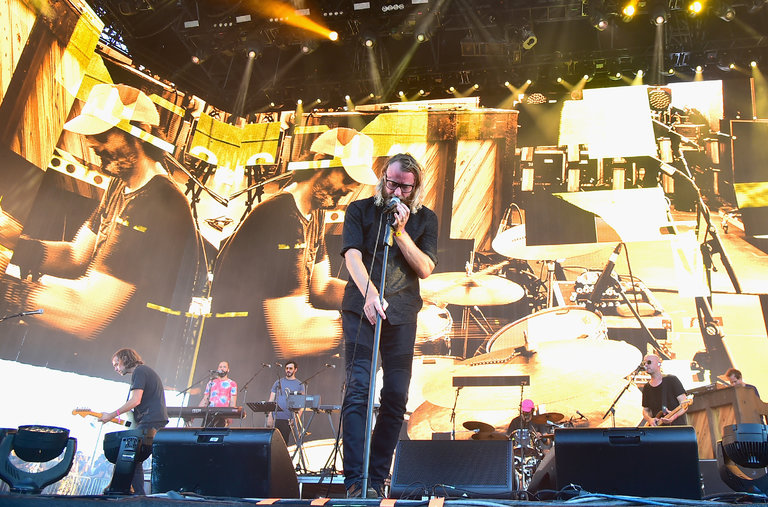 Cardi B set for own TV show ‘Bocktails with Cardi B’