Home » Entertainment » My Screens Are Filled with Black Death, but I Won’t Look Away My Screens Are Filled with Black Death, but I Won’t Look Away

This essay includes spoilers from the current season of “The Boys.”

The most recent episode of Amazon’s superhero spoof “The Boys” opens with a gun-toting white man killing a South Asian storekeeper while hateful rhetoric about dangerous illegal immigrants runs through his head. Later at a public rally, two heroes decry “godless, inhuman supervillains” who are “pouring across our borders” while standing in front of a giant American flag.

And to think that when I watched the episode screener recently, I had turned to it for a break from news stories about senseless murders of people of color and the poisonous, racist discourse that’s become the norm in my supposedly great country. But this season of the series delivers more of the same: I was asked to watch more Black men die.

The show’s fictional renderings of Black deaths pale in comparison to the real tragedies they mirror. But I found their effect to be similarly distressing, and the presentations of both raise ethical questions about how we convey the horrors of America. When is this documenting of wrongs, as art or as journalism, a worthwhile public service intended to awaken people to what’s happening in their country? And when is it simply exploiting tragedy for the sake of spectacle?

Adapted from Garth Ennis’s notoriously graphic comic book of the same name, “The Boys” has never been light viewing. But it has a dark sense of humor, and the explicit violence has a point, as part of a larger critique of capitalism, consumerism, jingoism and the American obsession with celebrity. In the show’s alternative version of the world, superheroes are everywhere, and the best — an adored group called the Seven — are backed by an evil corporation, Vought International.

But unbeknown to their fans, the corrupt crusaders would rather pursue their own hedonistic, and often criminal, interests than save the day. A group of literal antiheroes, the Boys, work to get back at the “supes,” in the show’s parlance, for their misdeeds and keep them in line. 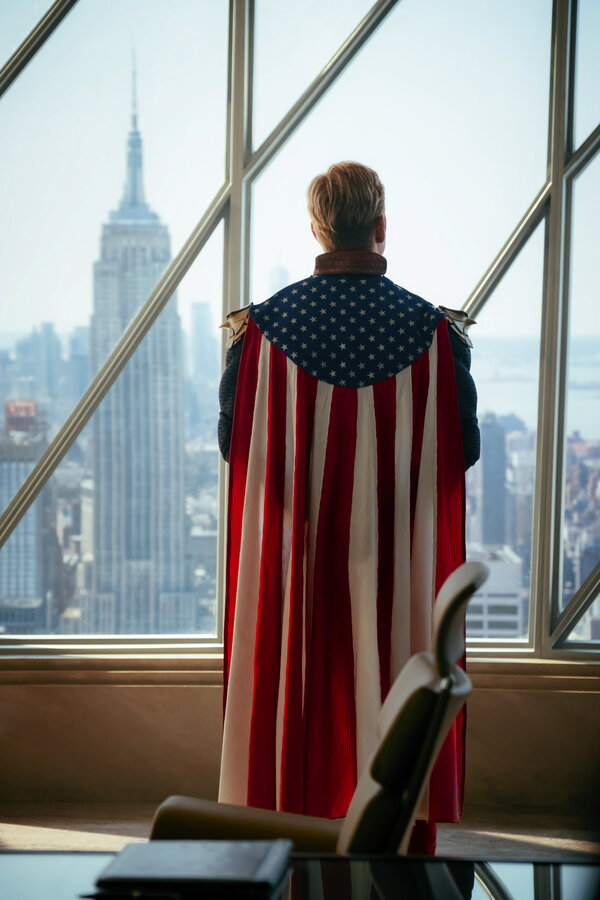 The second season narrows its gaze to focus on a timely topic: the power of hateful, fear-mongering political rhetoric. To that end, the show introduces a brand-new member of the Seven: Stormfront, an ageless wonder, played by Aya Cash, who we discover fought previously under the nom de guerre Liberty and was a member of the Nazi elite during World War II.

The Stormfront of the comic is a savage Nazi man in a cape, a fierce, powerful hero who openly terrorizes people of color. The series switches the gender and makes the unveiling of her villainy more subtle: She is a white feminist who challenges sexist double standards but then mobilizes her fans, first via social media and then at raucous rallies, manipulating people’s fears to her advantage. Her bigotry is revealed gradually, but as we see in flashbacks from when she was Liberty, it runs deep.

In one triggering scene set in the ’70s, Liberty stops a Black man and his younger sister as they’re driving along at night. The superhero cites a car robbery, though the man insists the car is his. Nevertheless, Liberty kills the man as his sister watches.

In the present day, as Stormfront, she chases a superpowered character into an apartment complex full of Black families, thoughtlessly killing bystanders along the way. She flings a Black man against his own refrigerator and he dies in his home, and it’s implied that the rest of his family does, too. She tosses another out of a window as if he were a piece of trash. When she reaches her target, an Asian man, she kills him slowly, cruelly, spitting out a racial epithet as she does. Later, at a rally, we see her proclaiming the need to “Keep America safe again,” in an explicit callback to our president’s favorite catchphrase.

Then there’s that opening scene of the episode released on Friday, when a random white Stormfront fan, infected by her rabble-rousing racism, shoots the man at his own convenience store, afraid that he is one of the immigrant superterrorists he has been warned about.

This scene and others like it this season are more vicious and urgent in their satire than what we’ve generally seen from “The Boys,” which primarily parodied celebrity culture and comic book clichés in Season 1. These calls are coming from inside the house.

At least they feel that way to me, as a Black viewer. From its first episode, “The Boys” has proved that it won’t shrink away from garish displays of blood and dismembering and otherwise gratuitous content, from its depictions of sexual assault to its alternative version of 9/11. In terms of pure violence, the scenes leading up to the revelation that Stormfront is the racist Liberty are generally in line with the show’s more wanton action. But they build to something worthwhile, illuminating how hate can disguise itself, how it can be weaponized, how it can be inextricably woven into the fabric of a nation.

And yet in setting its gaze on the battered face of the Black man killed in front of his little sister — a clear visual reference to the image of the brutalized Emmett Till — the show dips into a dangerous sensationalizing of these tragedies. It borrows from our traumatized cultural memory and experience — slavery, lynching and Jim Crow abuses of the past; police brutality that continues into the present — and thus reproduces real pain. Whatever its intention, this gruesome rendering forces Black viewers, like me, to stare at the broken face of someone who looks like them.

In that way, it’s not much different from the videos we see constantly on news sites and telecasts and social media. Of Jacob Blake, shot and left paralyzed in Kenosha, Wis., in late August. Of George Floyd, who died with his head pressed to the ground, pinned beneath the knee of a police officer, in late May. Of all the Black people we’ve seen before and since.

That night I watched “The Boys,” I also watched an NBC News collection from 2016 that packaged multiple police brutality videos together. One ran into another into another as I squinted at the screen, trying to make out what was happening in the muffled exchanges between blurry bodies. I felt a low, constant sense of suspense — not the electric feeling of anticipating the drop of a roller coaster but the more everyday anxiety of, say, watching a pot on the stove, hoping your roiling, bubbling sauce won’t spill over. The almost banal sense of fear that comes with being Black in America.

Watching “The Boys” put me on edge, but to some extent I could shake off the anxiety. The acting, the camerawork, the artistic sheen of the series rendered these Black deaths visually indelible, but those elements also signaled the artifice of those scenes. I can still conjure them clearly in my mind, in part because of the cinematic choreography that went into creating a more stylized version of reality.

My reaction to the videos of Black deaths, however, was the inverse; I don’t remember the specifics of the scenes, but the sinking feeling remains. There was the subtle kick of adrenaline that quickened the tempo of my heart and set the engine of my imagination going, churning out scenarios in which I was stopped in the street or shot in my home. I considered my overwhelmingly white Brooklyn neighborhood and tried to recall how many Black people I had seen that day, wondering if they at any point felt targeted, if they were also sitting fearful and panicked in their homes.

And yet we’re so quick to share these videos and to comment. The media is quick to replay the murders in the interest of documenting the news. They appear on TV and they autoplay in news articles and social media feeds, accompanied by an obligatory trigger warning, as though that excused what is sometimes a mere commodification of horror. In pursuing a salient truth about our nation, there is danger of reducing these videos into spectacles: performances, strung together, divorced from the concrete reality of the situation.

There is by now so much footage of Black deaths, so many videos, that the details have become blurry to me. Who reached for something? Who had hands in their pockets? Who gestured? Who slowly stepped forward? Who raised their arms into the air? The particulars are inconsequential — or dangerous to the extent that they’re used to explain away brutality, as though the victims were somehow at fault in their own executions. And yet they remind us that these were specific people killed within specific circumstances, not just names on a list or symbols of a movement. We call out, “Say their names,” but doing so can become more reflexive than reflective.

Having watched deaths both fictional and real that night, I was exhausted, no longer sure which were exposing a continuing national tragedy and which were exploiting it. That line is hazy and shifts from person to person, and perhaps from night to night.

But I’ll keep watching. Occasionally we need to pay the price of our contentment, with fiction that expands our understanding of racial injustice in America and with the firsthand videos that bear witness to it. Both may miss the mark at times, when they fail to consider the dignity of the victims as carefully as they do their own narratives or ratings. But we can’t afford to look away.