Before the coronavirus slammed the brakes on live music this spring, New York jazz fans had recently grown accustomed to a new thrill: If you went out enough, you would inevitably walk into a club and find the vibraphonist Joel Ross onstage, playing in yet another musician’s band.

Studious and self-assured, with a casually debonair style and a warm but faraway air, the Chicago-born Mr. Ross, 25, became ubiquitous on the scene over the last few years without forcing himself in, by virtue of his rhythmic distinction and his adaptive spirit. He now works regularly with leading bandleaders about a decade his senior — Marquis Hill, Makaya McCraven, Kassa Overall — and last year Blue Note Records released a head-turning debut album, “KingMaker,” featuring his quintet, Good Vibes.

But Mr. Ross and the band had recorded that music years before the label picked it up, and by the time it came out in spring 2019, it felt like a relic. As soon as the band could, it headed back into the studio to capture the 15 tracks that would become their second LP, “Who Are You?,” due Friday.

Featuring originals by Mr. Ross and his bandmates, as well as a few pieces by musicians who have influenced him, it speaks to a new level of group cohesion. And for Mr. Ross, that’s everything: It means more tangle, more sharing, more possibility.

Particularly on his own compositions, Mr. Ross and the band treat rhythm as both fundamental and unfixed, while dousing the music in harmonies derived from modern gospel. “I want the possibilities to remain open — so rhythmically, not being in a set groove or just playing the pulse,” Mr. Ross said in a phone interview from his Brooklyn home. In Good Vibes, he added, “We’re talking to each other with different forms of rhythm.” 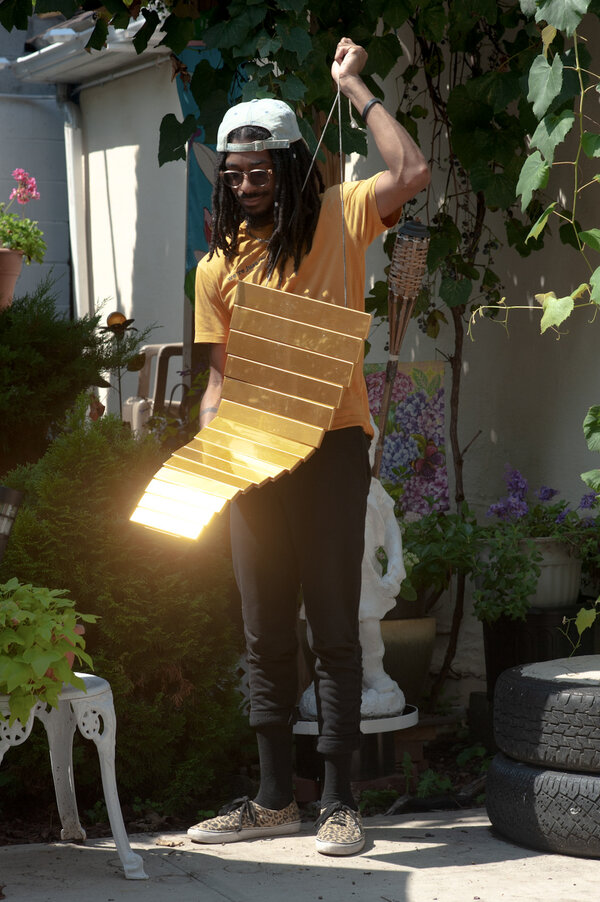 Mutual listening is the band’s currency. “Understanding who’s doing what,” he said, allows each player to find their own role.

Each generation, young jazz musicians set about to reshape their inheritance, defining how the music’s main values can coexist in their historical moment. Like Roy Hargrove, Cassandra Wilson or Jason Moran a couple of decades earlier, Mr. Ross is an upstart reasserting how scholarly group improvisation, rooted in spiritual intent, might feel fresh — even provocative.

The years Mr. Ross spent in childhood learning drums at church laid an important foundation. “It tends to be what I’m reaching for,” he said, “to put the audience into that space of reaching up, worship and praise.”

Another crucial lesson came from listening to the Miles Davis Quintet of the mid-1960s, one of the first bands to truly destabilize rhythm in a post-bop context. He heard what seemed like two-way conversations happening constantly between all the band members — even as the full band steamed ahead. “I focused on what each individual did, and then I would focus on pairs,” he said. “It’s a skill that I’ve purposely tried to develop: being able to listen to everybody and respond naturally. Not just mimicking, but to really develop conversations with everyone.”

The harpist Brandee Younger, 37, who appears as a guest on “Who Are You?,” has built a close musical bond with Mr. Ross in part because they both play uncommon instruments. For each of them, figuring out how to fit into a band’s sound requires extra-careful listening. She has noticed that he knows how to make room for her better than most musicians. “He’s not covering me up, but complementing me,” she explained. “It’s a very selfless, serving-the-music thing.”

Before joining Good Vibes in the studio, she suggested that Mr. Ross take a harp lesson to better understand how the instrument works. She was surprised when he actually did it. “He absolutely is about putting the work in to understand,” she said.

Mr. Ross lets that ethic inform how he guides each of his bands — not just Good Vibes, but also his quartet and the eight-piece Parables, which he sees as his next major creative focus.

The group has a big and baggy approach, inspired partly by Ornette Coleman’s “Science Fiction” recordings, and an explicitly spiritual design. For the band’s last performance before quarantine, at Roulette in Brooklyn, Mr. Ross composed an extended piece using excerpts from improvisations he had recorded with the saxophonist Sergio Tabanico. The melodies he teased out became like mantras or hymns, to be passed between the voices of the ensemble.

“The rhythm section, our role was really to hold it down, and the horns were treated like the singers,” Mr. Ross said, likening the performance to a church service. “There was written material, but a lot of it was open to them,” he added. “It was a lot of following the person with the ‘mic.’”

Mr. Ross was born in Chicago in 1995 and raised on the South Side by his parents, both police officers. They were active in their local Baptist church, where his father led the choir. Joel grew up learning the drums alongside his twin brother, Josh, at the knee of their godfather, switching to the vibraphone only reluctantly after Josh snagged the drum chair in their middle school band.

The brothers were among the first students admitted to the Chicago High School for the Arts in 2009, that magnet school’s inaugural year. From there, Mr. Ross went on to study at the Brubeck Institute in California, where he learned from the vibraphonist Stefon Harris and connected with the trumpeter Ambrose Akinmusire and the pianist Gerald Clayton, who became mentors. (He attended the New School in the mid-2010s, then dropped out after his touring schedule became too demanding. During quarantine he has attended virtual classes, in pursuit of his degree.)

All the while, Mr. Ross was working out a style of playing focused on clarity, and heavily influenced by the classic vibraphonist Milt Jackson. He decided to stick to using two mallets, like Jackson — not four, like most contemporary vibes virtuosos. “The more notes you have, the more you’re dictating the harmony, and I don’t want to do that,” he said.

Careful not to pedal too heavily, keeping each glowing note distinct and unblurred, he taught himself to caper between babbling melodic runs and generous intervals of space, toggling the pressure. Just as Jackson defined his own brand of swing — a gallant lope that added swagger to the well-ordered constructions of the Modern Jazz Quartet — Mr. Ross has worked hard to establish a rhythmic stamp that bespeaks his personality and his moment.

“Joel has been, in an almost scientific way, getting down to the DNA: what swing is, what swing means to him in 2020,” said the saxophonist Immanuel Wilkins, a member of Good Vibes and one of Mr. Ross’s closest collaborators.

“We’ll be listening to artists now, and he’ll be like, ‘Yo, that’s it! That’s what swing means in 2020,’” Mr. Wilkins continued. “It’s been interesting to have those conversations with him, because it’s always been about actually touching the tradition and having a physical relationship with it.”

For Mr. Ross, swing today ought to be elastic and springy, light of foot but well balanced on the ground. When he’s aiming for the gut, it can get deeper and slower — like on “3-1-2,” the homage to Chicago that closes “Who Are You?,” with the drummer Jeremy Dutton’s three-over-four swing rhythm harking to Elvin Jones and to the very roots of jazz.

“I don’t like backbeats,” Mr. Ross said, arguing that when drummers today lean too hard on the boom-bap thwack of classic hip-hop, it can become restrictive. He wants more room for invention and fluidity.

“I tell Dutton on every gig, don’t play on 2 and 4,” Mr. Ross said. Then he thought about it a moment, wondering if by insisting on openness, he was verging toward dogma. “Truthfully I don’t care what he does,” he added, as a caveat. “I don’t want to be closed off to anything.”

Articles in this series examine jazz musicians who are helping reshape the art form, often beyond the glare of the spotlight.