Home » Entertainment » ‘Blood Meal’ Review: Just Us, Locked Down in a Dollhouse 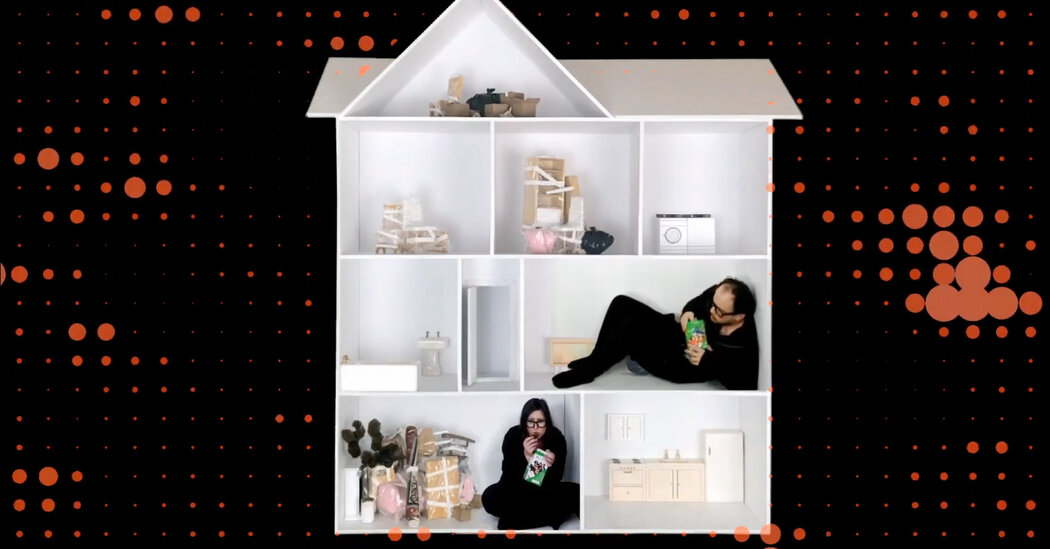 ‘Blood Meal’ Review: Just Us, Locked Down in a Dollhouse

The bugs have made Sam and Lindsay prisoners of their own home. To battle the invasion, the couple live in bare rooms, the furniture wrapped in plastic. They don’t leave the house and don’t welcome anybody in, either: They refuse entry to Girl Scouts selling cookies and after drinks with friends on the porch — in the middle of winter — they throw their clothes in garbage bags.

Any resemblance to a certain pandemic is entirely not coincidental, and in just 32 minutes Scott R. Sheppard’s darkly funny new play, “Blood Meal,” captures our zeitgeist with satirical accuracy.

What makes the show even zeitgeistier is that it is the latest salvo from the prime purveyor of inventive stagecraft in the age of Covid: Joshua William Gelb and Katie Rose McLaughlin’s Theater in Quarantine.

For the past 10 months, the pair have turned a small closet in Gelb’s apartment into a performing space that has hosted everything from an “expressionistic musical portrait” of Mother Teresa (“I Am Sending You the Sacred Face”) to an adaptation of a Polish science-fiction story (“The 7th Voyage of Egon Tichy”). 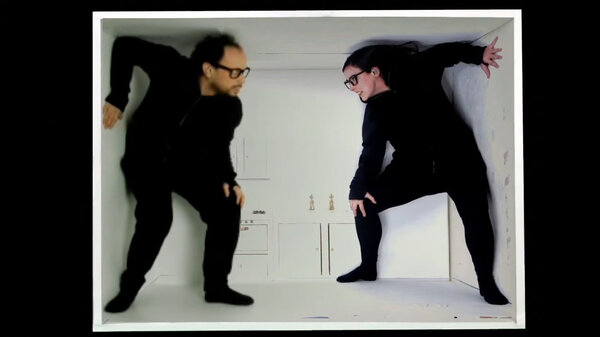 “Blood Meal” ups the ante: Gelb (who directed and plays Sam) and Lee Minora (Lindsay) are performing live from separate closets — hers was built in the basement of La MaMa. The magic of technology brings the actors together so Sam and Lindsay can have sex and share a bath. We even watch them move about a cross-section of their home, as if it were a dollhouse. (Gelb and Stivo Arnoczy did the video design; Alex Hawthorn was responsible for the software that synced the action.)

The setting itself creates a strange combination of the mundane and the surreal that perfectly suits Sheppard’s sensibility. He co-wrote the Off Off Broadway hit “Underground Railroad Game,” about children and adults re-enacting slavery scenarios, and last June contributed “Topside,” a claustrophobic, unsettling play inspired by the Donald Barthelme nuclear-cloud short-story “Game” to the growing Theater in Quarantine catalog.

The zippy “Blood Meal,” which is free on YouTube, is an even better piece than “Topside” because it so skillfully maps a familiar world where an invisible danger lurks everywhere. McLaughlin’s matching costumes for Lindsay and Sam, black with red accessories, make them look like two mimes flailing in paranoid domesticity at the end of the world.

Sam is at the end of his rope and desperately wants to believe the infestation has run its course so they can get back to normal and maybe even stop sleeping in the kitchen.

Lindsay has a more jaundiced attitude. “If we are serious about fighting these bugs, we must always doubt that we are free of them,” she tells him. “Do you understand that? It’s about doubt.”

But she starts having the wrong kind of doubt as she increasingly suspects Sam of surreptitiously meeting people outside. Her nagging suspicions and his equivocations drive a wedge in the heretofore united couple. Eventually, Sam pleads for Lindsay to join him in an escape: “Let’s get in the Jetta and take the mountain,” he pleads. “Let’s drink black Manhattans and cuddle like bobcats.”

Watching this live play on a screen, at a remove, it’s hard not to think, “Can I come too?”

Blood Meal
On the Theater in Quarantine YouTube page

Miller Lite Will Venmo You $8 on Super Bowl If You Type This Crazy Long, Calorie-Burning URL
Entertainment