This has been a good year to try new things indoors. Especially for Bruce Nauman. The controlled terrain of this artist’s studio has always been more than a work space; it’s an arena in which everything, from his body to his words to just the fact of his breathing, can gain the status of art.

As early as 1967, first on 16-millimeter film and then with one of the first consumer video cameras, Mr. Nauman documented himself bouncing balls up and down, or stamping his feet on the floor, or walking and playing the same notes repeatedly on the violin. Alone inside he zeroed in on himself with a precision, a menace and a dark humor that would characterize his whole career, and averred that the studio walls were all he needed to approach the biggest questions of creation and mortality.

Mr. Nauman is now 78. He would have every right to take it easy at his home in New Mexico or just tend to his horses after a lifetime of innovation that was summed up in a mighty retrospective two years ago at the Museum of Modern Art and MoMA PS1. (Another major retrospective has just opened at Tate Modern in London.) But he is not done with trying new things indoors, and a profound new exhibition at Sperone Westwater Gallery confirms how sedulously he is still pushing the studio’s limits. 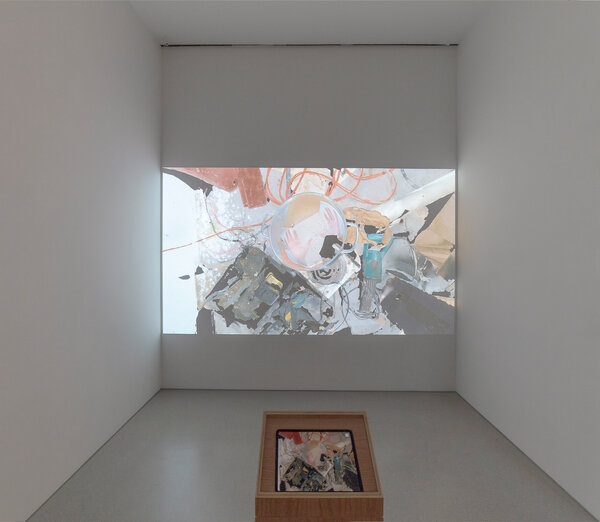 The principal surprise here is a new digital artwork, activated by an iPad touchscreen and projected at high resolution on a gallery wall, which depicts the artist’s studio in New Mexico in forensic detail. Grab a pair of COVID-obligatory rubber gloves at the front desk, and you can examine this large warehouse from every angle, spinning it around with the same familiar gestures we use every day on our germ-covered phones. You can rotate, zoom, look down from the ceiling or up from the floor, like you can with Google Earth.

The studio is a bit of a mess, frankly. With a pinch or a swipe you can see Mr. Nauman’s morning coffee on a swivel chair, step ladders, power tools, a cluttered trestle table, leftover fiberglass casts. Zoom close enough and you’ll find Easter egg-like surprises; I got a kick out of discovering a dusty old copy of a horse magazine, lying forgotten on a plastic tub. 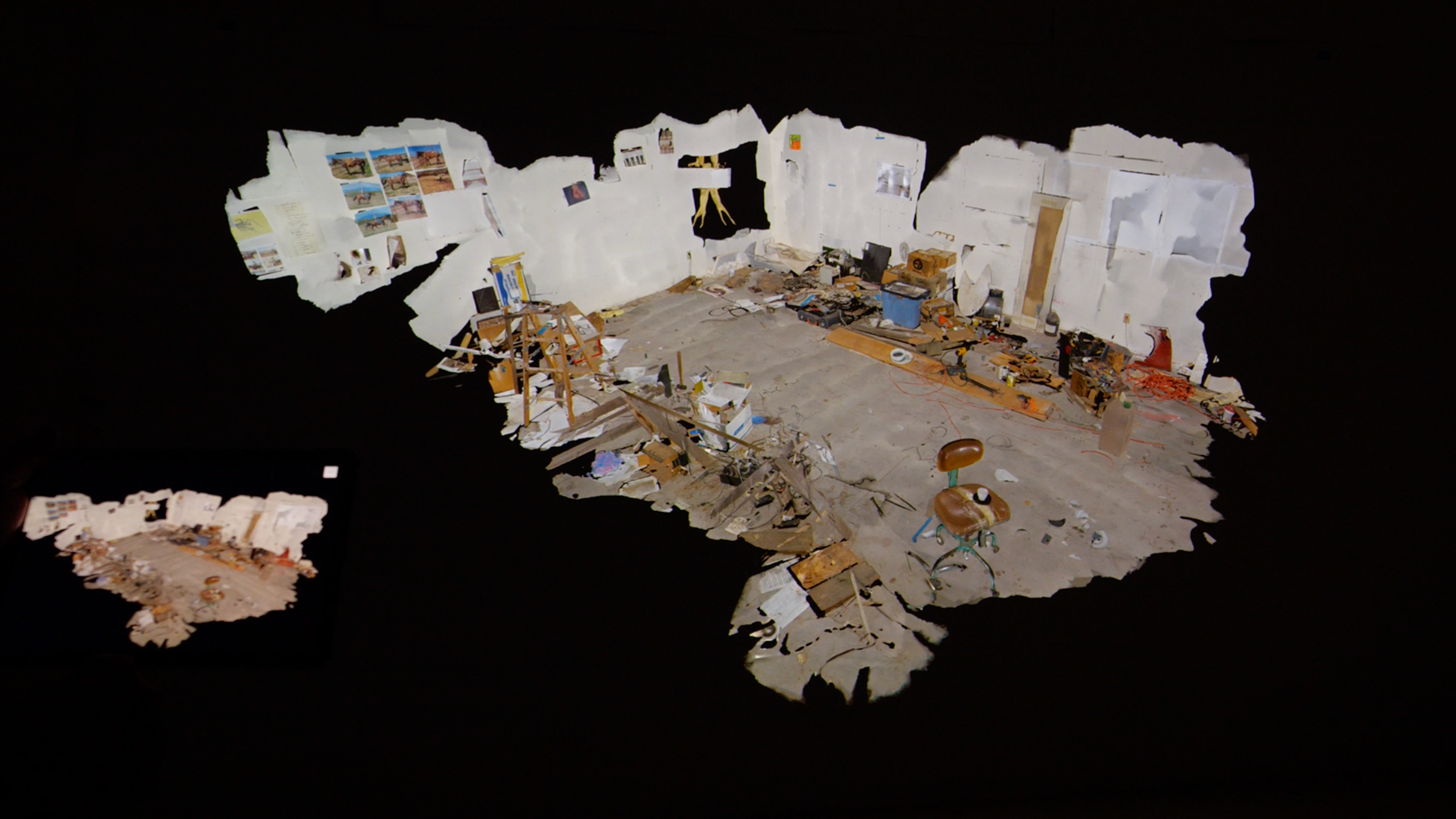 Mr. Nauman is not present — or so it seems at first — in this document of his studio, a 30-by-60 hangar of no great architectural distinction. Movement and time have been suspended, and it feels like a room embalmed. In fact, the work’s title is “Nature Morte,” which is the French term for “still life,” though its invocation of death (la mort) is hardly incidental for Mr. Nauman, who has stared down the end of life with a deadpan consistency in his sculptures, his neons and his video-documented performances. (When he was playing his violin back in the studio in 1969, he tuned the four strings to the notes D-E-A-D.)

Let me admit: I got nervous when I first heard that Mr. Nauman was making a work for the iPad. So many artists have faltered in the face of digital hucksterism, and I had initially feared that “Nature Morte” was going to be a mere Apple-formatted sequel to “Mapping the Studio” (2001), his eerie night-vision recording of his work space that filled the basement of Dia Beacon in that museum’s first years.

But “Nature Morte,” I soon learned, is as physical as it is digital. Mr. Nauman undertook the rote business of scanning himself, using a wand equipped with a 3-D camera at the business end. He had to get into every crevice of the studio, above and below and around each object, in order to translate it from matter into media. To make this rendering, the artist needed more than software. Mr. Nauman had to stretch, to crouch, to jump, to lunge, to twist, to shimmy.

Notice, as you navigate this digitized studio, how parts of the rendering appear swollen or scrunched. Some sections of wall are totally missing. Objects that should be on the ground seem to float. Spin it in the wrong direction and the walls seem to splinter and disintegrate. Those streaks and glitches are records of the artist’s motions in the studio that make visible the gap between his ideas and his actions, between the high abstractions of art and the dumb facts of his body.

So often, Mr. Nauman has translated his body into a material, into some malleable or ductile substance — casting his knee in resin and then extruding it to six feet long, or slicing his projection in pieces as he walks in an uneven contrapposto. In this iPad work, the body has now become the most fluid of substances: it’s information, it’s data for an app. Through the medium of the iPad’s touchscreen, Mr. Nauman has found a channel to fuse the body and the studio. They come together in a work that feels both like a new direction and a summation, where the artist is everywhere present and yet nowhere to be seen.

Two other works by Mr. Nauman, both also substantial, accompany “Nature Morte” at Sperone Westwater and complement its engagement with mortality and preservation. “Two Leaping Foxes” is the latest in a decades-long series of sculptures comprising polyurethane foam animal forms — the kind taxidermists use — suspended upside down to form a kind of chandelier. Two caribou hang near the ceiling, deer sit frozen in midair, and the titular jumping foxes dangle just above the floor.

And in the 3-D video “Walking a Line,” which you watch through special glasses, you finally see Mr. Nauman in the studio. He walks barefoot, as if on a tightrope. The image is bisected horizontally, and the two halves are projected a tick out of phase; his torso keeps jagging away from his legs, which calls attention to his belly dangling over the waistband of his pants. The projection appears right side up, then upside down, and though Mr. Nauman struggles to keep balance, his expression never wavers. 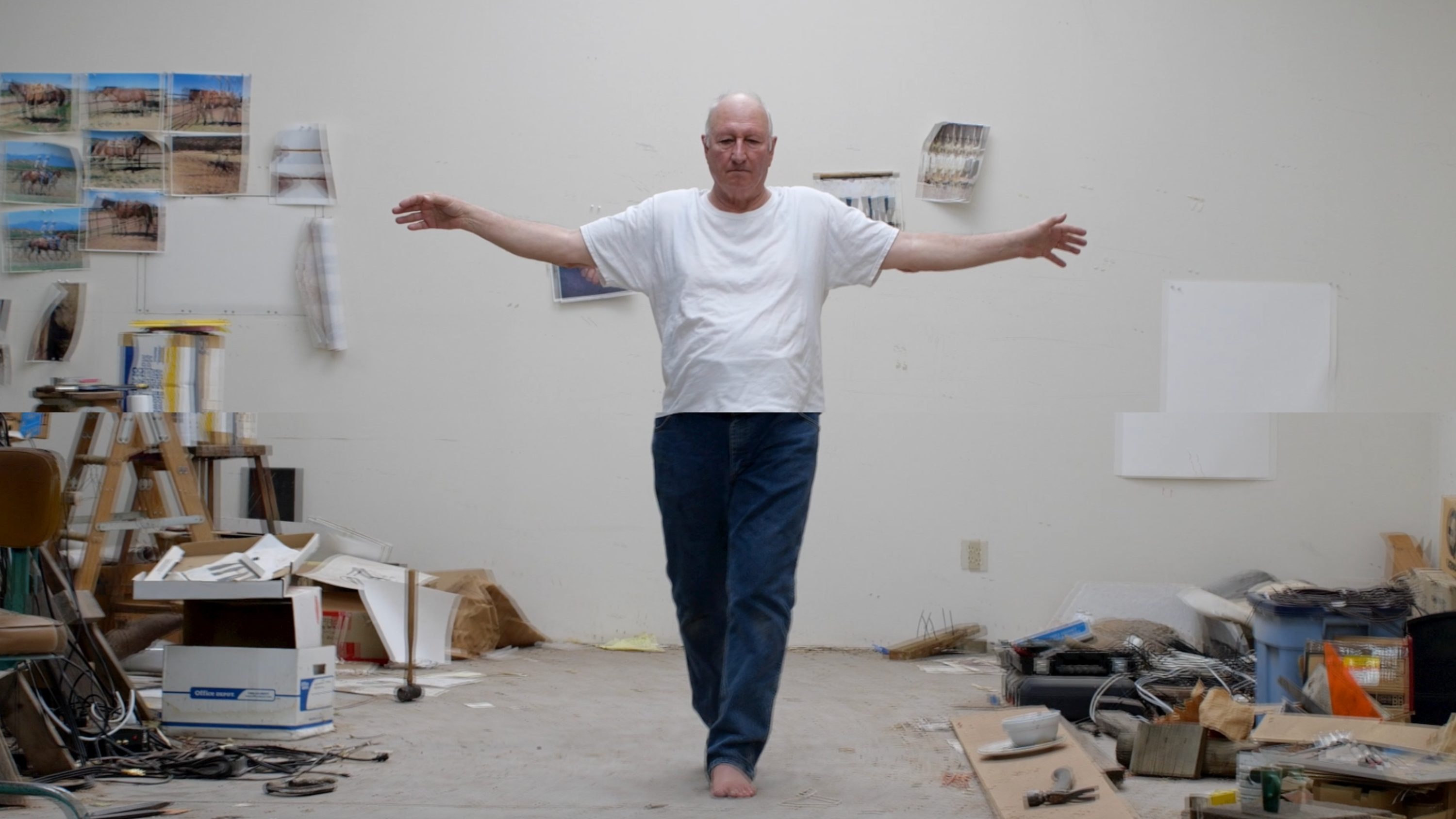 My mind flashed, as I watched Mr. Nauman walk this invisible line, to a passage from Kafka, another artist who pushed bodies to extremes. Here is the first line of Kafka’s “Zürau Aphorisms,” written at the height of World War I: “The true path is along a rope, not a rope suspended way up in the air, but rather only just over the ground. It seems more like a tripwire than a tightrope.” And this is the rope that Mr. Nauman has balanced upon for half a century: an obstacle that seems stupidly simple but turns out to be grandly challenging. It requires the keenest acumen to stay standing, even when your movements seem silly or hopeless.

Mr. Nauman began all the works here before the death this May of his wife, the painter Susan Rothenberg. The fact of her passing gives these isolated artworks a greater desolation, as though the nakedness of the splayed-out studio and the unsentimentality of the aging body constituted acts of mourning. But all of us, since March, have had to learn to keep going when we end up alone. Inside our own four walls we can see death, but to let art in is a commitment to new life.

Joules Black Friday Sale 2020: What To Expect| The Sun UK