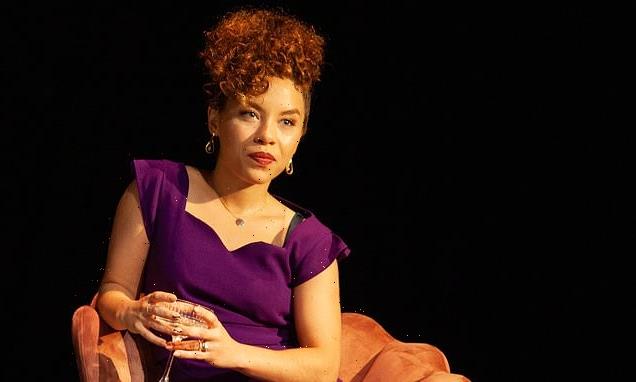 Without wishing to give too much away… be careful who you take to Leopards at Kingston’s Rose Theatre.

Alys Metcalf’s tale of a young woman who entraps an older man in a compromising situation in a hotel bedroom could feel a little bit awkward in the wrong company.

Friends and spouses, OK. Colleagues and family… not so much.

Having said that, Leopards is a relatively conventional drama, in which Saffron Coomber plays 28-year-old Niala, a tourism PR who arranges a business meeting with 50-something Ben, the CEO of an environmental charity, played by Martin Marquez (best known from TV’s Hotel Babylon). 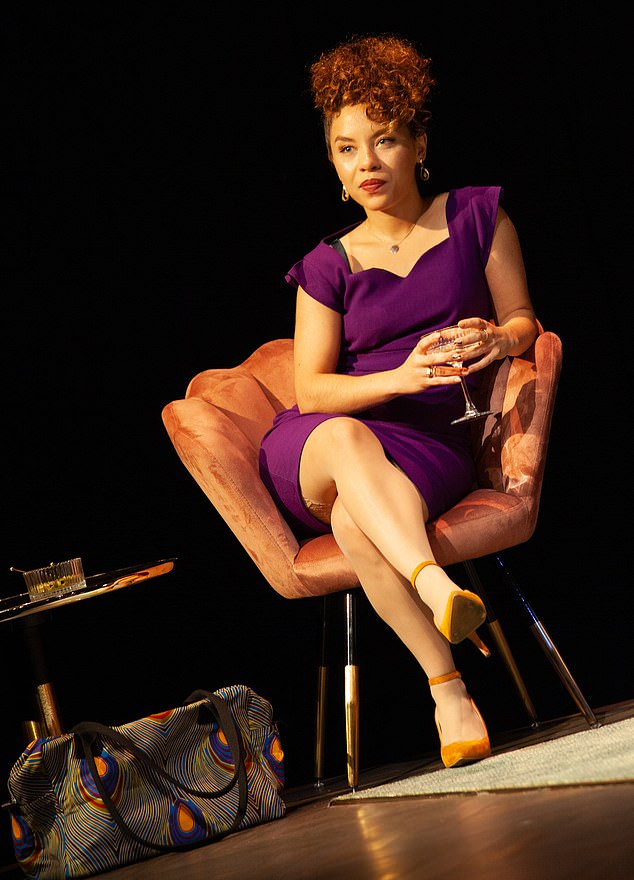 The pair spend a little too long circling each other in the lobby during the opening half hour, but the story does finally crackle with sexual tension when she candidly puts him on the spot: does he want to take this upstairs?

Much is owed to David Mamet here; in particular his play Oleanna, about a college professor and his aggrieved student.

As expected, Niala has an agenda: she is seeking revenge. But Metcalf’s play has an agenda, too; which is to ask if there can be ‘carbon offsetting for morals’. This opaque and clumsy formulation is better known as ‘atonement’.

Unlike Mamet, who prefers to have his characters destroy each other, as they do in Greek tragedy, Metcalf’s drama is too one-sided. Instead of allowing Ben to defend himself with solid arguments, Metcalf makes him merely well-meaning and conciliatory.

And as well as being righteous, Niala needs to be more challenged. 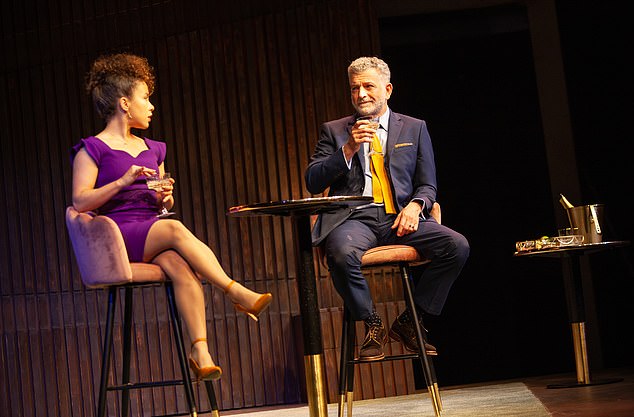 Even so, there are sufficient twists to keep us moderately uncomfortable — and Coomber and Marquez give absorbing performances.

She negotiates her vengefulness with care; and he picks his way through his past with contrition.

Thunder, and a piano bar heard off, add portent (and kitsch) to Christopher Haydon’s neat production. And the sterility of corporate culture is distilled in a brown hotel room where a giant bed serves as both High Court bench and sacrificial altar.

What it really needs, though, is a properly bloody ending.

Overloading her palette, writer Winsome Pinnock meditates on Turner’s painting, tells the tragic story of one of his free black contemporaries, includes a teacher introducing pupils to Turner’s art, and frames it from the perspective of a black actress making a film about atrocities on slave ships — specifically the notorious massacre on the Zong in 1781. 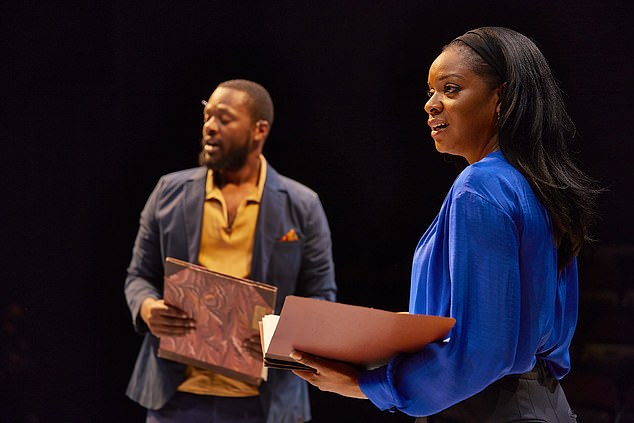 Any of these storylines might have commanded a play of its own; and Pinnock’s two-and-a-half hour drama can feel like a portfolio of sketches of characters past and present.

But the most interesting character is the seamy Cockney Turner, played by Paul Bradley as a wily old crank.

Kiza Deen as the heroine actor is more of a cipher as she re-lives the slave victims’ suffering, and connects it with insidious discrimination today. 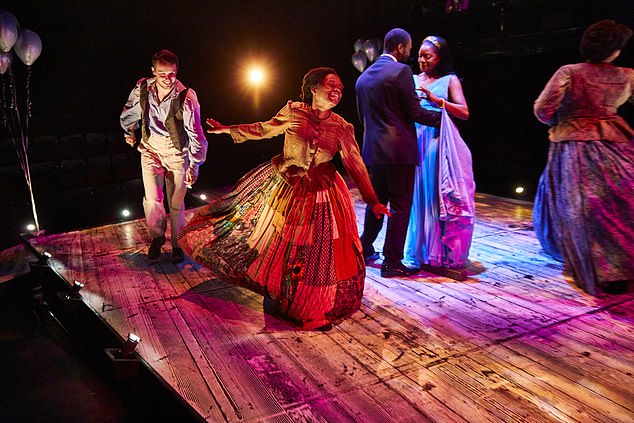 Laura Hopkins’ design brings the strands together with a staging that features the deck of a ship, a pool of sea water and twisted black furniture made to look like Turner’s charcoal squiggles.

Miranda Cromwell’s production also features a soulful mix of blues guitar, jazz saxophone and African drums. Otherwise, it only really begins to scratch the surface of a grim and shameful subject.

Long-suffering daughter who dreams of being a wild rover

A quarter of a century ago, Martin McDonagh’s debut play about a monstrous, manipulative old woman who sabotages the chances of her virgin spinster daughter in order to keep her as her skivvy, revealed an assured talent for mordantly black humour. He could turn squeals of laughter into horror in a split second.

Even if you know what is going to happen — and McDonagh fearlessly plants clues and lunges into melodrama — Rachel O’Riordan’s poignant, pungent revival proves the play has lost none of its power to shock.

Indeed, in a week when social care is under scrutiny, it seems that little has changed for the likes of Maureen, virtually imprisoned in a godforsaken cottage in the Connemara mountains, tethered to her vindictive old mother, Mag. 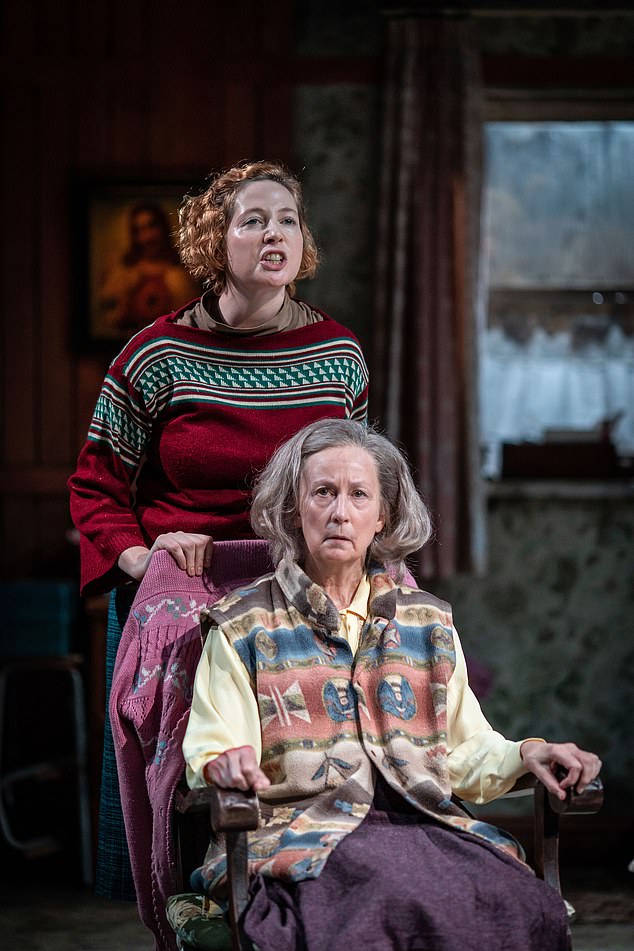 Locked in: Orla Fitzgerald and Ingrid Craigie in The Beauty Queen of Leenane

Leenane is the kind of place where ‘you can’t kick a cow . . . without some bastard holding a grudge for 20 years’. Repression indoors, oppression outdoors. Everyone wants out.

The set is not as suffocating or squalid as it might be, in spite of the stained wallpaper, glowering skies rearing up behind and the sound of rain falling like pebbles. But there is no doubting the stink of infected urine which Ingrid Craigie’s somewhat underpowered sly, malign Mag defiantly empties from her potty into the kitchen sink.

Rooted in her rocking chair, from which she issues orders for tea and porridge, pulling strings without budging an inch; the moment she is alone she leaps up, burning an invitation, then a letter, determinedly destroying hopes and lives.

For hope arrives in the shape of a neighbour, Pato Dooley (Adam Best has real sweetness, awkwardness and artlessness), home from navvying in London and looking for love and escape with the woman he calls the Beauty Queen of Leenane.

But the triumph of Orla Fitzgerald’s compelling performance is the gradual revelation that she is not merely disappointed but damaged and delusional. Dangerously so. Her mother’s daughter, no less.

But, unlike her mother, pitiable. Devastatingly good drama.

‘Housewife’ Kandi Burruss making her Broadway debut as a producer