Home » Celebrities » Rachel Riley: ‘That’s on them not me’ Countdown star defends role on show in Twitter clash Rachel Riley: ‘That’s on them not me’ Countdown star defends role on show in Twitter clash

Countdown star Rachel Riley, 33, is currently raising awareness to get children into learning about STEM, which is short for Science, Technology, Engineering and Mathematics. Appearing on Sky News today, Rachel was quizzed about her thoughts on boys being biologically better at the topics than girls. Giving her say, she said girls needed to have more confidence in themselves in becoming a “genius”. Spilling all, she said: “One of the myths that I hear all the time is, especially with girls, they don’t like these subjects because they are more into nurturing and pursuits.

That’s on them not me

“There’s a stereotype problem with maths and science which translates into the gender glass ceiling as well.

“Girls need to believe themselves a little bit more, there’s a lot of studies that show even though girls at the age of six tend to do better than boys at school, they have a perception problem that they are not as good.

“We need to tell the girls, if you enjoy it, you are just as good as the boys.”

Rachel shared the clip of her discussing her views on Twitter in view of her 643,000 followers.

She captioned the video: “Such a rewarding day getting to work with the young scientists and engineers of the future!”

Despite the maths whizz being praised for her antics, one Twitter user said the star was a part of the “stereotype”. 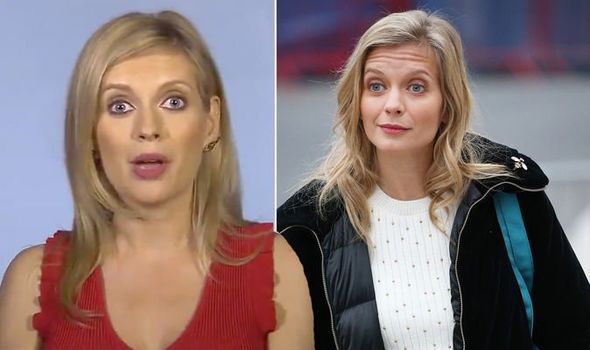 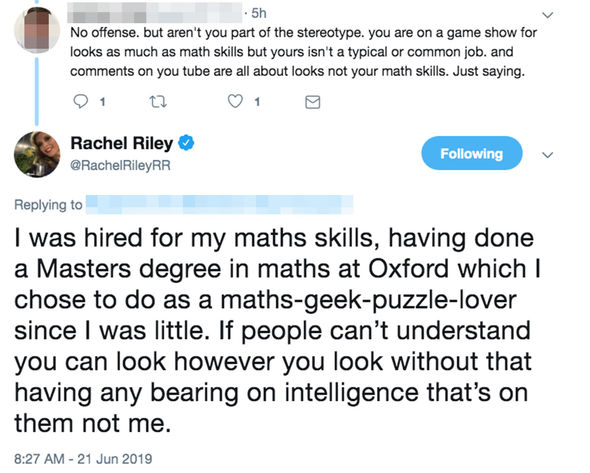 They wrote: “No offense, but aren’t you part of the stereotype.(sic)

“You are on a game show for looks as much as math skills but yours isn’t a typical or common job.

“Comments on Youtube are all about looks not your math skills. Just saying.”

Hitting back at the Twitter user, Rachel commented: “I was hired for my maths skills, having done a Masters degree in maths at Oxford which I chose to do as a maths-geek-puzzle-lover since I was little.

“If people can’t understand you can look however you look without that having any bearing on intelligence that’s on them not me.”

Rachel later shared various snaps of her mingling with secondary school children, in which she showcased her blossoming pregnancy bump.

Wearing a tight-fitting red dress, she took selfies and posed alongside winners of the Bright Ideas challenge. 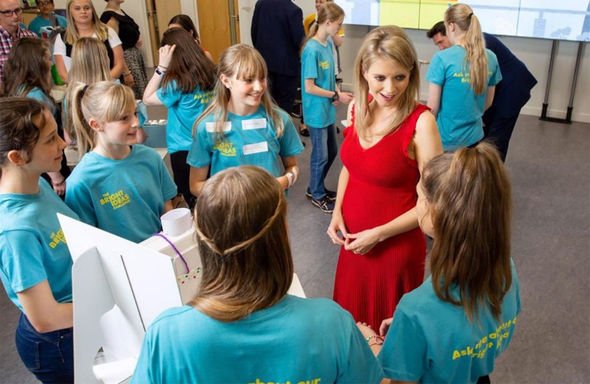 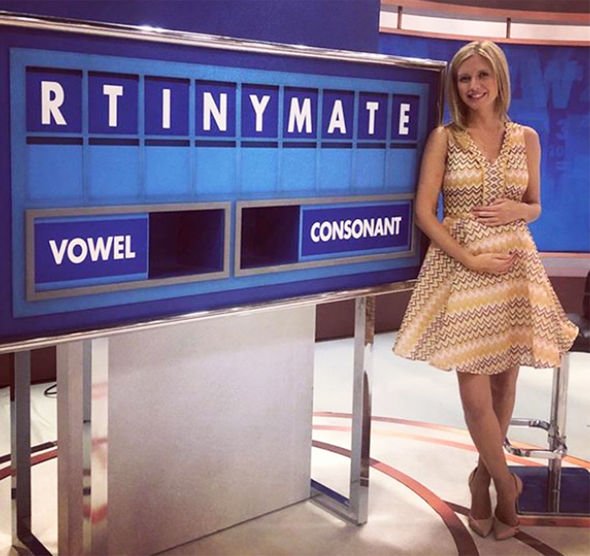 She commented: “So impressed with the @Shell_UKLtd #BrightIdeasChallenge winners – they’ve come up with amazing future energy solutions using hydropower, piezoelectricity and more – it’s been inspiring spending the day with these innovative young minds.

“Congrats to all these bright sparks! #ad.”

The blonde beauty is believed to be in her first trimester of her pregnancy with her boyfriend Pasha Kovalev, 39.

Rachel announced her pregnancy news in the form of a conundrum last month.

Cradling her small bump, she stood in front of the iconic Countdown board, beaming for the camera.

She commented: “Pash and I have a conundrum for you…you have till December to work it out! We’re over the moon excited.”

Argos is selling a mini snooker table and it’s half price at £22.50 – The Sun