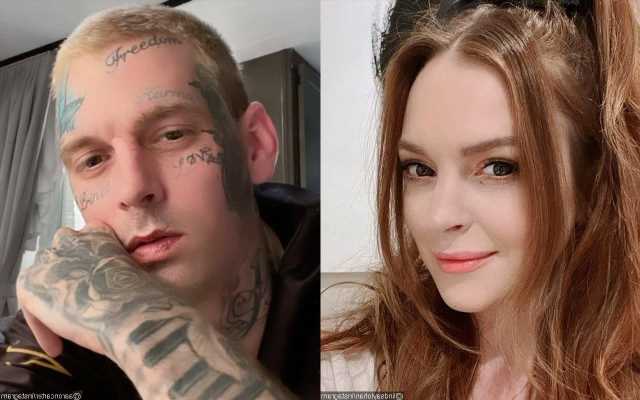 The late ‘I Want Candy’ crooner first dated Hilary Duff for more than a year in 2000 before he overlapped their relationship by romancing the ‘Mean Girls’ actress.

AceShowbiz –Lindsay Lohan has broken her silence on Aaron Carter‘s death. The “Mean Girls” actress, who briefly dated the late singer/rapper in the early 2000s, said there was still a “lot of love” for him and his family.

“My heart goes out to his family and may he rest in peace,” the 36-year-old said when speaking to Entertainment Tonight’s Denny Directo. “And God bless him… and yeah, just [a] lot of love there.”

Lindsay’s statement came after Aaron’s other ex, Hilary Duff, penned a tribute to him on Instagram. “For-Aaron- I’m deeply sorry that life was so hard for you and that you had to struggle in front of the whole world,” the 35-year-old wrote in an Instagram note shared on Saturday, November 5. “You had a charm that was absolutely effervescent … boy did my teenage self love you deeply.”

Aaron passed away at the age of 34 on Saturday. The younger brother of Backstreet Boys‘ Nick Carter was found dead in his home in California and TMZ reported that his body was discovered in the bathtub.

Aaron dated Hilary on and off for about three years. The “Lizzie McGuire” star first dated the “I Want Candy” crooner for more than a year in 2000 before he overlapped their relationship by romancing Lindsay.

In 2005, Aaron opened up about his relationships with the two. “I started dating Hilary [Duff] on my 13th birthday. I was dating her for like a year-and-a-half and then I just got a little bored so I went and I started getting to know Lindsay, dating Lindsay,” he told CNBC.

Aaron, however, admitted that he regretted the breakup. Back in 2014, he declared his love for Hilary on Twitter by saying, “Don’t be that stupid douche that loses the love of your life forever.. Like me… I’ll spend the rest of my life trying to better myself to get back to her. I don’t care what ANY of you think.”

Unfortunately, Hilary did not feel the same as she was married to Mike Comrie at that time. “I don’t know how I feel. I mean, that was so long ago, and obviously I’m still married, and I have a baby and we kind of just… [We] don’t know each other,” the musician, who has been married to Matthew Koma since 2019, pointed out.

3 Outfits That Prove Velvet Is the Fabric of the Season