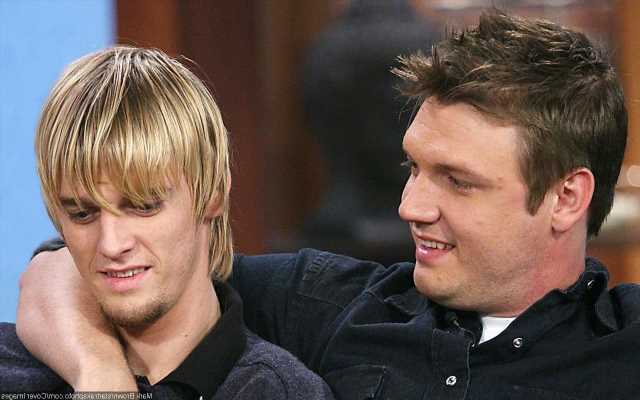 A representative for the ‘I Want Candy’ hitmaker reveals that the late singer ‘was on the path to making amends with so many people in his life,’ including his brother, before his tragic passing.

AceShowbiz -Although their relationship turned sour at one point in their lives, Aaron Carter and his brother Nick Carter were apparently on good terms before the former died. According to his representative, the late singer “had made amends” with “so many people in his life,” including his famous sibling, before his tragic passing on November 5.

The rep tells HollywoodLife.com that after year of clashing, Aaron and Nick “were finally in a good place when [Aaron] died.” In fact, “[Aaron] was on the path to making amends with so many people in his life, and he had made amends and made peace with Nick,” the rep says.

Aaron apparently found some closure with Nick and it made him “happy.” The rep adds, “Aaron was happy about this because he loved his brother. He looked up to Nick in so many ways. They were trying to make everything good again.”

Nick mourned his younger brother’s death in a heartfelt tribute on social media. On Sunday, he wrote on Instagram alongside a series of throwback and childhood images of him with Aaron, “My heart has been broken today. Even though my brother and I have had a complicated relationship, my love for him has never ever faded.”

“I have always held onto the hope, that he would somehow, someday want to walk a healthy path and eventually find the help that he so desperately needed,” he noted of his late brother’s battle with his inner demons. “Sometimes we want to blame someone or something for a loss. But the truth is that addiction and mental illness is the real villain here. I will miss my brother more than anyone will ever know. I love you Chizz. Now you get a chance to finally have some peace you could never find here on earth. God, please take care of my baby brother.”

Nick also broke down in tears during his group Backstreet Boys‘ performance at London’s O2 arena. He cried at the end of group’s song “Incomplete” and was seen being consoled by his bandmates onstage.

Meanwhile, Aaron’s cause of death is currently deferred by the L.A. County Coroner’s Office pending toxicology results. However, more details have surfaced as law enforcement sources tell TMZ that they found multiple cans of compressed air in Aaron’s bathroom and bedroom, as well as prescription pills.

Inhalant abuse, or “huffing” products like compressed air, can cause permanent brain damage that can lead to irreversible neurological deficits, according to the American Addiction Centers. Huffing can also lead to seizures, coma and sudden cardiac death, even for first-time users, reports the Cleveland Clinic. Additionally, replacement of oxygen in the lungs with toxic fumes from inhalants can result in asphyxiation.

It’s not clear though if that’s what caused him to drown. The enforcement sources also spill that Aaron was last seen alive on Friday at 2 A.M. and was found by his housekeeper on Saturday morning. It’s believed that his body was in the tub for a long time as there was a smell of decomposition and the water had turned an unnatural color.