Pride Month is in full swing, and apps across the internet are adding features to support the LGBTQIA+ community. Back in May 2019, Lyft added gender-neutral pronouns to its platform — and it looks like Instagram is following the company’s lead in its own unique way. How is that, you ask? Well, Instagram’s new "Custom" gender option is here, and it’ll let IG users choose exactly how they want to be identified. On top of that, the photo-sharing platform is introducing new limited-time rainbow features and hashtags that’ll help you celebrate Pride with every post.

Before I get into the company’s latest rainbow additions, let’s talk about its new gender-choosing feature. According to Instagram, the app added a new option on its Gender page that’ll let you pick a "Custom" gender choice, such as "Gender Nonconforming." You can also choose "Prefer Not to Say" if you’d rather not advertise your gender. This is different from the platform’s previous choices, which only included "Not Specified," "Male," and "Female." To customize a gender option, hit "Edit Profile" and scroll down until you see "Gender." Then, choose whichever option you prefer.

If you don’t see the new "Custom" choice, don’t panic. Instagram’s new Pride features — including this one — are "rolling out this week," per the app. With that being said, check back in a few days to see if you have the new selections yet. 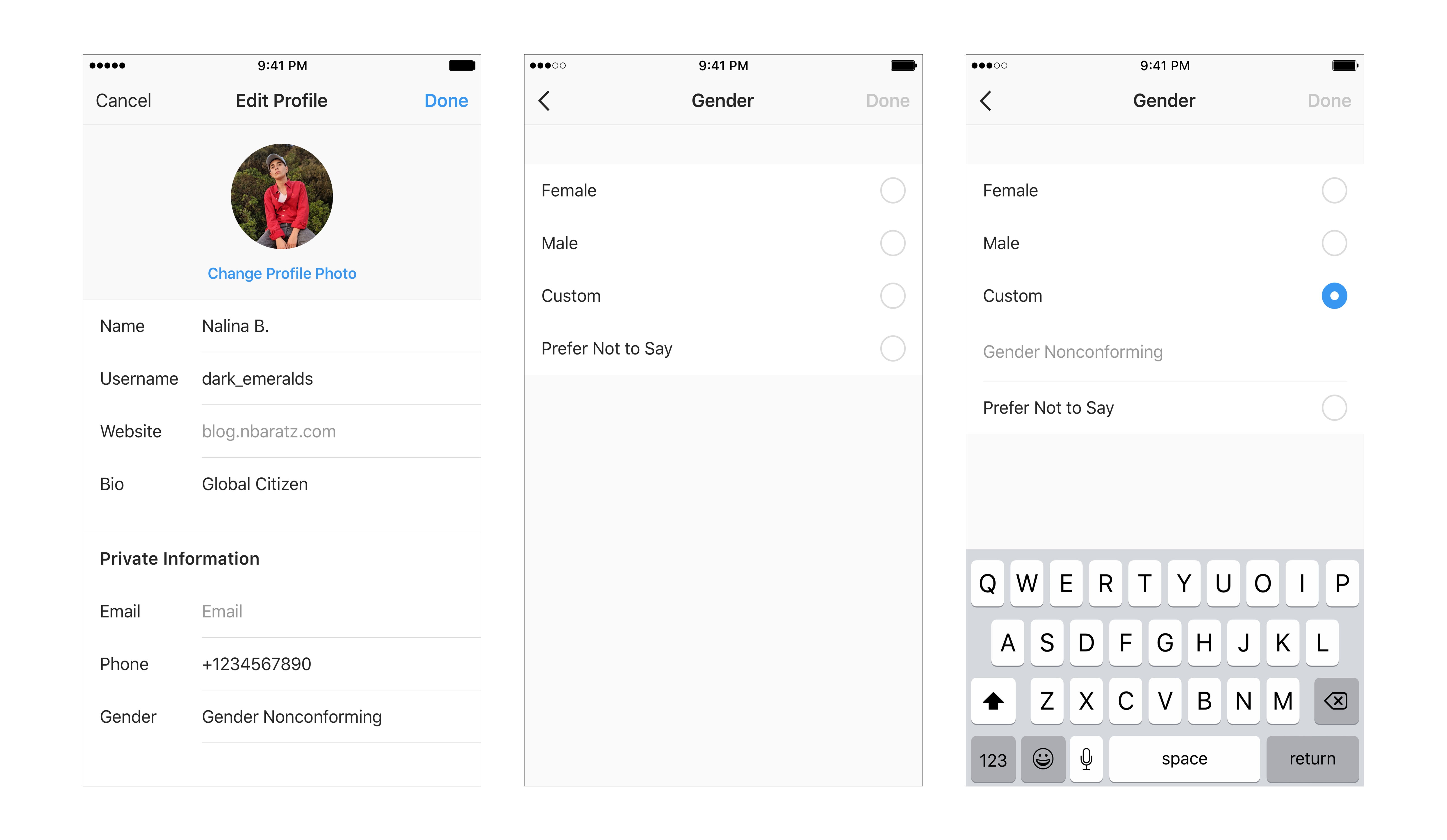 New gender options aren’t the only new features that Instagram has up its sleeve for Pride. In addition to the inclusive selections, the app introduced a new way to celebrate Pride through Stories. Apparently, those of you who use popular Pride hashtags in your Stories throughout the month of June will receive a rainbow ring around your Story icons when they show up in a row above your followers’ Feeds. For reference, those rings are usually red or green in color, depending on who you’re sharing your Stories with.

Speaking of rainbow Instagram features, let’s talk about hashtags. Similar to what the app did in 2018, popular Pride hashtags will show up in gradient rainbow colors when they’re used in your Feed. Apparently, Instagram and GLAAD teamed up to identify those hashtags — and a few of ’em include #bornperfect, #equalitymatters, #lgbtq, and more. In other words, if you use those hashtags in your photo captions throughout the month of June, they’ll be written in rainbow colors.

While I’m on the topic of hashtags, let’s chat about the company’s new Pride hashtag, #UntoldPride. According to Instagram, it was created to give users a space to share personal stories or learn more about the LGBTQIA+ community through the app. So, if you have a Pride-related post you’d like to share, add the #UntoldPride hashtag to reach a wider audience.

In honor of Pride 2019, Instagram also teamed up with The Trevor Project to create a self-care guide for Instagram to support its LGBTQIA+ teens (found here). On top of that, the app will unveil 10 Pride-friendly installations in New York City to honor Pride Month. So if you’re visiting The Big Apple and pass by an Installation, take a peek.

As you can see, it’s clear that Instagram is totally involved with Pride Month. Thanks to the company’s new features, you can be, too.