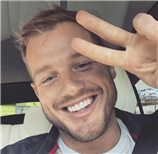 Colton Underwood has dropped yet another bombshell.

In a new cover story interview with Variety, the former Bachelor lead delved into his very personal history, opening up to the magazine about his ex-girlfriend, Cassie Randolph… his decision to come out as gay last month…

… and one disturbing story he never previously shared in public.

“I’ll just say it,” Underwood says in the magazine’s wide-ranging feature – and say it he does, indeed. And then some.

“I, at one point, during my rock bottom and spiral, was getting blackmailed. Nobody knows I was blackmailed.”

According to the television personality, Underwood visited a spa last year known for catering to gay patrons.

I “should never have been there,” he said, claiming he stopped by “just to look.”

Whether that’s true or not is unimportant, because we all know what happened next …

Colton then received an email from someone who alleged to have photos of him naked inside the establishment.

The anonymous sender threatened to “out” the former Bachelor in the press.

That sick threat prompted Underwood to forward the email to his publicist, Alex Spieller.

They eventually agreed that Underwood needed to make the announcement himself at some point down the line; he had to control his own narrative and own up to his sexuality.

“I came to terms with that earlier this year, and the next step in all of this was sort of letting people know.”

Underwood deserves nothing but praise for taking this step. It was brave of him to do so.

But Colton was also accused last year of stalking Randolph after their split.

She told the authorities he even placed a tracking device on her car and ended up getting a restraining order against her ex.

In November, the pair settled their differences and signed an agreement, which means Underwood can’t speak in great detail about what happened.

However, he acknowledges having acted in an inappropriate manner and spoke to Variety about a petition on Change.org.

It has been signed by 35,000 people to date and its aim is to pressure Netflix to cancel an upcoming Underwood series due to these allegations.

“I did not physically touch or physically abuse Cassie in any way, shape or form,” Colton says now.

“I never want people to think that I’m coming out to change the narrative, or to brush over and not take responsibility for my actions, and now that I have this gay life that I don’t have to address my past as a straight man.”

“Controlling situations to try to grasp at any part of the straight fantasy that I was trying to live out was so wrong.”

Cassie has said very little about Underwood’s sexual orientation reveal, and even less about what transpired between them last summer.

“It’s not who I am as a human being, and it’s not how I carry myself,” Underwood continued to Variety.

“If there was anything I could do to take more ownership, I would.”

“I want this interview to be the last time I address her, because it’s not fair for her to have her name in articles every time I talk.”

“I’m sorry, and I want her to know that I hope she has the best, most beautiful life.”

He admits to Variety that he took an excessive amount of pills in the summer, recalling:

“That was the saddest and most confused and most hurt [feeling].”

Colton – who has previously said that he questioned his sexuality way back in high school – also confesses here for the first time that he did fool around with men prior to striking it big on reality TV.

“I’ll say this. I was ‘the Virgin Bachelor,’ but I did experiment with men prior to being on The Bachelorette.”

“I want to make that very clear that I did not have sex with a man, prior to that,” he adds.

Semantics aside, Underwood said he felt “so guilty” during his relations with men.

Nevertheless, he joined Grindr under an alias in 2016.

“It was my first time letting myself even go there,” he said of trying out the dating app.

“So much so that I was like, ‘I need The Bachelorette in my life, so I could be straight.'”

Pretty incredible admissions all around – whatever you think of some of his decisions.

How is he feeling and doing these days?

After coming clean in so many ways, like never before?

“I’m the happiest and healthiest I’ve ever been in my life,” he tells Variety.

“That means the world to me.”

There’s a lot to unpack here.

Where do YOU stand on Colton’s story? Will you be watching his upcoming Netflix program?