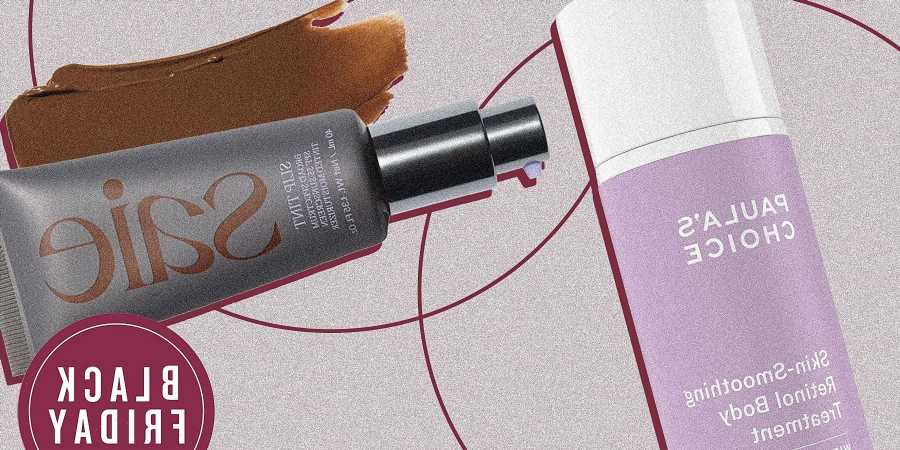 As a beauty writer, it's part of my job to keep tabs on what celebrities are up to beauty-wise (read: watch their Instagram stories non-stop). Going by social media alone, stars like Kim Kardashian receive an obscene amount of freebies each day — I imagine the family has a close, personal relationship with their UPS driver. So when people like Kristen Bell, Liv Tyler, and Cynthia Erivo spill the beans on what they actually use, you can bet I take notes. And come Black Friday, it's time to clean up.

Thanks to copious holiday sales, everything from Naomi Campbell's face toner to Jennifer Aniston's body lotion is newly marked-down, meaning you can score a celebrity-approved beauty routine for way less money. Ahead, there's the vitamin C serum that makes an HBO star's skin glow in high resolution, the retinol treatment that gives Jennifer Garner's skin its bounce, and the silk-infused mascara that Cindy Crawford turns to for long, luscious lashes. Considering Bell's clear, even complexion on projects like Queenpins and The Good Place, it was surprising when she revealed to Vogue earlier this year that her skin naturally runs ruddy. To keep the redness in check, she uses a duo of expensive serums from iS Clinical and Skinceuticals, topped by Saie's tinted moisturizer-SPF hybrid. Shoppers say that the forgiving formula blurs out pores and fine lines (and doesn't sink into them), and they'll stick with it for life. TruSkin's vitamin C serum is a legend fit for the history books. Despite coming from a brand outside the realm of Sephora, Ulta, and Nordstrom, its serum ranks as one of Amazon's skincare best-sellers — and when Alexandra Daddario pulled it out of her medicine cabinet during a video for Vogue, the serum's reputation only grew. Over 58,000 Amazon shoppers decree it worthy of a full five-star rating, and its reviews are littered with phrases like "best $20 ever spent," "unbelievable," and "kicks wrinkles' butt." Is Jennifer Garner the most likable person in the entire world? I don't know, but I do think that if she and Reese Witherspoon ever ran for office together, America would be a happier place. My dreams aside, Garner's accessible persona is solidified by her rock-solid drugstore skincare routine. The actress, activist, TikTok star, and Neutrogena spokesperson frequently mentions her love for the brand's Rapid Wrinkle Repair Retinol Oil in interviews, and reviewers agree that it rivals way more expensive formulas. "After two weeks, the wrinkles around my mouth and eyes are literally being erased," one user wrote. "My skin feels completely different." Retinol is the gold standard for anti-aging, which is why countless people in the public eye turn to it to extend their skin's youthful look. Australian supermodel Andreja Pejić, for example, told Refinery29 that she uses Paula's Choice Retinol Skin-Smoothing Body Treatment for a very specific reason: "I personally love the, 'OMG, wow, your skin is the smoothest thing ever!' reaction." The retinol treatment does the trick; reviewers agree that it fades wrinkles, minimizes scars and cellulite, and leaves their necks, chests, and hands feeling silky smooth. "This is the ONLY product that has helped diminish my 10-year-old stretch marks," wrote a fan. "I've tried everything, and I'm so glad I gave this a shot." These Are the Black Friday Amazon Device Deals Worth Caring About