You'll never guess where we slept! The world's wackiest places to stay

You’ll never guess where we SLEPT! An underwater bed. A hut on skis. A hotel in a crane… the world’s wackiest places to stay

Blasé about top-end hotels, or Premier Inns and Travelodges?

Never fear — websites are overflowing with madcap options, from sleeping in a former Soviet prison to a suite in a crane in Amsterdam, and a hut in the Arctic. Here are ten of the wackiest…

Bed down on an Arctic lake

At Lake Inari in the far north of Finland, you can be towed in a little hut by a snowmobile and deposited on a frozen lake for the night

Imagine being towed in a little hut by a snowmobile and deposited on a frozen lake in the Arctic wilderness each night. That’s what’s on offer at Lake Inari in the far north of Finland: a mobile snug for two, with windows and a glass ceiling to see the Northern Lights from your bed.

Splash out on the wood-fired hot tub, an optional extra towed in your wake. There are toilets, and showers at base camp. Ice-fishing and husky sledding can be arranged. Available November to April.

HOW TO DO IT: Finnair (finnair.com) London to Ivalo from £279 return until March 22. A one-hour shuttle to Lake Inari from £22, one-way (kuljetusliikeilmarislant.fi). Cabins from £238, based on two sharing (lakeinari.com).

Join the circus in Spain 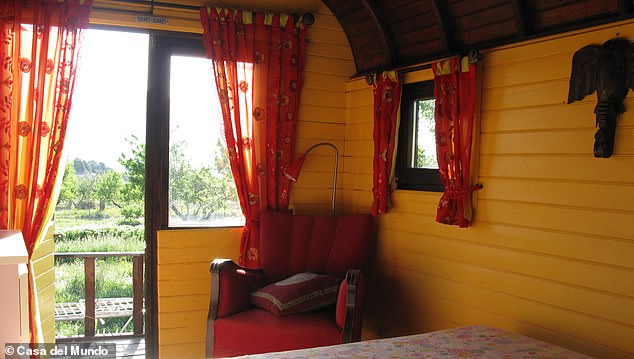 Inside the Elephant Trainer’s Wagon, which once belonged to a circus, at Casa del Mundo near Alicante

The Elephant Trainer’s Wagon, which once belonged to a circus, is one of seven places to stay at the resort of Casa del Mundo. Inland, amid lush gardens, it’s a half-hour drive from Alicante in southern Spain.

The wagon is rented alongside the neighbouring caravan, Punjab. Inside are polished wooden floors and painted walls, while outside a canopy shades two outdoor chairs. Each wagon sleeps two and they share a central kitchen and bathroom. The on-site restaurant serves international delicacies, and beaches are 12 miles away.

HOW TO DO IT: Ryanair (ryanair.com) London to Alicante from £25 return. A stay at Casa del Mundo costs from £140 for two days (casadelmundo.nl).

Stay in a Solent fort 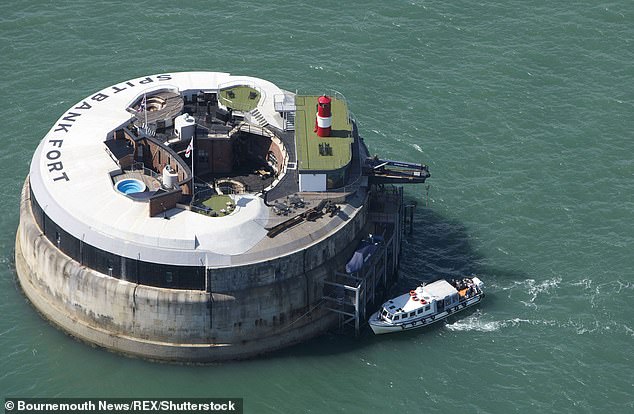 Spitbank, a former fort in the Solent, which has been converted into a hotel with eight bedrooms

One of four Solent forts known as Palmerston’s Follies, Spitbank was built to protect against invasion by Napoleon III and completed in 1878. A £2 million investment saw the fort, a 15-minute boat ride from Portsmouth, converted into a hotel with eight bedrooms, some in former gun emplacements, with gun port windows and a penthouse suite in the lighthouse.

There’s a hot pool, and some unusual games on offer, such as whacking biodegradable golf balls off the roof into the Solent and laser battles in the basement.

HOW TO DO IT: Doubles from £599, full board, including ferry transfers (solentforts.com). 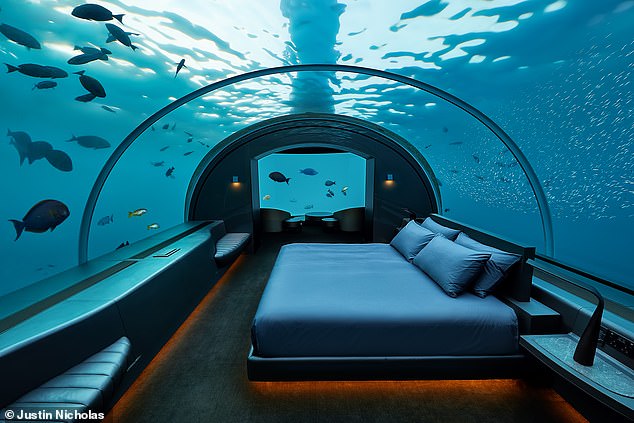 The two-level Muraka suite at Conrad Maldives Rangali Island, where half of the suite is underwater

Over-water villas in the Maldives are so passé. Now it’s all about going underwater. Conrad Maldives Rangali Island, in the South Ari Atoll, has created a new two-level Muraka suite, half of which is 16ft below the surface of the Indian Ocean.

Above sea level there is a private infinity pool; downstairs it’s a spacious, ultra-modern villa with a glass viewing tunnel. Arrival is by speedboat or seaplane only.

Night in a Latvian jail 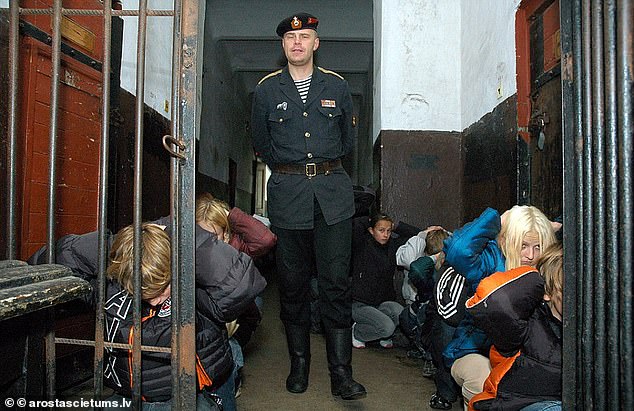 In Liepaja, Latvia, you can spend the night in Karosta, a former prison, where there are food rations and hard beds

A night in Karosta, a former prison in Liepaja, Latvia, is not for the faint-hearted. Built around 1900, it was once a Soviet military jail. Guests sign a consent form for the full ‘Extreme Night’ experience. Expect food rations, compulsory exercise, orders from guards and a spartan cell with a hard bed.

Survive the night and you will be rewarded with a guided tour the next day. Open May to November.

HOW TO DO IT: Wizz Air (wizzair.com) London to Riga from £52 return. Buses from Riga to Liepaja start at £6 one-way (rome2rio.com). Rooms from £15pp, excluding meals (unusualhotelsoftheworld.com). 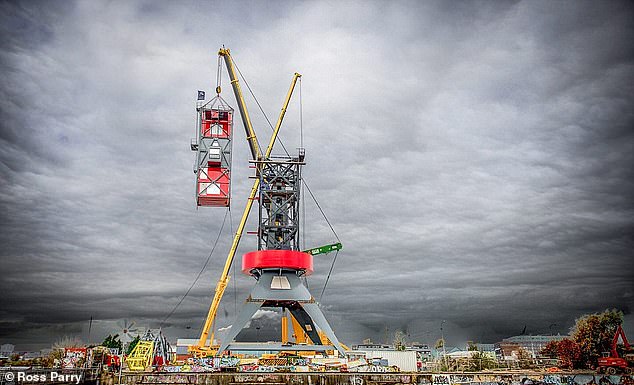 Faralda, pictured, a crane hotel in the trendy NDSM neighbourhood of Amsterdam

A short hop by ferry across the River IJ from central Amsterdam is Faralda, a crane hotel in the trendy NDSM neighbourhood, a former shipyard turned cultural hotspot.

Three luxury suites stacked on top of each other have been fitted to the interior of the crane, 50 metres above ground. There’s also a panorama lounge and Jacuzzi (which costs extra) on the top deck. There are no ladders: a lift whisks you up to your room.

HOW TO DO IT: EasyJet (easyjet.com) London to Amsterdam from £36 return. Suites from £578, including a bottle of wine, coffee, tea and a personal welcome package (faralda.com). 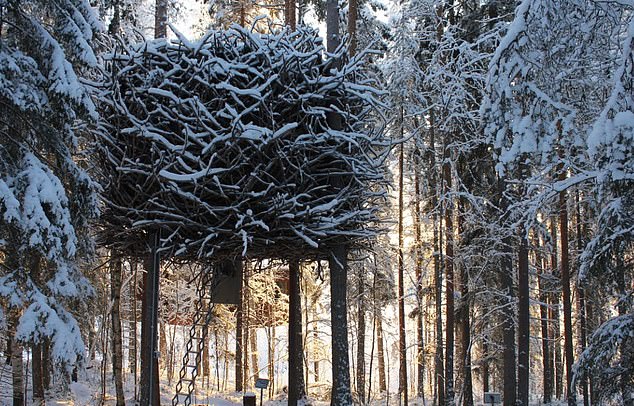 The Bird’s Nest, a twig-covered treehouse with two bedrooms in Norrbotten, Sweden

The Bird’s Nest in Norrbotten, Sweden, is a twig-covered treehouse-with-a-difference. Each of the six nests is wood-panelled inside, with two bedrooms, a living area and a toilet. It is accessed via a retractable electronic ladder and has underfloor heating.

There are two saunas near by and meals are taken at ‘base camp’ —the 1950s Treehotel Guesthouse, a ten-minute walk away.

HOW TO DO IT: Norwegian Airlines (norwegian.com) London to Lulea via Stockholm from £184 return. Rooms from £379 B&B, including transfers from Lulea (treehotel.se).

Be a Bond baddie in Oz

The Pole House, south of Melbourne, juts out on a plinth above Fairhaven Beach, on the Great Ocean Road, accessed via a 28-metre walkway.

Diamond-shaped, it is mounted on a 40-metre pillar with a retracting glass frontage. A winter woodburner hangs from the ceiling and there are touch-of-a-button features — you can imagine a James Bond villain such as Scaramanga ensconced in this eyrie.

HOW TO DO IT: Emirates (emirates.com) London to Melbourne via Dubai from £705 return. House from £364 a night (coolstays.com). 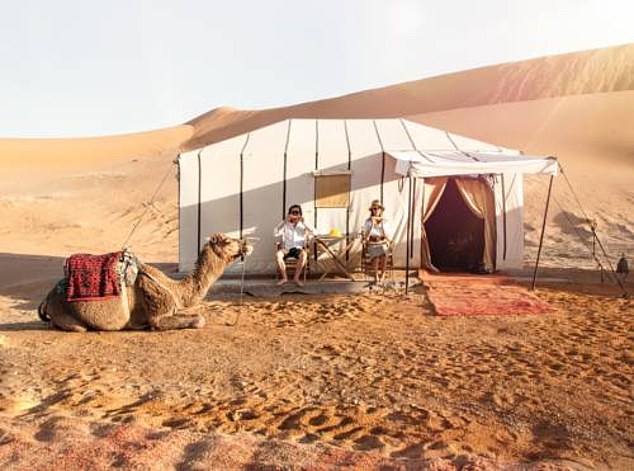 One of the Merzouga desert tents in Erg Chebbi, Morocco, an eight-hour drive from Fez

Live the desert dream in the Sahara in one of five glamorous tents in Erg Chebbi, Morocco, an eight-hour drive from Fez (you’ll need a 4×4 and a driver).

The Merzouga desert tents are based on nomadic camel-skin homes but upgraded with local furniture and bathrooms.

You’ll dine beneath the stars, and an array of quad bikes, four-wheel drives and camels is available to help you explore.

HOW TO DO IT: Ryanair (ryanair.com) London to Fez from £63 return. Car hire and driver extra. Double tents from £270 B&B, including dinner and a camel ride (merzougaluxurydesertcamps.com).

On the Sussex bus

Oak flooring, a wood-burning stove and bespoke kitchen aren’t what you’d expect to find on a double-decker, but the Big Green Bus in East Sussex is special.

Rescued from the scrapheap, it is parked in a field near Whitesmith, Lewes. The top-deck bedrooms sleep six, there are indoor /outdoor showers and an alfresco hot tub.

HOW TO DO IT: Bus costs £195 per night, based on two sharing. Hot tub extra (canopyandstars.co.uk).