NEW ORLEANS — A tropical disturbance over Mexico’s Yucatan Peninsula was being eyed Tuesday by New Orleans authorities, who fear it could become a tropical depression or storm that would topple a partially collapsed building and two huge construction cranes onto neighboring buildings at the edge of the city’s historic French Quarter.

It was the latest grim news delivered near the site where two people died Saturday morning as the upper floors of a hotel under construction came tumbling down in a cloud of blinding dust. One body remained in the rubble Tuesday evening and hopes that a missing worker will be found alive in the wreckage were dimming after four days of risky searches.

Fire Chief Tim McConnell said searchers using dogs and high-tech equipment were able to get a partial view of the body known to be in the building but were unable to reach it or find the missing worker. Searchers found an unidentifiable fluid in the area that they collected. It will be tested to determine if it was from a human body and whether it could be used to identify either victim. 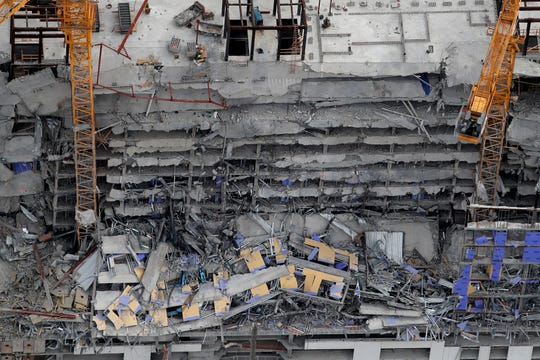 Meanwhile, a viable plan remained elusive for stabilizing the remains of the building and two badly damaged cranes towering over the site — one McConnell estimated at close to 270 feet high, the other around 300 feet.

The city’s initial plan to bring in other huge cranes to try to remove the existing ones was nixed by engineers, McConnell said. An idea to try to attach one of the cranes back to the building to try to stabilize it also was rejected. “They were against moving it in any way, shape or form and didn’t believe it was safe enough to even work around it,” he said.

McConnell, accompanied by New Orleans Homeland Security Director Collin Arnold, Mayor LaToya Cantrell and other city officials, said authorities are satisfied that a blocks-long evacuation area around the damaged structures is sufficient, if obeyed, to keep anyone else from being harmed if the structures fall.

But, if no way is found to stabilize the building and cranes, neighboring buildings and infrastructure at the intersection of usually busy Canal and Rampart streets are in danger of disastrous damage.

Any wind and rain is a concern, officials said, saying wind could sway the cranes and rain could loosen dangling debris.

“This could become a tropical depression, maybe a tropical storm,” Arnold said of the disturbance over the Yucatan, which forecasters gave a 40% chance of development somewhere over the Gulf.

“With that you could expect south, southwest winds on this track, 20, 30, 35 miles an hour and the rain that would accompany that,” Arnold said.

Experts from around the world were called in to help, including crane manufacturers and engineers and the Thornton Tomasetti engineering and consulting firm that aided in the cleanup and recovery at Ground Zero after the 9/11 terrorist attacks.

The prolonged danger of further collapse means the indefinite closure of two major thoroughfares — Canal Street and the intersecting Rampart Street — along with streetcar lines and bus routes adjacent to the French Quarter and business district. 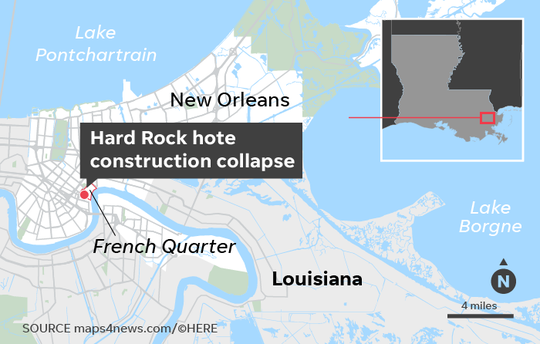 The 18-story Hard Rock Hotel was expected to be a major boost to the revitalization efforts for Canal Street in New Orleans. (Photo: Karl Gelles)

The disaster also was the latest setback in efforts to revive a section of historic Canal Street that had been economically moribund despite its proximity to the Quarter. A popular new restaurant had opened on the block in recent years. And fire-ravaged buildings across the street are being redeveloped into retail and residential projects.

The 18-story Hard Rock Hotel was expected to be a major boost to that revitalization.

Now, because of the danger of further collapse, commerce around the site has come crashing to a halt of uncertain duration.

Among the businesses in the danger zone was the Saenger Theatre on Canal, a 1927 movie and live performance palace restored to its flapper-era glory in 2013, eight years after it was badly flooded because of levee failures during Hurricane Katrina. Touring versions of Broadway hits have been a success at the Saenger but performances of “Wicked” that were supposed to run through this week were canceled and the future of other productions is unclear.

Also closed was the tony New Orleans Athletic Club, which was constructed on Rampart in the 1920s and boasted a celebrity guest list that over the years has included Tennessee Williams, Johnny Weismuller and Govs. Huey and Earl Long. The facility emailed members that it had arranged for other fitness centers to accommodate their workouts during the closure.

“It’s autumn and I’m single – where did all my coupled-up friends go?”
Entertainment