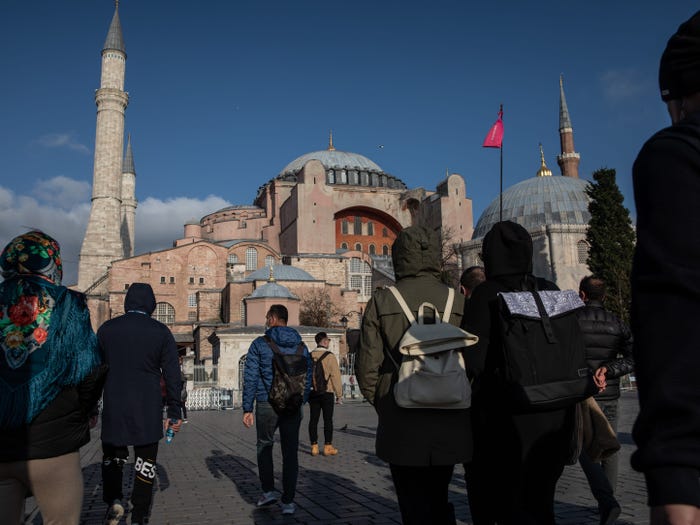 Amid a spike in the number of coronavirus cases across Turkey, the country's capital Istanbul instituted a lockdown, following in the footsteps of many other European countries grappling with another wave.

However, the strict lockdown is in effect on weekends only.

It also doesn't apply to tourists.

While Istanbul locals were forced to stay inside between 9 p.m. Friday and 5 a.m. Monday, international tourists were able to freely walk around the city.

The New York Times reports that most museums stayed open for visitors. Hotel restaurants were allowed to remain open, but only to hotel guests.

The lockdown was monitored by police, according to the New York Times, who checked IDs to make sure locals, besides essential workers, stayed home. Anyone found breaking the lockdown was fined around 3,150 Turkish lira, or the equivalent of $400 at today's conversion rates.

Turkey is seeing a massive surge in coronavirus cases, but tourists remain undeterred

April, a 27-year-old financial analyst, spent three days in Istanbul on her way home to Singapore. She previously spent some time in London and Finland, where her boyfriend lives.

Direct flights between Istanbul and Singapore and no quarantine or testing requirements made this an easy layover, though she said she had booked it long before the surging coronavirus cases.

"At the beginning, I was a little fearful, but I decided that I would probably regret not taking this opportunity when it is available to me, hence I decided to just go for it," she told Insider, adding that she took every available precaution to stay safe.

She added that since so much was closed during the lockdown, she didn't feel like tourists really enjoyed many special advantages. She also said that in her experience, most locals did not seem resentful of tourists, and seemed supportive of the government's actions.

A few locals Insider spoke to did say it was important to keep the struggling tourism sector afloat: according to the World Travel & Tourism Council, 9.4% of Turkey's total employment is tourism-related.

"The streets were quite empty and it could be a little scary to be out alone at night, especially as a solo female traveler," she said of the weekend lockdown, but added that the locals were friendly and she enjoyed visiting the Hagia Sophia with what she assumed was only a fraction of the usual crowds.

She advised tourists to carry their passports with them, because of the frequent checkpoints she encountered.

"As to whether my decision is worth it, I personally believe that life is all about weighing the risks and making the appropriate choices. […] While it seems to many that I have taken unnecessary risk during such a period, I believe that my experiences have been worth it," she said.

Alexandré Worthington, a 28-year-old realtor from Gainesville, Florida, chose Istanbul because it's one of few destinations that allow Americans to enter and doesn't require a quarantine.

He told Insider he had an amazing time, as everything during the week was open and business as usual (besides restaurants, which are take-out only). On the weekend, during the lockdown, he said the streets were a lot less busy, though "there was still a lot of movement," and that while most local shops and restaurants were closed many "tourist type" venues were still open, though he said that police wouldn't allow locals in.

"Honestly, it doesn't make sense," he said of the partial lockdown. "Especially in my case, I had a guide and he couldn't take me to many parts of the city. I had to go on my own because of it."

According to the Johns Hopkins Coronavirus Resource Center, at the time of writing, Turkey saw over 1.8 million confirmed cases of the coronavirus and over 16,400 deaths. December saw a record number of new cases, with over 30 times the average number of daily reported cases than in previous months.

However, a few local sources told Insider that they believed that the government purposefully misrepresented the number of cases for months, making the situation look better than it really was. It's not a new theory — as the AP reports, Turkey's government has been accused by the Turkish Medical Association of underreporting cases by only counting those positive cases that displayed symptoms, instead of all positive cases. Per Reuters, Turkey's Health Ministry began reporting asymptomatic cases as well as symptomatic cases on November 25.

The country is currently reporting over 30,000 new infections a day, and the number of deaths from the coronavirus has more than doubled in the last three weeks.

According to the AP, Turkey now ranks fourth in the world in terms of the number of new cases, behind much larger countries like the United States, India, and Brazil.

Turkey reopened its borders to visitors — including US citizens — back in June. While the US Embassy and Consulate in Turkey said that while tourists are checked for symptoms on arrival, and must self-isolate if suspected of having COVID-19, Turkey does not require negative coronavirus test results, nor does it make quarantine mandatory.

"Return to lockdown policies, even partial, is an indication that a country did not invest in the public health infrastructure needed to keep cases to a manageable level," Dr. Amesh Adalja, senior scholar with a focus on emerging infectious diseases at the Johns Hopkins University Center for Health Security, told Insider.

"I suspect that these measures will have only a marginal impact on cases and would favor an approach that was targeted to how people are getting infected there," he said of Istanbul's partial, locals-only lockdown.

Dr. Preeti Malani, chief health officer and professor of medicine in the division of infectious diseases at the University of Michigan, told Insider he suspects the current lockdown policies are an attempt to keep Turkey's tourism industry afloat. However, he pointed out that tourists "do not spend time in a vacuum."

"Cases have been surging in Turkey for the past few weeks so the public health officials will need to keep a close eye on case counts and ensure good adherence to general mitigation, including by tourists," he told Insider.

Locals see the need for keeping the tourism sector afloat, but don't think a partial lockdown is the answer

Data from Turkey's Ministry of Culture and Tourism shows that the number of foreign visitors to Turkey shrunk by over 72% between January and October 2020, compared to the same period in 2019.

According to the World Travel & Tourism Council's annual Economic Impact Report, tourism in 2019 accounted for 9.4% of Turkey's workforce, and 11.3% of its economy. The New York Times estimates that Turkey's tourism revenue in 2020 will be closer to $11 billion, a drop of $24 billion year-over-year.

Aykut has been a travel guide in Istanbul for 13 years. As much as he appreciates the government's attempt at keeping the tourism economy going, he thinks it's ill-advised.

"People are not happy," he told Insider. "They think that there should be a lockdown for everyone."

He says that most tourists recently have been from Russia and Ukraine, where there used to be more Europeans and Americans. These tourists, according to him, are not spending much money when in town because they've made the most of cheap hotel and flight packages. Further, most places aren't open during the lockdown, so even if they wanted to spend money, they couldn't.

"They risk their life because it's cheap. And people are not making money from these tourists," he said.

Since Turkey doesn't ask tourists to provide negative coronavirus test results, and with most hospitals at capacity, he worries about these tourists straining already limited resources.

"People are not happy that the tourists are coming here because they're bringing lots more cases," he said, adding that Turkey is hurting economically, and desperately needs the income.

"So the government doesn't care about cases. They just want people to just come here and spend some money," he said.

Semih, another local guide of 12 years, echoes this. "The government actually doesn't care about COVID-19. They just want more money," he told Insider, adding that the more Turkey struggles financially the more reckless the government is getting.

He said that the mostly Russian and Eastern European tourists visiting Istanbul do it because they don't really have many other options amid travel bans. However, he has observed that many of them refuse to wear masks and comply with local coronavirus precautions, which is a huge problem. In Russia, mask requirements and curfews were only recently instituted.

He said that the tourists all seem to be very pleased with having attractions to themselves.

Salih Batkin, a local tour guide for 15 years, also told Insider that the weekend lockdown wasn't a great solution, but said she thinks it's better than doing nothing. She also said it's important to try and keep the struggling tourism sector afloat.

Still, she does admit that the partial lockdown makes her feel unsafe since there's potential for people who have the virus to continue walking the streets and spreading it.

"There has to be an absolute lockdown without any exceptions," Semih said. "It has to include everyone."

Paloma Elsesser Reveals the Importance of Being a Curve Model: "My Participation Isn't Just About Me"