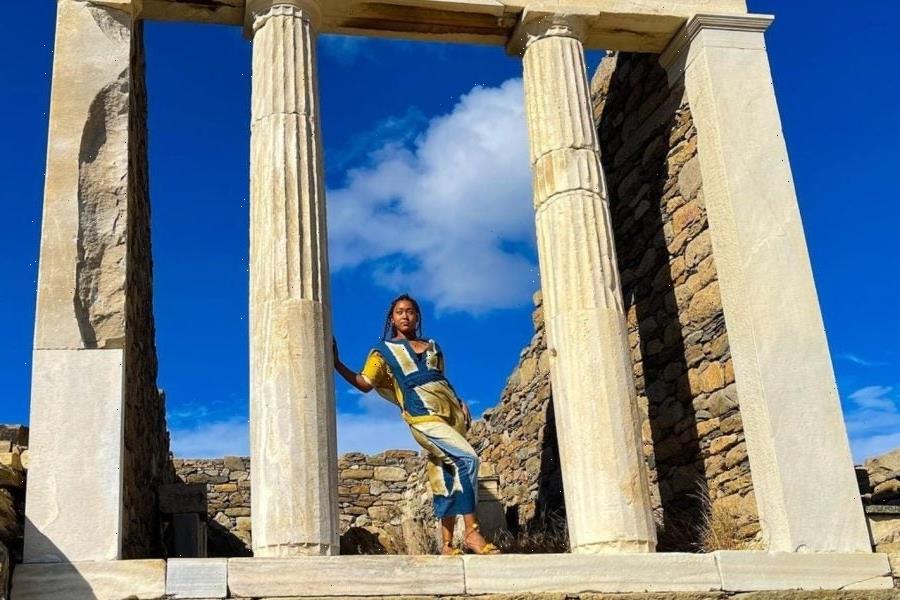 The star giving us some great travel inspiration this week is tennis great Naomi Osaka. The four-time Grand Slam winner is taking advantage of the opportunity to have some adventure and also relax while enjoying the sights and sounds in Greece.

She shared some photos on Wednesday (October 14) of what she’s been able to do during her travels so far, including soaking up the sun on a boat on the island of Mykonos and enjoying photo ops in front of historic sites while wearing some super cute passion twists.

Her most stunning backdrop so far, for those who might be interested in following her footprints during their first or next trip to Greece, is the restored Temple of Isis (III). It can be found on the Greek island of Delos, which is near Mykonos. The archaeological site is the perfect spot, especially with the help of a clear blue sky, for some dreamy shots.

These moments to decompress surrounded by such beauty come at a time when Osaka is taking a break from tennis. After an earlier than expected exit from the U.S. Open in September, which she won twice in the past (2018, 2020), she shared in an emotional message that she needed to take some time away. The decision also followed the revelation that she had been battling bouts of depression since 2018 and wanted to prioritize her mental health (including by forgoing negative questions from reporters in post-match news conferences).

“I feel like for me recently, when I win I don’t feel happy, I feel more like a relief. And then when I lose I feel very sad. And I don’t think that’s normal,” she said last month. “I feel like I’m kind of at this point where I’m trying to figure out what I want to do, and I honestly don’t know when I’m going to play my next tennis match.”

She’s been focusing on other things since. That includes releasing a skincare line called KINLÒ, taping Sesame Street, hitting the road with boyfriend, rapper Cordae, and co-hosting the Met Gala. It seems she’s leaning into the things that make her happiest, including seeing the world, and we’re glad she’s taking the break she deserves and doing so in one of our favorite places!

Dakota Johnson in Gucci at ‘The Lost Daughter’ UK premiere: cute or meh?