When Los Angeles International Airport implemented its new pickup policy for taxi and passengers of ride-hailing services such as Uber and Lyft ahead of Halloween, the scene was described as horrific: Passengers complained about hour-plus wait times for a ride after long flights, and drivers griped over being in line for even longer at the newly-dubbed “LAX-it” pickup area.

But a week later, the new system — which requires arriving travelers who get picked up by taxis, Uber, Lyft and other ride-hailing services to board a shuttle bus or walk to a new area just east of Terminal 1 in order to catch their rides — is far from frightening.

It seems the “swift adjustments in real-time,” that LAX has touted in press releases are working, including extra signage and additional shuttles. (Or perhaps I just commuted on a freakishly slow evening.)

Though I had flown into LAX on Sunday night – and asked a (saintly) friend to come pick me up curbside from the airport to avoid the long LAX-it lines I’d heard about – I returned to the airport on Tuesday night to see whether I should continue living in fear of LAX-it.

My mission: I would head to LAX during rush hour, hop on an LAX-it shuttle and use a ride app to get back to USA TODAY’s L.A. office.

Disclaimer: Tuesday is historically less busy for flights than weekends, but that was the night I was available for this task – one week after LAX first rolled out its new pickup system. 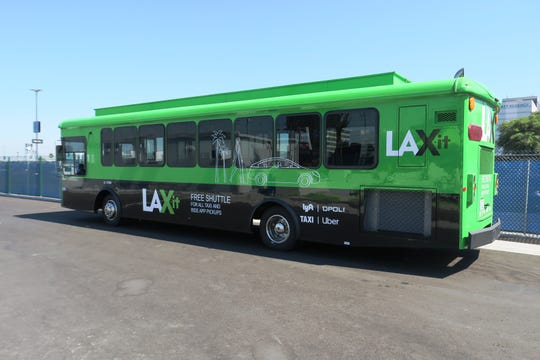 The green LAX-it shuttle picks up passengers from all of the terminals and brings them to a new designated pickup area for hailing cabs, Ubers and Lyft rides. (Photo: Los Angeles World Airports)

The Uber, Lyft rides to and from LAX: Swift!

I take Uber and Lyft rides to and from the airport often, and I’ve found that driving to LAX from the office during rush hour can take an atrocious 45 minutes. On Tuesday, the Lyft (that service was the cheaper of the two at the time) to Terminal 5 at 6 p.m. took a breezy 13 minutes. I was astounded by the lack of traffic as was my driver, who joked that he accidentally drove to (the smaller, less-congested) Hollywood Burbank Airport when he dropped me off curbside, which is still allowed for departures.

The Uber I hailed at the LAX-it lot (Uber was cheaper this time) took just more than 10 minutes to drive to the office (this ride can take up to 30 minutes).

The Lyft driver who drove me to the airport from work admitted that he had been turning off his Lyft app this week after dropping passengers off at the airport to avoid getting pinged to pick up someone at the LAX-it lot.

The Uber driver who took me from the lot back to work said he only waited in line 10 minutes to get me – after he had waited for two hours the previous Tuesday, which was when LAX-it opened.

The shuttle bus: It arrived in moments

After I went to the first floor and was greeted with signs about the “New!” LAX-it system, I stepped outside to face yet another poster, this time with directions on how to find the shuttle to the pickup lot. But I didn’t even need to check the map because not a minute later, two of the impossible-to-miss lime green LAX-it buses were at my terminal, and an airport employee announced that passengers for “Uber, Lyft and taxis” should take it. I did as I was told, along with about a half a dozen others.

Eight minutes later, we collected all of our luggage (my tiny backpack) and emerged onto the green-umbrella-covered lot with its many letters and numbers. 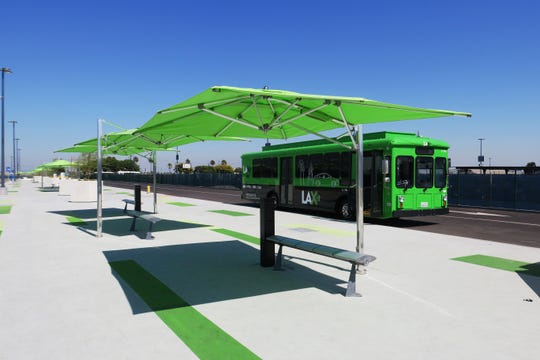 Finding my ride: The most challenging part

Instead of connecting me with a specific driver, my Uber app directed me to a certain pickup zone (3A & 4A), where I was to queue for the next available driver and give him/her a number that appeared on my app. Signs told me to have my 6-digit PIN ready. But I needed help finding exactly where I was to meet a driver and show this special code.

I thought I could intuit that the sign for 3A was right near 3C. This thinking proved to be incorrect, as some very friendly employees explained. But one “Have a nice night, honey!” and a few-yard-walk later, I was in the right spot and in a line of about half a dozen people. (Note: The cab line, which doesn’t require an app reservation, had plenty of vehicles and was about 20-people deep when I arrived.)

I was far from the only one who got lost at the lot: I talked to a couple who had trouble locating the Uber line so gave up and ordered a Lyft instead, since the pink-uniformed Lyft employees were easier to spot.

Travelers arriving at LAX might have to schlep to a shuttle, but there's a good chance that the roads to get to the LAX-it lot are less congested than they were. (Photo: Damian Dovarganes/AP)

In my experience — which, again, was on a mellow Tuesday night — there was plenty of signage and more than enough airport and ride-share employees to show me where to go. But here are some additional tips that will help if you find yourself in need of a pickup at LAX:

1. Hail a car before arriving at the pickup lot. I got a good deal for a car that I requested as soon as I sat on the shuttle, but a woman I talked to at LAX said that she waited to arrive at the lot before calling her car and was met with surge pricing.

2. Passengers aren’t penalized for arriving later than a driver because the apps give PIN numbers instead of pickup times. The caveat: The app gives you no estimated wait time, so it’s difficult to predict how long you’ll be waiting and which service will be fastest.

3. Upscale Uber Black cars will still pick up passengers curbside, for a price. And many hotels have shuttles that drive guests right from the departures level. The airport also has “Flyaway” buses that travel to places including Hollywood and downtown L.A.

That being said, the most stress-free way to exit the airport is still the old-fashioned one: Via a reliable friend. (Thank you, Chrissy!)